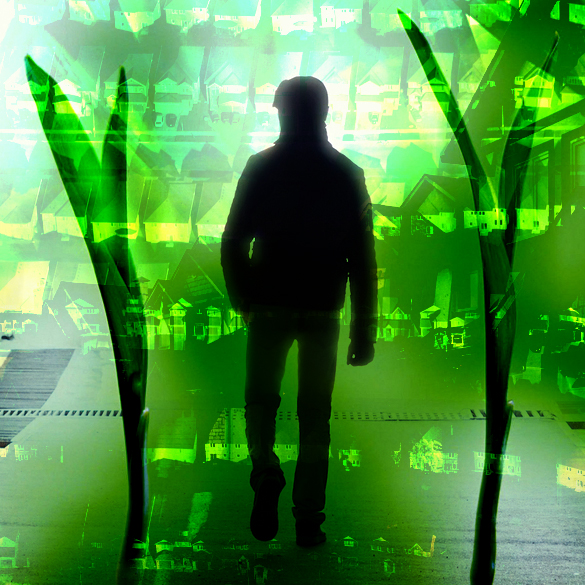 My journey starts at an intersection.  I stand in a place where the long and wide roads had sliced into the natural landscape, and where nature fights a losing war for supremacy in the world. Every blade of grass is like a young jarhead sent to the frontline to be cut down, or captured and conditioned to servitude. The road acts like a demilitarized zone and two opposing sides stare across the void.  It’s not a depressing place, but the ambiance is of menace and despair. I stand in relative openness, but before me lies an enclosure of absolute concrete. I remember as a child watching Hollywood movies and seeing where the kids in Hollywood movies lived. Vast expansions of houses and road, some it still in development. The kids in E.T: The Extra Terrestrial lived in cookie cutter neighbourhood I’m sure of it, didn’t magical things happen to them? The Sprawl sits on one side of a relatively quiet street. A supermarket and a row of boutique shops lay opposite. I have no reasonable excuse to walk within this subdivision, there are, at least to my knowledge, no stores, no coffee shops, no parks, no businesses of any sort, no public resource centres, no community centres. There are only houses, and they all look alike. It’s a cold, but bright sunny February morning. I am carrying an unusually heavy bag of promotional flyers that I wanted to deliver to a business park which lay on the other side of the subdivision. The flyers are for a charity walk in aid of The MS Society of Canada, a noble cause. I realise the irony of delivering a charity walk flyer to a business park you can only access via car. Google Maps said this route would take thirty minutes to traverse, with the heavy load, I’m estimating forty minutes. The first paces are relatively normal. The surroundings feel familiar. There are trees that are sparse in this winter frost, but in the summer must create a cooling canopy for the pavement below. The birds are tweeting a morning song in the gardens that are lush from a recent snow thaw. Then the trees and gardens suddenly disperse and I am left facing an unimaginably long stretch of road. The tower blocks of the business park loom above the houses, but they seem extremely distant and even a little unreal. Like some weird architectural illusion, the buildings hang in a sort of steamy haze. Its only when I’m five minutes into walking the long stretch that I understand why the towers look so out of place. A strange heat emerges from the asphalt, the grassless driveways and the white concrete houses. With the winter jacket, the heavy bag, and the long underwear (yes that’s right long underwear, its winter in Canada) I am working up a dreaded sweat, and this is early February, the weather network threw up a high of -6 today. The sweat cools and solidifies on my forehead and cheeks, but underneath my clothes it’s a torrent. I stop and take of my winter coat, remove my woolly hat place it over the bag and continue walking in minus figures in a shirt and t-shirt and no hat. Up until this point I have seen no one, not even a car. Its 9:30am and most of the people who populate this area work on the other side of the city, a forty minute journey at best in heavy traffic. Those people left hours ago, and all at the same time, leaving a car exhaust cloud hovering above their houses that has congealed to form a dangerous and toxic miasma. This is why the distant buildings look like they are hanging behind a smog cloud. But who is left here? The first person I see doesn’t look like they belong in the suburbs. They look like some sort of nineties beatnik, raised on Sonic Youth and Sebadoh, and sent out into the world to find peace, love and tranquilly. The hair is long and shaggy, the jeans torn at the knee, a camouflage jacket that has been in too many hot washes for it to act as useful camouflage hangs loose around the thighs. It’s only when we pass I realise that this is no throwback to a more innocent age, this is a male teenager, a rebellious youth, retaliating against this environment. I have hope for the suburbs. I did the same thing when I grew my hair long and wore loose jeans, and tie-dye Pearl Jam t-shirts on a council estate in England that was more in tune with the Kangol and Kappa sports casual attire of the early nineties. As we pass the youth gives me an awkward teenage expression, a smile rolled in with a grimace, I figure he rarely sees anyone walking this road.

The houses are rowed up like little reflections of each other It’s strange, how would anyone know where they lived in this bizarre optical illusion of a street? Its seems like an obvious question, but I cannot retrieve an obvious answer. But with my brain sweats an answer arrives. Perhaps the architects of suburbs want a populace of contented drones. If a house stuck out for its disparity to the others could it cause contempt for the owners? Could a suburban civil war abrupt over who has the better house. In my heat stroked mind I believe it could, in fact I wish war could break out right now in order for something, anything to smash the monotony of this insanely long street. With war raging in my mind I begin humming Arcade Fire’s ‘The Suburbs’ with its lyric “Your part of town against mine” summing up the mood perfectly. The street seems to converge with another and I at last turn a corner towards another long street, which at least contains some diverse aesthetic qualities in the style of housing. There even appears to be a patch of hilly green space forcing itself upwards, as if trying to infiltrate the concrete from beneath, a wise deception for nature. The greenery offers a relative cooling from the heat and I return my hat to my head, and adjust the strap on my bag to allow the sweat that has accumulated underneath to dry off. There is a bench, I take a seat and drink a bottle of still water, and take stock of my surroundings. The only people I’m aware of are those flying 10,000 feet above me in a airplane destined for warmer climates. No cars have passed me in over thirty minutes, the suburb is dead until the workers return. I wonder for a moment if when everyone arrives home the suburb suddenly becomes a wild and debauched place. The housewives and husbands drink copious amounts of booze and firebomb their neighbours cars. The kids return from school to lead their household pets into a vicious blood sport in this very greenery where I sit and rest. Could it happen? If capitalism fails, the suburbs could become the new Wild West. Frontiers of criminality and unrest. I continue my journey on painful feet. The suburb has an end in sight at last. A return to the bustling highway and then five minutes or so of running by the side of it and I’ll have arrived at my destination, and I can unload this satchel and be free of it. I return via the public transport shuttle that runs through the suburb along the same route I just walked and watch the houses glide by like a reel of 16mm film that shot the same frame over and over again.

What worries me about suburbs is not the people who live in them, though I do worry for them. They, for the most part, have chosen to live within confines that feel comfortable to them, and that is fine, as long as our world can sustain this method of living, which judging by texts such as Suburban Nation and The Walkable City time is running out for this way of life. What concerns me is the isolation they have, perhaps unwillingly, confined themselves within. From an outsider perspective, there is no space for public contemplation or debate. The wrongs of our fragile society seem to not have affected the suburbs, in fact it’s very creation is an act of capital and consumer worship. To live in the suburbs is to allow oneself to become a slave to the corporate machine. To live in this idyllic dreamworld, one must own a vehicle, perhaps two. A commute to work, a drive for the weekly grocery shop, a journey for the kids to the nearest (or most desired) school, a drive to find leisure activities for the family, a drive to a friend’s house. The nature of the suburb is to keep one divided into their own frequency of comfort and of disillusion. In the suburbs one spends time in houses surrounded by neighbours of similar wealth and social standing. One transfers from within the home, where the cable package has been tailored to the occupants, to inside the bubble of a car, where the radio is fixed to a station that relays news and opinions that correspond to the drivers own, and then to the familiarity of a shopping mall, where the high price of food means only the affluent can buy their groceries there. One is in essence totally locked into a undisrupted groove, one that does not allow for the observation or mixing of other social classes or the opportunity to be presentenced with differing political outlooks. When capitalism comes tumbling down it will be residents of the suburbs who will be least prepared for the fallout.