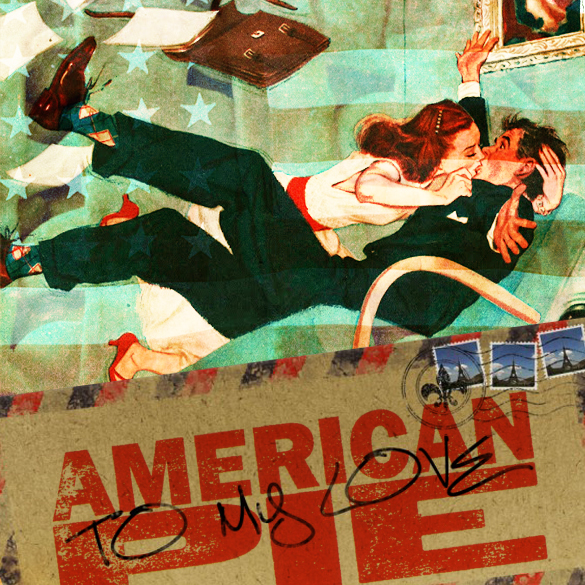 In 1999, the first American Pie movie gave audiences a fresh and honest perspective of teenage high school life. With its fresh-faced cast of young, wholesome, and moderately handsome geeks, it portrayed teenage life in a positivity that was not present in some of the more shoe-gazing high school dramas of the nineties. American Pie offered flawed, yet believable characters, and situations of humiliation and expectance that every kid in America faced. The films premise showed close friends Jim Levenstein, Chris Ostreicher, Kevin Myers and Paul Finch making a pact to lose their virginity on Prom night. Although this might seem puerile to the audience, the groups’ ethics were in fact fairly sound. More sinister teenage films of the era explored the territory of trickery or manipulation of the female sex, as achieved to brutal effect in the Bret Easton Ellis adaptation The
Rules of Attraction (2002). But, in order to achieve their sexual goals, the group actually court the objects of their desire with the full intention of offering as much sexual satisfaction as they can muster to their potential sexual partners, hence the introduction of the Book of Love, a concise sexual encyclopaedia gathered together by former students that informs Kevin on how to perform satisfactory oral sex on his girlfriend Vicky. Compared to other the teen comedies of the previous decade, American Pie seemed almost innocent, with the male leads often being the butt of most of the sexual humiliation jokes. Jim, for example, is perhaps the horniest and most humiliated of the group, his first sexual encounter, which is met with a double premature ejaculation, is broadcasted across the web, whilst in another sticky situation his dad walks in on him humping a warm apple pie. America Pie was an altogether uncommon and refreshing approach that also allowed the female leads investment and control of their sexuality, whilst the males stumbled and tripped pathetically around them. American Pie’s reputation was diminished somewhat by its juvenile sequels, which began to shred the original cast and began to rely heavily on the gross-out humour of the franchise’s most obscene character, lacrosse jock Steve Stiffler. Stiffler hung on the periphery of the group making crude jokes and berating the others in memorable putdowns such as “why don’t you guys locate your dicks, remove the shrink wrap, and fucking use them!”. After the initial three films of the
franchise, American Pie regressed into straight to DVD spin-offs that only featured Jim’s Dad (played by the always excellent Eugene Levy) as a recurring character from the original movies. With the release of American Pie: The Reunion, the franchise came full circle and featured the still fresh-faced original cast, not as hopeful teens, but as disillusioned adults facing the realities of modern adulthood.

One of the interesting aspects of the first American Pie film is how sex, from the male perspective, was portrayed as something special. The loss of virginity to the males is seen as something sacred, and not to be rushed. Only ten years later this characteristic is absent from most films of a similar genre, such as the 2009 Tucker max adaptation I Hope They Serve Beer in Hell for example. Of course, as with real life situations, there are always some childish and humiliating aspects of first-time sexual encounters, but these were played for laughs and share less degradation of females with other films from a similar genre. For example, Jim, seemingly updatable after his internet episode, asks out to prom the only girl who claims did not see the video, Michelle, a nerdy and talkative flutist with the school band. However, Michelle does know about Jim’s online performance and instigates a dominating role in her sexual seduction of Jim, having identified him as a “sure thing”. He is used by Michelle for what we suspect was a very rough and domineering one night stand. The next day Jim wakes in bed alone, Michelle has left, but he has lost his virginity. Whilst both Kevin and Finch do lose their virginity on the night of the prom (Kevin to his girlfriend Vicky and Finch to Stiffler’s mom), it is the character of Chris Ostreicher, who remains a virgin after prom night. Out of the group, Osteicher seems the most obvious to have already lost or to soon lose his virginity. He is a popular lacrosse player, handsome, well built and carries a quiet charm, in theory his jock status would get him any girl he wished. Yet he has emotional depth that is not be associated with his peer group. His courting of Heather, an intelligent and preppy choir-girl, requires him to try to engage romantically and intellectually with her, and the courtship between them is sweet natured (apart from when Stiffler is around making lewd comments). He joins the school choir and although initially he does so because he sees the choir group as an “un-tapped resource” of scoring with girls, by the end of the film, he quits his big lacrosse game in order to take part in a singing competition. Chris and Heather spend prom night together in a romantic tryst, but do not have sex.

Although his original role was that of the popular and rich jock, Steve Stiffler became more of a fixture as the movies progressed. The direct to DVD movies even featured his younger brother and later his cousin in the lead roles (Band Camp and The Naked Mile respectively). With his affluent background and domineering role within the social functions of the school, it seemed like Steve Stiffler was destined for success. In American Pie: The Reunion a sharp suited and clearly still arrogant Stiffler is seen parading through an upscale investment firm, calling the shots like a typical tyrannical boss. However, it turns out Stiffler is just a temporary worker, and is in fact subject to much ridicule from his own cruel boss. This interesting misfortune for Stiffler is relevant to today’s minimal job market in modern America. The increasingly popular intern model of being paid very little (if anything) for apparent on the job education has snared a whole generation, willing to aggressively compete for a prized position within a company. Another member of the original cast that seemed likely to achieve success in adulthood was Paul Finch. Though perhaps the least popular of the group, due to his obvious eccentricities and social awkwardness (leaving the school grounds everyday during lunch breaks to take a bathroom break at home), Finch clearly demonstrates heightened intelligence and a world-weary quality. Therefore, when we are reacquainted with Finchin American Pie: Reunion and learn that he has been travelling the world it initially comes as no surprise. However, later in the film Finch is arrested for stealing a motorcycle. At the reunion party Finch admits that he has not travelled the world at all, and is in fact an Assistant Manager for the stationary franchise Staples, and the motorcycle he stole was his manager’s in retaliation for not giving him a pay rise. The other boys in the group seem to have fared better in their careers than Finch and Stiffler (being mortal enemies after Finch’s sexual encounter with Stiffler’s mom. it is fitting that these two would be the least successful of the group). Chris Ostreicher, now a NFL Sportscaster living in Los Angeles with his promiscuous supermodel girlfriend, is perhaps the most finically successful; though catching his appearance on television makes him recoil, as he begins to realize his celebrity lifestyle is overshadowing his career as sports commentator. When he reconnects with Heather, Ostreicher decides to break with his wild girlfriend and remain in town with Heather, no doubt to reconsider his future. Kevin has become a work from home architect and is happily married, although the feelings he maintains for Vicky remain complex. Jim and Michelle meanwhile struggle to balance their work and family life and sustain the same sexual relationship that forged their union in the first place.

The four main American Pie films provide a convincing trajectory of the journey into adulthood and the complications faced with relationships and work in Modern America. In times of economic downturn, even those we perceive as intelligent, popular, and wealthy (Finch and Stiffler) are faced with lesser options, as companies strive to scrape together profit, in an unprofitable environment. Even the most successful of the group, Chris Ostreicher, has supplemented his career by gaining a Z-list celebrity status, as most young adults wish to achieve in our times of over saturated media outlets. What American Pie: The Reunion really evokes is a longing for youth, and simpler times. Over the past decade, and especially in the post 9/11 era, life for young people in America has become ever more complicated and directionless. Jobs have vanished, relationships have migrated online and do not hold the same currency, education has been singled out for the advantaged, politics has become disengaged, and responsibility has evaporated. The original film saw the seeds of this failure being sown, the reunion is the fruition of this failure.