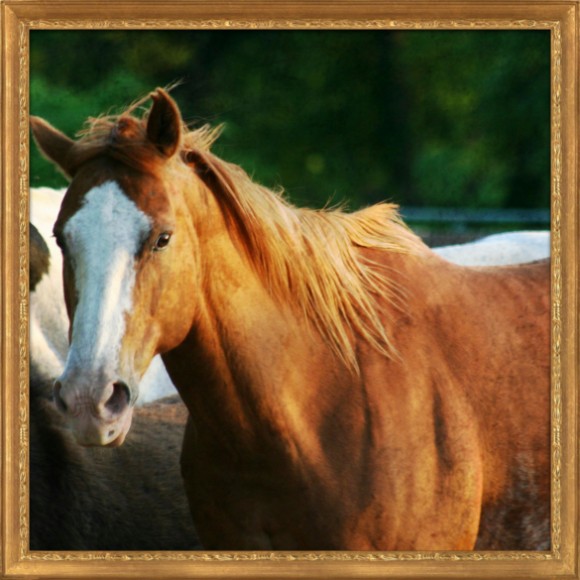 The chief of the Kayapo tribe receives the worst news of his life. A hydroelectric plant will destroy his village. In the civic meeting, he is shirtless. He wears a sacred, red weaving over his heart and a bright yellow fan on his head. He puts his fingers to his brow, a salute to sorrow, lowers his head and cries.

It is too crass to segue to this:

The Republican candidate spent $77,000.00 on the care and feeding of his dancing horse. The candidate gets a nice tax break for that.

What does that have to do with the Kayapo tribe or its chief?

When I get a dancing horse, I’m sure I’ll get the same break, though I once had a clever pink pig who could do any number of tricks, but the guy at H&R Block, who was a neighbor and knew my pig, never suggested I could benefit financially. Plus the pig, as it got bigger, continued to sleep on the heat register, a habit she cultivated from her earliest days (winters in northern Michigan being brutal) blocking the heat to we humans and making the house, from the first floor to the attic, smell like rancid bacon.

In the photo the candidate’s horse has a pretty white blaze down his nose, but his eyes reveal anger. Why is he mad? He is more coddled than 98% of Americans. Perhaps my friend Muhammed has part of the answer when he asks: How much effort goes into training a horse to prance around like an idiot? What does one have to do to a horse to get it to act like that?

So the coddled horse is mad. The primitive chief of the Kayapos is more sad than mad. He was not raised to respond to misfortune with anger.

The candidate’s wife cozies up to the horse. Her blonde hair, flushed, pink cheeks, and the full white sleeves emerging from her vest—she looks like a scout-mother to a cadre of mounted, fascist youth.

My father was a half-Jewish Rumanian, but passed for Mexican. He was one of the last hired men on the pocket ranches crammed up against the foothills of the San Fernando Valley. As the years went by, he became less Jewish and more Mexican and finally split for Sonora, where he married a Mexican woman and had a few kids.

He stole away my base, took my equilibrium. Bukowski claimed that base for a while, but the relationship was short-lived, and when he left my mother, she killed herself. I wondered why she hadn’t killed herself when my father left, never even tried.

Was Bukowski that special, him and his ugly puss and his myth that he was special, above the mass of working men?

My father was a working man. That’s what he was all about. My father was solid, just who he was, nothing more, clean and hard. In Mexico, my father sat on the porch in the evening and carved figures from wood. He never did that in the San Fernando Valley. If he did, he could have taught me. I could have learned to become a wood carver, maybe done that for a living. I could have become a silent man—silence is truth—instead of becoming like Bukowski, full of words, words coming out like water from a sprinkler on a parched L.A. lawn.

My father’s Mexican wife was taciturn, I heard from a friend of his who passed through the Valley briefly. My father was just as taciturn, so they never argued over stupid shit, like most couples do, with all the words tripping them up.

Bukowski argued. He was a big arguer, engaged in a ceaseless argument with the world, with himself, with my mother, but my father knew that there was no point in arguing with the ones you love, or the ones you hate. What were you going to accomplish?

I wish my family was still together, but my parents are both dead, and I’m half dead, like Bukowski was when he was alive, and now Bukowski is totally dead, like everyone else is dead. I wish I had never attended readings of beat poets, wish I’d never met Bukowski, never become a poet, never cemented tragedy and disappointment in words.

I wish I’d never married a woman whose father was an alcoholic, who spent her life feeling sorry for herself. She was a woman who drove men off with her neediness, then spent insomniac nights writing poetry. The only bad poetry is that which rhymes, she told her classes in the junior college, where she was an adjunct. None of hers did.

I wish I hadn’t given my brother my last dollar. I gave him my last dollar to start a restaurant. It was money my wife inherited from her mother. Then my wife died. The money had the smell of death on it, but my brother thought it smelled like corned beef.

My brother was a cook in the Coast Guard who’d gone to Petaluma for his training. On his off hours he used to drive to the French cheese factory, out in the middle of green hills that swelled like breasts. He fell in love with a French cheese maker, but she told him he was a peasant, told him in the thick French accent that he found adorable, even when she was telling him that he was beneath her consideration.

That haughty French maid began his run of bad luck. He was found sleepwalking on the deck of an icebreaker, out of uniform, in his skivvies. When they woke him up and asked him what the fuck he was doing, he told the XO he was looking for ice.

After he was tossed out of the CG, he got a job as an engineer on a kiddie train that ran through a park in Austin, TX. He wore a t-shirt that read, Keep Austin Weird. He liked the train but longed to work in food service. An inner city soup kitchen serving hundreds didn’t cut it. He wanted his own place, so I gave him the double-death money, my mother-in-law’s and my wife’s.

He doesn’t have a menu. He writes the choices on the wall. I thought he knew what he was doing, but he’s lost his food chops. I eat dinner there and feel like strangling myself. Even stray dogs growl at his veal cutlets, one of his “specialties.” They look at me like they want to take a knife and fork and cut off pieces of themselves and eat that instead of anything my brother might serve. My brother’s Tuna Surprise can give an entire village ptomaine.

I’m not responsible for my brother’s life, though I was generous in enabling him, generous and spendthrift, throwing away money as if I could cast off sin, cast off memory and grief.

I’m thinking of computer dating. I’ll find a rich woman in better health than my wife and do my best to impress her. I’ll take her out for a fancy dinner, definitely not in my brother’s joint, even though it has my name: Mitch’s Deluxe Diner. Maybe I’ll take her somewhere Mexican. Before he abandoned us, my father taught me to enjoy Mexican food.

My low cost health care option is vomiting blood and dying. I was Sasquatch—look at me now.

I’m in San Francisco: fog drifts in and gently bumps against bay windows. The smell of roasted coffee from Graffeo’s grinder drifts down the street, inserts itself into the cracks where the windows don’t properly close. I’m sitting in the cove of one of those windows eating mung beans and rice with David, who ate so many carrots he turned orange, and Toni, who stuck so many carrots up her vagina she turned orange, and Liam, who was so bloody English he turned orange and screamed: See Me! Feel Me! Touch Me! Heal Me! out the window ‘til the cops came and took him away for being a danger to himself and others. Weren’t we all?

The mung bean gas rips my guts. I stumble down the stairs as if I’ve been gut-shot by a .44 or poisoned by bad ‘shrooms. I’m smoking French cigarettes, whose blue smoke curls round my skull like a psychedelic concert poster, and migraines me out.

Roberta Flack is singing Killing Me Softly with His Song.

The bus from the race track is coming back across the bridge, and I’m on it, with the stinky old black men on the back seat, having lost all my money. I’m also in the Sinai, sleeping with a Bedouin who never washes with water, only dry sand, and never shows her veiled face, even when her body is naked and twists sensuous under mine.

I’m so nostalgic for the sixties, I wish I would have died there.

Instead I have to cure my bipolar sister. My wife tells me she has faith in me—she knows I can do it. Andrea, my sister-in-law, has another episode. A part of her is as dark as lower Manhattan after a super-storm. I thought she might get better as she aged, that her mood swings would even out, but she’s getting worse. She’s building to xtremes to rival historic xtremes, heavy furniture hauled out to the front lawn to wait for an alien pick-up. Her delusions are so trite they’d be laughable if they weren’t tragic.

God needs to create new forms of madness, just as He needs to create new animals and fresh colors of sky. Hoboken is flooded and forlorn. Andrea’s denial is a bulldozer pushing through floodwaters. She claims to be a recovering alcoholic and celebrates each year of sobriety. It’s the best explanation she can come up with for who she is and the harm she’s done. She continues to do harm. She is a hurricane of harm.

Mitchell Krockmalnik Grabois has had over six hundred of his poems and fictions appear in literary magazines in the U.S. and abroad. He has been nominated several times for the Pushcart Prize. His novel, Two-Headed Dog, based on his work as a clinical psychologist in a state hospital, is available for Kindle and Nook, or as a print edition.