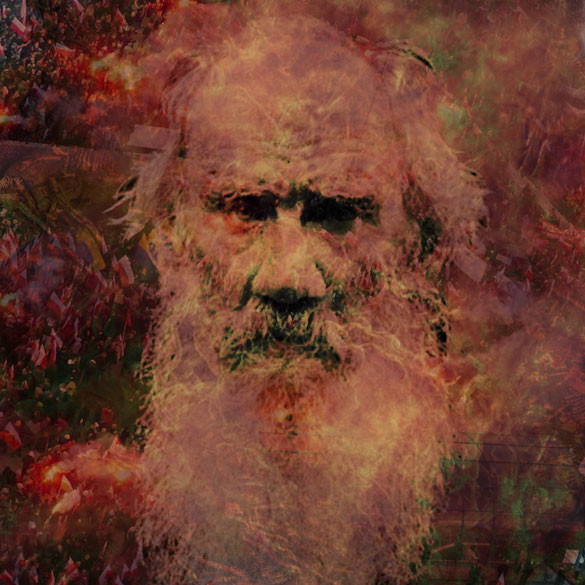 I haven’t read a hard book since high school, where they force fed me books such as The Catcher in the Rye, Flowers for Algernon, and Of Mice and Men.  I had my army of Stephen King books to get me through those tough times, and in college, I swam the rivers of Philosophy and discovered authors such as Dean Koontz, Anne Rice, James Redfield, John Grisham, Tom Clancy, and then later James Patterson, Nick Santora, and Deepak Chopra.  Once college was said and done, I did nothing but write.  Only recently, have I finally begun to march through the three bins of books that have waited years for me to find them, but it was not there that I found him.  It was when the warning signs came crashing down that Borders was going far, far away, and I raced inside to claim whatever I could.  And that’s where I found Leo Tolstoy’s Confession and Other Religious Writing.

It was a hard read, but I finally sank in, ready for that last page.  My mind chewed over his every word, and I had to grin at the possibility of a world not dominated by religion.  But what kind of world would take its place?  That’s a possibility to toy with maybe in my next Science-Fiction piece, but it was toward the end that really got me.  Could we as a civilization live in non-violence?

Do onto others as you would have done onto yourself.  Tolstoy stated that a lot.  I wish it were true.  I was only a child living on Long Island when I first encountered Anti-Semitism.  At a birthday party for a friend, her mother pulled me aside before the cake was even served.  She said that I couldn’t be Alison’s friend because I was a Jew, but what did an eight-year-old know about such things?  All I knew was that my teacher smacked my left hand with a ruler whenever I tried to write with it, and then there was Paul.  But The Same Man has established that story.

Do unto others as you would have done unto yourself.  I’m no saint.  I know that.  I have skeletons in the closet and regrets of moments in time that should never have been.  Karma has kicked my ass so many times, but now she pets me on the head for being a good, little girl.  Too bad, she couldn’t save me from the Road Ragers I still tango with.  Most recently was only a few days ago, where I was leaving work and driving on the Palisades Parkway, heading to Route 6.  The guy in the left lane wanted to merge into the right lane, and before I knew it, our cars were literally side by side with his signal light flashing.  I was ready to defend myself, if he dared push me off the road and into a ditch, but luckily, he realized that the battle was lost.  I’m sorry, but do unto others as you would have done unto yourself can’t apply to a society succumbed to violence or individuals open to psychotic breaks or temper tantrums.

All I digest is violence.  I avoid the news.  Nothing like depressing the hell out of yourself before bed.  If I’m bored, I sit with my father and watch his favorite Bill O’Reilly rant and rave, and sometimes, he makes me laugh.  I would rather watch television shows such as Arrow, Supernatural, Being Human, Continuum, Once Upon A Time, Revenge, Burn Notice, or White Collar.  Okay, okay.  They’re not too violent, but I love movies such as Underworld, Matrix, Bourne, Bond, Wanted, and Shoot ‘Em Up.  Even if you’re not watching people beat the crap out of each other or dodging bullets like in Ultraviolet, you’re still watching movies that have a seed of violence in it like with Reservation Road, Personal Effects, and Shrink, where the violent act of suicide shatters the lives of those left behind and those struggling to pull themselves back from the brink.  We are a society driven by violence.

Recent events have shown that.  The Mayans knew something.  Maybe they knew that the “Crazy Train” was coming, and it’s All Aboard from 2012 and on.  The flood gates have opened, and horror stories that you do not want to know are playing out on the news.  How do we become non-violent when we’re surrounded by violence and violent people?  We can’t offer them a rose when they’re holding a gun, and they’ll find a way to get the gun.  But even if they don’t, we can’t go back to the sixties, where it was peace, love, and happiness, or was it sex, drugs, and Rock ‘n Roll?

I’m a violent person.  I know that.  I don’t cry as much anymore.  Maybe, I’m already numb.  When I deal with these people that can’t drive or just go Road Rager on me, I don’t run away.  I deal with them.  I move up to the car ahead of me, blocking them from cutting me off.  It drives them crazy, and when they realize that I’m not yielding to their manic ways, they go flying off to ruin some other poor person’s life.  And that person may panic.  They may swerve and go off road and into a ditch because the other driver was bent on having their space, but hey, the same matter cannot occupy the same space.  But that’s just me.  That’s how I am, and when I look back at that eight-year-old girl, I see a victim, someone weak that was torn to shreds over and over again.  I’m not her anymore, and I don’t want to do unto others as I would have done unto myself.  I would rather be left alone, but that’s not the way this world works.  That philosophy has come and gone, so see ya later, Tolstoy.  This is the way the world is.

One Response to Living According to Tolstoy