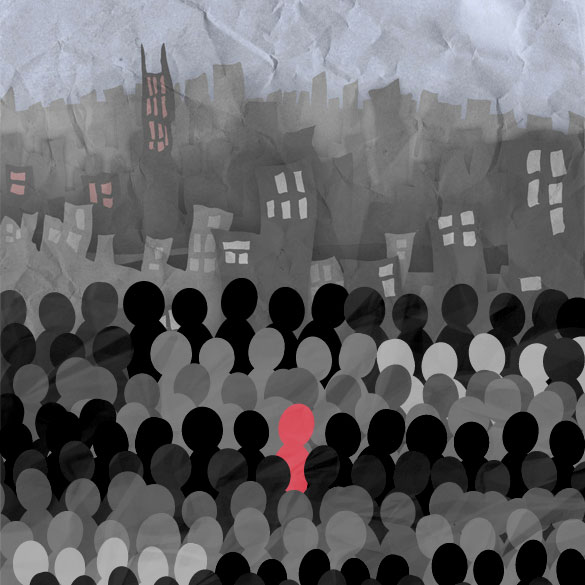 I hardly knew my old friends; nevertheless, when they said they were coming I felt obliged, from the same sense of shame that had defined our relationship years before, to make the nerve-wracking train ride into the city. It was a blazing day without heat. Aside from an increasing concentration of jet contrails as the city neared, only a few scattered clouds, black and the exact size and shape of blimps, interrupted an otherwise empty sky. I spent the ride gazing at scenery flowing past like a smooth-running river, altering in stages from tufts of green to angles of gray. From time to time I pulled out my phone for no particular reason.

Inside the enormous domed terminal, my phone died the instant I tried to call my old friends to let them know I’d arrived safely. That posed a problem. How could I be expected to remember their phone numbers, three sets of ten digits that I’d only looked at once during rambling speeches on their part, with grunts of approval on my part, about their accomplishments since we had last met in the flesh, like reading from resumes? Though I have often wished I were a machine, I am not. Still, ignorant of any other method for contacting my old friends, I resolved to follow a doggedly machine-like plan of action, searching the city in expanding concentric circles and doubling back to the terminal, returning to home base, in a sense, in the hope that they might look for me there. I cleverly concealed my terror, which I thought might provoke an attack, by blending as best I could into the shifting masses of people; that is, I did my best to mimic the air of disgust in their bearing and facial expression, with a hint of wily superiority.

That made me consider the real possibility that should my old friends bear down on me like interceptors, I might not know them. I had hardly ever looked at their faces to begin with, and considering how much time had passed they may have altered into altogether unfamiliar shapes, like bulldozed landscapes. Then again, if they saw me first, they might not know me either. This I considered less likely, as I have always believed that my life, being what it is, has left no impression.

I tried to ask directions to a famous skyscraper, which I knew to have an observation deck for tourists, from a well dressed man standing stock still in a doorway. He did not respond no matter how many times I said “Excuse me!” from three feet away. He may have been daydreaming too intensely to hear me, like a computer frozen by an extended buffering cycle.

It was impossible to see the skyscraper itself, of course, what with masses of intervening skyscrapers rising all around me like crystalline growths of varying heights. But I knew it was close by, so I switched to a grid-pattern search comforted by the inevitability of finding what I wanted. Along the way I passed several men living in the street, awed, as I always have been, by their canny instinct to improvise survival like mountain men, not a little envious of their lives spent lazing in the sun, beholden to no one.

I found the skyscraper with an immense surge of pride, as if my country had just won a war. The line for the observation deck stretched around the block, and I spent long hours listening to the mounting irritation of tourists on tight schedules. Only when I had reached the top did I wonder why I had come. True, I could easily see the entire city sprawled out like a man shot dead, as well as for a good ways beyond to a bluish arc of a horizon, like standing atop a soap bubble, and perhaps even all the way to the train lot back home where a couple of thugs might at that moment be stealing my car—but really, to what purpose? Did I expect to see my friends wandering in search of me down below? Did I expect them to hear me holler? In point of fact, the skyscraper was so tall that human beings teeming on the street were invisible, the way microscopic organisms teeming on one’s skin are invisible.

I overheard a man and woman.

The woman said, “Wouldn’t it be lovely to pitch a tent up here for the night?”

The man said, “I can’t take you anywhere!”

Maybe it was because of the skyscraper’s great height, forming a never-before-experienced angle of incidence in relation to the earth, I can’t be sure, but the sun looked to be plunging for the horizon as though launched from a diving board. I took its rush as my cue, hurrying to the elevators and waiting another long hour to descend to street level, where I floundered for a minute or two in advanced twilight conditions, darkness falling as quickly there as at the bottom of a gorge, the circumstances being virtually identical. Abandoning any hope of finding my old friends, I marched straight for the train terminal, bent forward at the waist and accruing the same unstoppable impetus as if I had become a speeding train myself. Nevertheless, I remembered to glance often behind me and good thing for it. A man followed me also bent forward at the waist and also taking extra long, extra quick strides in a headlong rush, no doubt a criminal who had staked me as an easy target. Sizing him up against myself, I saw that I would make an easy few minute’s work—of beating and robbing that is. People swarmed about, but everyone knows the cruel willful ignorance of city dwellers. No one would interrupt their busy day to stop him. I lengthened my strides and picked up the pace. He matched me, but I am nothing if not motivated by fear. I made it to the terminal well ahead of him, looking back through the glass doors to see him zoom past like a bird of prey that has missed its strike.

“The train’s full,” I was told by the clerk.

“I know. It’s never happened before.”

“They’re full for the night.”

All right, I thought, the city is full of hotels—thousands of them—I’ll just stay the night. Leaving my car in the dark, deserted train lot aggravated, of course, my worry over it. I fully expected it to be gone when I got back. But peace will descend as quickly as choice is lifted away, like the peace one sees in an animal’s eyes when it is caught by a predator after a long chase, when it knows that death is its only option.

I could not find a room. Hotel after hotel was filled to capacity. I took the long shot of enquiring after my friends, but in each case it did not pay off. A woman desk clerk looked at me with either pity or disappointment; I find it impossible to tell the difference. Most, though, assumed the role of defenders of the castle.

“Nope. Nothing doing tonight, but we’ll have plenty of vacancies tomorrow,” I was told by the last clerk. “Half our rooms will be free.”

“Why tomorrow? Why none tonight?”

“No one knows. It just happens that way.”

I found myself alone on the busy street, in that curious conflict of darkness and color on a black night feebly penetrated by millions of light bulbs. Police cars, fire engines and ambulances sped back and forth, sirens howling.