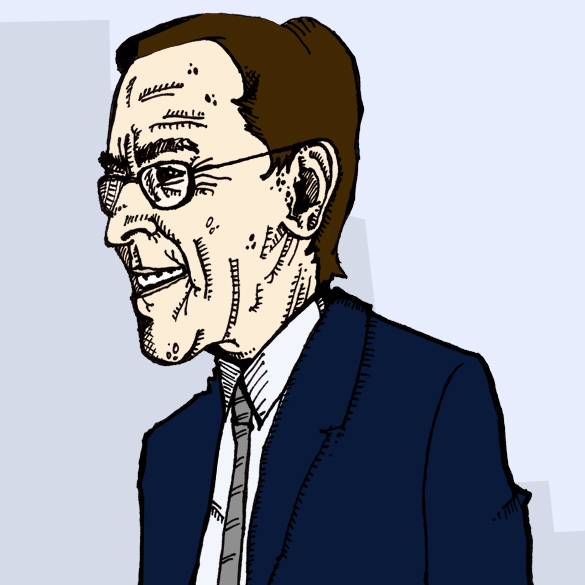 It’s very difficult to have a bad conversation with Bruce Fein. In his answers to my questions about deeply troubling current events, the constitutional lawyer showed why his expertise has been sought by everyone from the government of South Africa to Salon.com to Ronald Reagan. Fortunately for me, he’s good friends with our editor-in-chief, John Whitehead, who played host when Fein came into town from D.C. for a speaking engagement.

The sun beat in through the blinds as the longtime allies chatted across a paper-cluttered desk. I sat down on the third chair, and quietly took out my notebook and voice recorder as they continued to talk. “I went to law school to sue people, not makes friends,” joked Whitehead as he answered his chirping smartphone. “It’s like Machiavelli, rather be feared than loved,” Fein said with a smile. The constitutional attorneys laughed, as I said “umm,” preparing to launch into my first question about the National Defense Authorization Act (NDAA).

Fein is best known for being the assistant attorney general under Reagan, but he has remained in the public eye since, as a commentator advocating the impeachment of Clinton, G.W. Bush and now Obama. His books receive praise from the likes of Ralph Nader, Glenn Greenwald and Ron Paul, and there’s a distinct Paul-like passion to the way he speaks. You can tell immediately that his thoughts are far outside the bounds of everyday conversation, and he doesn’t seem to mind that the rest of us aren’t there with him.

I was seeking his explanation of the ongoing lawsuit brought by former New York Times reporter Chris Hedges against the federal government over the indefinite detention clause in the the Congressional act which authorizes Department of Defense expenditures every year, otherwise known as the NDAA. If the law stands, Obama will have the power to detain any American citizen indefinitely, so long as there is suspicion that they aided either “al-Qaeda, the Taliban, or associated forces.” If that seems unconstitutional to you, that’s because it is—at least according to U.S. District Judge Katherine B. Forrest, who handed down an injunction of the clause earlier this month.

Fein: Why don’t we just briefly describe exactly what transpired in the trial court—the district court at the federal level. Congress passed a statute which President Obama signed that empowered the military to detain without accusation or charge any American citizen that was suspected on the president’s belief alone of providing some kind of assistance to an associated group of al-Qaeda. There’s never a definition of what’s an associated group, or what is material assistance. Indeed, the lawsuit was brought by Chris Hedges and some other journalists who were worried that even interviewing somebody might expose them to such a charge. The presiding judge asked the Justice Department, “Well, what is an associated force? Would you arrest these journalists if they spoke to these people?” And the Department was totally silent, mum. “Well, we can’t say.” Which underscores the vagueness, the chilling effect of the statute. The court held, after a hearing, that the NDAA, with regard to the indefinite detention provisions, was unconstitutional. It violated first amendment rights of free speech and association. It ended in a permanent injunction.

Fein: The way in which a federal system works, if you lose, as the government did at the trial level, you can ask the judge to “stay” the order—not have it go into effect until there’s an opportunity for appeal. That was done in this case, and the trial judge said no, I will not stay my injunction. The Justice Department then immediately went to the US Court of Appeals for the Second Circuit, because this case was brought in Manhattan, and one judge issued a stay of the injunction which will be in effect until late September [the 28th] when there’s a full hearing on whether the statute [the NDAA’s indefinite detention provision] is constitutional or not. Judges are authorized to issue stays of that sort, though it’s not often that a stay is issued in this way, by one judge overruling another. On the other hand, because this is an alleged national security issue, judges get very frightened and timid when the US Government forecasts all sorts of terrible, terrible bloodshed, death and carnage on our sidewalks if the statute is lifted. The judges are then inclined to give the government the benefit of the doubt and put it into a holding pattern until we hear more.

Gadfly: Now, the GOP’s treatment of Ron Paul at the Republican Convention this year…

Fein: His maltreatment, not his treatment.

Gadfly: What do you make of the GOP’s attempt to marginalize Ron Paul and his supporters?

Fein: Well, let me explain briefly to the audience what, in fact, was done. Ron Paul arrived with a substantial number of delegates, and ordinarily he would at least be given a prime slot for speaking. He was confronted with this choice by the Romney Praetorian Guard: he would be given a chance to speak only if he did two things. First, give an unconditional endorsement to Mitt Romney—which would have violated most everything Ron Paul stands for. Second, his remarks would have to be vetted by the Romney Praetorian Guard before he spoke, so it could be denuted of anything that suggested he wasn’t an echo-chamber of Mitt Romney. Mr. Paul said that would be unacceptable and had a separate, organized, informal convention or speaking engagement in Tampa, nonetheless.

Fein: The larger question of what can be inferred from the effort to marginalize Ron Paul at the convention is simply that the GOP is the party of big brother government. They are the party that supports the Patriot Act, the surveillance drones, wars everywhere, and the NDAA that we spoke about. It’s the GOP that supports including Paul Ryan, the TARP money, the bailout of the big banks and of Chrysler. It is not a party of small government, it simply wants to manipulate the organs of the authority of the executive branch in favor of their constituents as opposed to others. If anything it underscored how alike the Republicans are to the Democrats rather than how different they are.

Gadfly: Another group that I saw marginalized recently was the Occupy Wall Street protestors during the one year anniversary of their movement. Do you see any commonalities between the protest movements of the right wing and the left wing?

Fein: The commonalities are: One, both their so-called ideological supporters, the Republican and Democratic parties, totally disavow them. The Occupy Wall Street movement had virtually no voice or optic at the Democratic National Convention because the Democrats are captured by the big, moneyed, corporate interests like Republicans are. I think both movements demonstrate a disenchantment and recognition that the current system is unfair and not viable, but there’s not a coherent remedy for moving forward. Which is why, I think, the Tea Party got co-oped by the Republican Party and entered into the quarters of power, and then, despite the rhetoric, had virtually no influence on what the United States government did, what Congress did. Just like the Occupy movement has had virtually no influence on the Democratic party or the outcome of any election.

Fein: See it’s much easier—and I don’t want to disparage the protestors—but it’s much easier to see a problem and say it’s wrong than it is to fashion a replacement for the status quo that will improve things. Things can always get worse. We see this most apparently in the consequences of the Arab Spring. There is a very large constituency against the status quo, but it doesn’t have an intellectual leader yet.

Gadfly: Well, this is an interview for an arts and culture website. What sources of culture do you turn to to keep you going?

Fein: My answer will probably sound very strange or bizarre. I don’t watch television; I don’t do video games. My entire intellectual life is reading Plutarch’s Lives, reading philosophy, reading history, great men, Pericles, Shakespeare I read regularly. I go back and read the Bible, Francis Bacon, Ecclesiastes. That’s how I spend my time. I could compile a list of great books that people should read. It’s a combination of both fiction and nonfiction. You need to read War and Peace, you need to read The Last of the Mohicans, Pickwick Papers, Macbeth, the Old and New Testaments, the Holy Quran, Thomas Aquinas, Machiavelli, Aristotle, Plato, Socrates and the Trial of Socrates.

Fein: Then, on your own, you have to be very observant about human nature in current events to be able to identify those stream of motivation that enable you to connect the dots and understand what’s happening.

Gadfly: Hearing all that from you, about how great all these authors were from past times… if I’m an aspiring author, why don’t I just give up?

Fein: No! You don’t ever give up. Nothing great has ever been accomplished in the human species without someone being unworried whether your initiative would succeed in your lifetime. Just think, the first person who stood up and said slavery is evil was probably butchered; we have no idea who they are. Even if an initial effort is not met with applause, and it looks like a tiny pebble hitting a huge pond, it’s worth undertaking.  History is so unpredictable that you don’t know if in a century’s time someone else will come back and say, “wow, that really is correct.” The reasons why cultures change are way too complex for one person to understand, but we know it’s possible. With that understanding, you should never live in despair. It doesn’t mean you need to be starry-eyed, and think, “well, a few more supporters and we’ll change the country from one that’s culturally debauched to the new enlightenment.” But you don’t stop. You recognize it’s a huge uphill battle like climbing Mount Everest, but you don’t stop. It’s our nectar ambrosia from the gods.