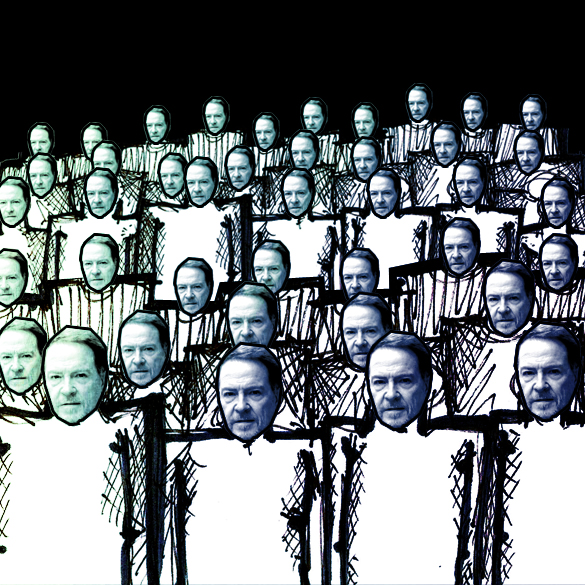 “[P]ublic school reform is now justified in the dehumanizing language of national security, which increasingly legitimates the transformation of schools into adjuncts of the surveillance and police state… students are increasingly subjected to disciplinary apparatuses which limit their capacity for critical thinking, mold them into consumers, test them into submission, strip them of any sense of social responsibility and convince large numbers of poor minority students that they are better off under the jurisdiction of the criminal justice system than by being valued members of the public schools.”—Professor Henry Giroux

For those hoping to better understand how and why we arrived at this dismal point in our nation’s history, where individual freedoms, privacy and human dignity have been sacrificed to the gods of security, expediency and corpocracy, look no farther than America’s public schools.

Once looked to as the starting place for imparting principles of freedom and democracy to future generations, America’s classrooms are becoming little more than breeding grounds for compliant citizens. The moment young people walk into school, they increasingly find themselves under constant surveillance: they are photographed, fingerprinted, scanned, x-rayed, sniffed and snooped on. Between metal detectors at the entrances, drug-sniffing dogs in the hallways and surveillance cameras in the classrooms and elsewhere, many of America’s schools look more like prisons than learning facilities.

Add to this the epidemic of arresting schoolchildren and treating them as if they are dangerous criminals, and you have the makings of a perfect citizenry for our emerging police state—one that can be easily cowed, controlled, and directed. Now comes the latest development in the sad deconstruction of our schools: “smart” identification cards containing Radio Frequency Identification (RFID) tags that allow school officials to track every step students take. So small that they are barely detectable to the human eye, RFID tags produce a radio signal by which the wearer’s precise movements can be constantly monitored.

A pilot program using these RFID cards is being deployed at two schools in San Antonio, Texas’ Northside School District. In the so-called name of school safety, some 4,200 students at Jay High School and Jones Middle School are being required to carry these “smart” ID cards embedded with an RFID tracking chip which will actively broadcast a signal at all times.  Although the schools already boast 290 surveillance cameras, the cards will make it possible for school officials to track students’ whereabouts at all times.

School officials hope to expand the program to the district’s 112 schools, with a student population of 100,000. As always, there’s a money incentive hidden within these programs, in this case, it’s increased state funding for the school system. Although implementation of the system will cost $500,000, school administrators are hoping that if the school district is able to increase attendance by tracking the students’ whereabouts, they will be rewarded with up to $1.7 million from the state government.

High school sophomore Andrea Hernandez, who is actively boycotting the RFID cards, was told that “there will be consequences for refusal to wear an ID card.” Students who refuse to take part in the ID program won’t be able to access essential services like the cafeteria and library, nor will they be able to purchase tickets to extracurricular activities. Hernandez was prevented from voting for Homecoming King and Queen after school officials refused to verify her identity using her old ID card. According to Hernandez, teachers are even requiring students to wear the IDs when they want to use the bathroom.  School officials reportedly offered to quietly remove the tracking chip from Andrea’s card if the sophomore would agree to wear the new ID, stop criticizing the program and publicly support the initiative. Hernandez refused the offer.

This is not the first time that schools have sprung RFID chips on unsuspecting students and their parents. Schools in California and Connecticut have tried similar systems, and Houston, Texas began using RFID chips to track students as early as 2004. With the RFID business booming, a variety of companies, including AIM Truancy Solutions, ID Card Group and DataCard, market and sell RFID trackers to school districts throughout the country, claiming they can increase security and attendance. For example, AIM Truancy Solutions, a Dallas-based company, claims that its tracking system boosts attendance by twelve percent.

RFID tags are not the only surveillance tools being used on America’s young people. Chronically absent middle schoolers in Anaheim, Calif., have been enrolled in a GPS tracking program. As journalist David Rosen explains:

Each school day, the delinquent students get an automated ‘wake-up’ phone call reminding them that they need to get to school on time. In addition, five times a day they are required to enter a code that tracks their locations: as they leave for school, when they arrive at school, at lunchtime, when they leave school and at 8pm. These students are also assigned an adult ‘coach’ who calls them at least three times a week to see how they are doing and help them find effective ways to make sure they get to school.

Some schools in New York, New Jersey, and Missouri are tracking obese and overweight students with wristwatches that record their heart rate, movement and sleeping habits. Schools in San Antonio have chips in their lunch food trays, which allow administrators to track the eating habits of students. Schools in Michigan’s second largest school district broadcast student activity caught by CCTV cameras on the walls of the hallways in real time to let students know they’re being watched.

Some school districts have even gone so far as to electronically track students without notifying their parents. In 2010, it was revealed that a Pennsylvania school district had given students laptops installed with software that allowed school administrators to track their behavior at home. This revelation led to the threat of a class-action lawsuit, which resulted in the school district settling with irate students and parents for $600,000. Similarly, in 2003, a Tennessee middle school placed cameras in the school’s locker rooms, capturing images of children changing before basketball practice. Thankfully, the US Sixth Circuit Court of Appeals struck down the practice in 2008, ruling that students have an expectation of privacy in locker rooms.

Clearly, there’s something more sinister afoot than merely tracking which students are using the bathroom and which are on lunch break. Concerned parent Judy Messer understands what’s at stake. “We do not want our children to be conditioned that tracking is normal or even acceptable or mandatory,” she shared.

“Conditioned” is the key word, of course. As Richard Hackman and Greg Oldham recognized in their book, Work Redesign, laboratory animals, children, and institutionalized adults “are necessarily dependent on powerful others for many of the things they most want and need, and their behavior usually can be shaped with relative ease.” Taking those ideas one step further, psychologist Bruce Levine noted, “Behaviorism and consumerism, two ideologies which achieved tremendous power in the twentieth century, are cut from the same cloth. The shopper, the student, the worker, and the voter are all seen by consumerism and behaviorism the same way: passive, conditionable objects.”

To return to what I was saying about schools being breeding grounds for compliant citizens, if Americans have come to view freedom as expedient and expendable, it is only because that’s what they’ve been taught in the schools, by government leaders and by the corporations who run the show.

More and more Americans are finding themselves institutionalized from cradle to grave, from government-run daycares and public schools to nursing homes. In between, they are fed a constant, mind-numbing diet of pablum consisting of entertainment news, mediocre leadership, and technological gadgetry, which keeps them sated and distracted and unwilling to challenge the status quo. All the while, in the name of the greater good and in exchange for the phantom promise of security, the government strips away our rights one by one—monitoring our conversations, chilling our expression, searching our bodies and our possessions, doing away with our due process rights, reversing the burden of proof and rendering us suspects in a surveillance state.

Whether or not the powers-that-be, by their actions, are consciously attempting to create a compliant citizenry, the result is the same nevertheless for young and old alike.