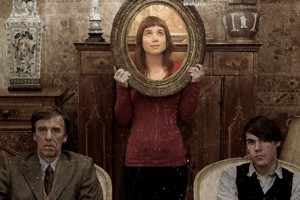 In Artifacts of Idealism, director Sean Corbett paints a picture of idealized, obsessive love against the backdrop of Montreal’s Occupy movement. Simon Pelletier gets to show off his acting chops as the young Private Eye Charles who is recruited for a peculiar task by Robert, an eccentric older gentleman played by Nesvadba. Robert has fallen in love with an image of a young woman (Marshall) he saw at an art gallery and becomes determined to track her down, wondering if she is as perfect as her aesthetics suggest. Charles eventually meets the real life Marilee (after a particularly humorous run-in with the Quebecoise owner of the art gallery who tries to introduce him to “pleasures of life”), whom he finds even more enigmatic than her portrait. READ MORE.