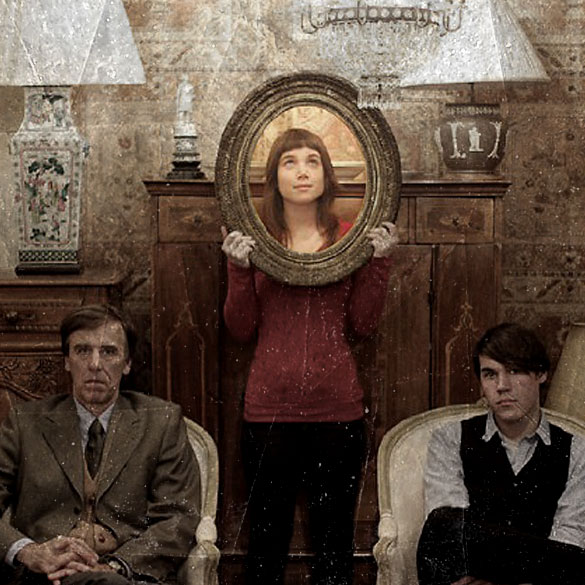 In Artifacts of Idealism, director Sean Corbett paints a picture of idealized, obsessive love against the backdrop of Montreal’s Occupy movement. Simon Pelletier gets to show off his acting chops as the young Private Eye Charles who is recruited for a peculiar task by Robert, an eccentric older gentleman played by Nesvadba. Robert has fallen in love with an image of a young woman (Marshall) he saw at an art gallery and becomes determined to track her down, wondering if she is as perfect as her aesthetics suggest. Charles eventually meets the real life Marilee (after a particularly humorous run-in with the Quebecoise owner of the art gallery who tries to introduce him to “pleasures of life”), whom he finds even more enigmatic than her portrait. Charles follows her for several weeks, and, like his employer, he soon becomes enthralled with Marilee: thanks to the work of a smooth talking friend, Marilee becomes his new roommate. Before long, however, he begins to wonder if his initial adulation may have been too lofty.

Corbett takes a small budget a long way. The dialogue can be tricky at times due to the fact that it was improvised, but some actors—especially Lee Marshall as the scattered Marilee—shine in this scenario. The supporting cast in particular is outstanding in the film. Oliver Koomsatira as a playboy-in-training and Delphine DiTecco as Charles’s put-together, uninspiring girlfriend (who is cast aside when he meets Marilee) add some much-needed humor to the often heavy picture.

Where the film most excels, however, is in Sean Corbett’s masterfully assembled montages. Charles tails Marilee to a bebop soundtrack, and the jazz serves as an excellent throwback to the PI movies of the 1930s and 40s while perfectly capturing Charles’s upbeat franticness as a twenty-something in love. The much slower beginning and closing montages set to Maria Callas’s “Casta Diva” (“Pure Goddess” in English) are incredibly intriguing and give the viewer very much to contemplate. In comparison to the often static, two to three camera dialogue of the rest of the movie, the montages are a beautiful change of pace.

While Artifacts of Idealism could exist simply as an independent art film, Corbett also weaves a subtle political message into the story. In the finest segment of dialogue in the entire film, Charles quips he has a difficult time blending in with the social science students because his “sense of purpose and lack of entitlement was disconcerting to them.” He quickly follows that statement by asking, “Are we making progress,” a thinly veiled jab at the seemingly aimless and haphazard progressive economic political movements which took cities by storm during the height of Occupy Wall Street. (Charles’s political leanings are alluded to when he shows off a t-shirt featuring the well-known, if not controversial, libertarian economist Hans-Hermann Hoppe—Who would have guessed there was merchandising?) A cacophonous meeting of “Big Government” political activists even punctuates the final scene of disillusionment in the movie; the scene contrasts heavily with the film’s sweeping operatic finish.

Mostly, though, Artifacts of Idealism is a film about idealized love. In their desperation to find pure beauty in what they view as an increasingly self-absorbed and banal society, Charles and Robert unfairly objectify Marilee, at several points even referring to her as an object. Their quest for perfection proves to be just as quixotic as the vain attempts of the protestors they scoff at. In the end, maybe it’s necessary to refine the definition of perfection—or at least what it means to be flawed.