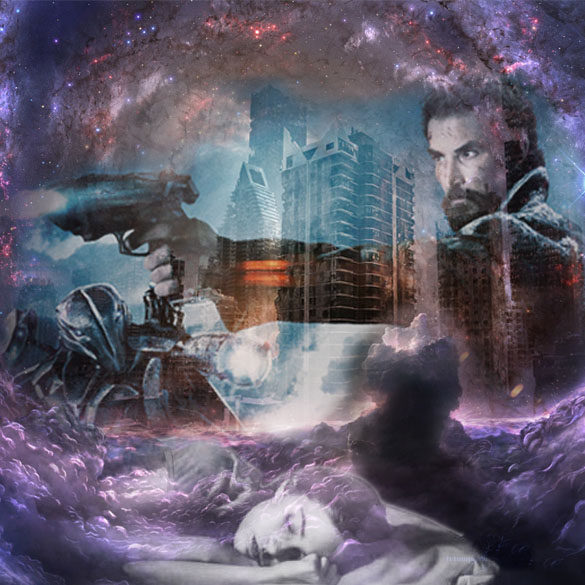 We never see when this world ends. We just dream about it. We dream of invasion, extinction, and oblivion. We fear to be the next Mayans or Aztecs with a great civilization lost, and all its people gone without a trace. Will it be Pestilence to ride her black horse across this land, bringing us down to the knees of Death? Man’s latest best friend, promising technology is the gift of future but a future that it will take, and we will be left struggling to hide from termination. No, we will never see when this world ends, but we do dream about it. We hope, we fear, and we pray. We pray that the day never comes, but in the darkest corners of our mind, we know that it will, which begs the question. Will we survive?

“We were here. This world was torn and twisted, and no more could it stand. And Death ran its black horse across our streets, and the sun disappeared from sight. And our end was fast approaching, but we never gave up. We stood together, no difference, and we waited. And then we were gone, but we were still here.” These words haunt the footsteps of Essence, my Science-Fiction short story published by Bartleby Snopes Literary Magazine. We were here at the end of this world, hoping to live beyond our darkest fears, but even when life is a dying star drifting softly into the abyss, life waits to start again. Pieces of history are left to be found, and imagination is key to unlocking the past. And we were gone, but we are still here. We don’t begin with a breath of life. We begin with hands that changed the world, structures forever sound, and portraits never to fade. Our dreams are papers in the wind, and our essence is the water left to water broken ground. We will never die, but die we shall to start all over again.

“I wanted to wake up. Instead, I was a dead man walking. I could have run, but more men appeared, ready to overpower me. I didn’t have a choice, and my strings were cut. The chamber rose into view. This was it. Time to die. This was the world that I dreamt, and as my foot took its last step, my last breath, I finally woke up.” I never wanted to see the end of this world. I never wanted to dream of it. It ties my stomach in knots when watching movies such as Knowing and 2012, and I know that I would play the fool to believe that this world will never end. I try not to think on it, but I dream about it. I dream the story, When The Dust Settles, also published by Bartleby Snopes Literary Magazine.

How will it end? I love Ray Bradbury’s Zero Hour. It was simply child’s play. We were so innocent, letting imagination lead the way, but did we ever question where it would lead? What seemed like a game became more of a plot, a mission to conquer, and we were its puppets led upon a string. Then, chilling realization dawns upon us, and it is no longer a new day but the last one to ever know and fear. “I see you,” haunting words, the last words when the enemy comes home, but is this how it will end? Or will the end be more swifter, merciful? Do we dare know, or do we beg not to?

The skies are falling. Time ran out, and the world shattered. Lives are gone. Innocence is erased, and the rain are tears of pain and loss not laughter or joy. We’re on the run, and if found, we would surely die. Or we would become enslaved with no hope of ever knowing freedom again, but do we surrender? Do we accept defeat, or do we fight? How can we fight an impossible foe, but such a thought would be our undoing. And our struggle, the slimmest chance of hope will fade to black, leaving us forever in darkness.

No matter our end or when that day comes, we cannot end. We cannot be cowards to run away and hope to live another day. We must not be willing to roll over and die. This is our world. This is our life. We may have lost touch with ourselves, but we will always be human. What lies in humanity is the heart of strength, love, and with love comes faith. No matter the darkest hour that we will face, somehow, someway, you’ll make it through, but instead of just trying to survive, you fight. You fight for a world gone. You fight to take back a life ripped away. You fight for love. You fight for family. You fight for humanity. You fight like the resistance fighters of Spielberg’s Falling Skies. This is your world. This is your life. This is who you are. For now, we hope to never see that day come, but we dream. We dream of that last hour when the sun sets upon forever, and a new day will not meet us tomorrow. Tomorrow will rest in the hands of the unknown waiting to be written by those left, those willing to start again, and we will begin.