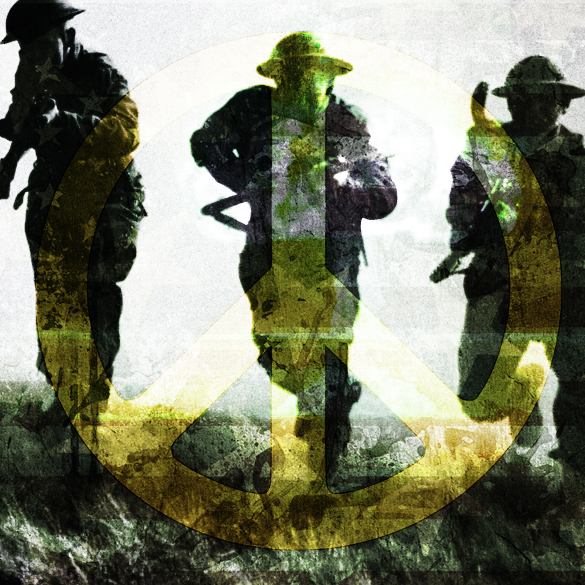 Book Review: War No More: The Case for Abolition, by David Swanson (2013).

“In addition to being immersed in a false world view of war’s inevitability, people in the United States are up against corrupt elections, complicit media, shoddy education, slick propaganda, insidious entertainment, and a gargantuan permanent war machine falsely presented as a necessary economic program that cannot be dismantled. But none of this is unalterable. We’re dealing here with forces that make war more likely in our time and place, not insurmountable obstacles that guarantee war forevermore. No one believes the military industrial complex has always been with us . . . It didn’t always exist. It expands and contracts. It lasts as long as we allow it to. The military industrial complex is, in short, optional, just as the chattel slavery complex was optional.” (63-64) 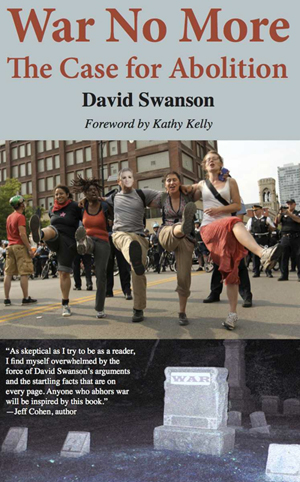 Each generation has to come to its own understanding about war and the tragic loss of life which accompanies it. Today this book ardently addresses wars in Iraq, Afghanistan, Libya, Syria and elsewhere in the headlines. Previously, the Great War (World War I) left 21 million men wounded and more than 8.5 million soldiers dead on all fronts, together with at least 12 million civilian deaths. Conscientious objectors to this madness were brutalized and imprisoned in Britain and the United States. Fast forwarding to the Vietnam War, now a generation ago, it was the last war in America with a forced draft. Then the road to a conscientious objection to Vietnam was somewhat less hazardous with many being able to flee to the safe haven of Canada. But Muhammad Ali did not flee and he was ordered imprisoned for his objection to Vietnam until the Supreme Court freed him.

Be it Eugene Debs campaigning to eliminate war from his prison cell almost 100 years ago, Muhammad Ali, or David Swanson today with his many Peace efforts, they all had to educate themselves at some point on the moral, philosophical, religious, humanitarian and practical facts supporting an emerging conscience which was telling them that war must stop and that there must be alternatives to it. Because there is no military draft at present, few citizens have to face the direct issues surrounding war since they are not forced to kill by being made into a soldier. But when conscience does call and the moral perplexity which is war surfaces, David Swanson in this short book provides an education and many talking points on the question.

While his fervor for the subject of eliminating all war is sweeping and to some might be considered naive, this writer has thought extensively about his subject. For example, he effectively identifies many of the hidden causes for war making by the United States, such as the desire for land and conquest in the Spanish-American War of 1898, which resulted in the acquisition of the Philippines. More recently he identifies factors such as “fossil fuel pipelines, the positioning of weaponry, political posturing, geo-political posturing, maneuvering toward an invasion of Iraq … patriotic cover for power grabs and unpopular policies at home, and profiteering from war and its expected spoils.” (35) Additionally, other statistics he compiles on the results of war historically are quite compelling. For example, here we find the casualties, civilian and military, deaths and wounded or diseased, for each war by the United States throughout its history. (116-24) Even more persuasive is another graph indicating the total percentage of the population killed in a particular war, such as 14% in Korea, 9% in Vietnam or 23% in the Philippines after the U.S. conquest there. (134) Another table chronicles in today’s dollars the costs of American wars ranging from $9 billion for the Spanish-American War, $80 billion for the Civil War, $334 billion for World War I, $738 billion for Vietnam, $600 billion for Afghanistan and $810 billion for Iraq. World War II was $4.1 trillion. (135)

To those who might contend that wars are dying out and that mankind is becoming less violent, Mr. Swanson carefully argues that this misplaced claim ignores the following factors.

“U.S. media outlets routinely discuss ‘the next war’ as if there simply must be one. Missing is the development of NATO into a global aggressive force. Missing is the danger created by the proliferation of nuclear technology. Missing is the trend toward greater corruption of elections and governance, and the growing – not shrinking – profits of the military industrial complex. Missing is the expansion of U.S. bases and troops into more nations as well as U.S. provocations toward China, North Korea, Russia, and Iran; increases in military spending by China and many other nations; and misconceptions about past wars including the recent war in Libya and proposals for wider war in Syria.” (137-38)

As another unnecessary cause of war, he also argues that the United States government “has been misidentifying new Hitlers for three-quarters of a century.” (44) Here the author believes and contends that much has changed since the end of World War II and a new Hitler is not even possible today.

“There has been no World War III. Wealthy armed nations of the world have not gone to war with each other again. Wars are fought among poor nations, with poor nations as proxies, or by wealthy nations against poor ones. Empires of the old variety have gone out of fashion, replaced by the new U.S. variation (military troops in 175 countries, but no colonies established). Small-time dictators may be very unpleasant, but none of them are planning world conquest…. The people of Eastern Europe who nonviolently got rid of the Soviet Union and their communist rulers will never be traded away to a new Hitler, and never will any other nation’s populations. The power of nonviolent resistance has become too well known.” (45)

Here this reviewer suggests that Mr. Swanson omits the beginning of the Cold War at the end of World War II and the Soviet terror which was Joseph Stalin, surely another Hitler. This danger resulted in the containment policy of President Harry Truman which prevented Greece from falling to the Soviets and which lead to the Marshall Plan which restored Western Europe economically and politically. And what about the morality or necessity of military force once South Korea was invaded by the North at the behest of Stalin? It was believed that further appeasement in Korea would lead to World War III since appeasement of Hitler was thought to have been a cause of World War II. But this writer’s sole references to Korea are first to call it a Pentagon offensive war and second to claim that it “accomplish[ed] exactly nothing.” (159) However, this “offensive war” claim is historically inaccurate since the North invaded the South in a drive to the Sea until the United Nations defensively intervened. The success of South Korea today, which still lives in economic and political freedom while the North starves, also belies the nothing accomplished assertion. And, some 60 years later, North Korea still remains a nuclear armed menace. These are issues which cannot be ignored when arguing that war should never again be an instrument of state policy.

On the other hand, the author effectively makes the point that many wars can be avoided through sincere negotiations, and credits President Dwight Eisenhower for avoiding war over the U-2 incident when that spy plane was shot down over Soviet airspace. We all can remember that Eisenhower is a good example of how a strong President without macho or inferiority issues can stand up to the military-industrial complex which sought several wars during his Presidency, which he avoided, including an atomic war with Communist China.

Mr. Swanson’s version of a misplaced United States participation in World War II against Nazism and Japanese Imperialism, or his claim that the Soviets “primarily defeated” Hitler, with others “playing relatively minor parts” (109), or that the use of the atomic bomb on Japan “was in no way justified” (114), also can be critiqued. For example, American casualties in the world war up to the anticipated invasion of Japan already exceeded one million. One expectation was that another million soldiers, sailors and airmen would die or be maimed in an invasion. Most of the cities of Japan had already been firebombed and destroyed, including Tokyo, at great loss of life in the hundreds of thousands, but still the Japanese refused to surrender. Kamikaze pilots, like present day suicide bombers, were suicidally crashing their planes into American naval ships at a great loss of vessels and men. Japan also had prepared its citizens for hand to hand combat to the death by women, children and the elderly in defense of their homeland. In light of such facts, President Harry Truman’s decision to use the atomic bomb to hopefully force the Japanese Emperor to intervene and surrender is certainly a defensible one and is not as clearly wrong as the author suggests. But the important point made here in this book is that in the opinion of the author these historical circumstances will not repeat themselves and total war can be eliminated; for the world has changed too much in the succeeding years. For example, nonviolent resistance is now a widely known tactic to resist a military invasion. This argument is a defensible one.

All in all, War No More is a valuable contribution to the body of anti-war literature.

Since he holds a master’s degree in philosophy, perhaps Swanson finds himself in the tradition of Bertrand Russell, the renowned philosopher, mathematician, British Earl and eventual prisoner of conscience, who eloquently argued in the Great War era that war serves no great human purpose for either side. David Swanson agrees for all the reasons well stated in this work.