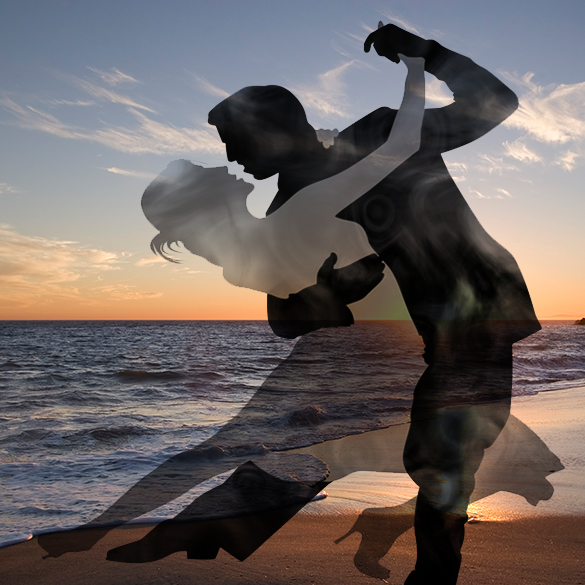 to the surf-puddled sand were mirror

images of a pair lithely waltzing

in a dimly lit window beyond

the boardwalk reminding me

of what an old woman once said

in a dark smoky lounge:

“Your dad was a hell of a dancer,

God rest his soul and his feet.

Too sad this jukebox is dead,”

she added, returning to the bar,

a youthful spring in her gait,

that was mine as I approached

that beach mansion door after

Nudging open the door as if I’d lived

all my days there I strolled

to the ballroom where kindly moonlight

On hands and knees I read dance names

As I stumbled off every lesson trail

as if studying with Arthur and Fred,

I thought of that old lounge woman.

I pictured my father flat in the ground.

How happy I’d been

that jukebox was on the blink

of my old man’s legacy.

At four in the morning I staggered out.

The seashore lovers were gone.

Kicking off my shoes I rested

in the refreshing pools late

of romantic dips and whirls.

I moved this way and that

as if a little kid playing

in his father’s learned shoes.

On the wall at the rounded

end of the horseshoe bar

an oil painting of thoroughbreds

Whirlaway and Seabiscuit for example

Golden Arrow and a host of lowly

sorts allergic to the winner’s circle.

Some swore there were several

to sell shots to match the double

takes but no patron driven

off the deep end by that scheme

a maniac amok in a ritzy museum.

When a gent waltzed a dame

from the back room dance floor

to an art-side seat, conversation

was not likely to commence

Lounge odds were set at one

to nine the opening words would be

“OK, sweetheart, which nag you

figure got under the wire first?”

had a security gig nights.

He lived in the Federal Housing

with a woman named Mae

who had eight kids.

with the crew was their bedroom

that was padlocked twice.

Eddie and Mae had 2 more tots.

If you love babies, he said,

you gotta love shit and piss.

The oldest boy was the best

dancer in the Project.

was his feature number.

Eddie got yet another

The dancer gave out free passes

and I took my date to a matinee:

THE BALLAD OF CABLE HOGUE

Some critics say it’s the best western ever.

The theatre was empty except for Mae

snoring in the back row.

on the floor near an aisle light.

My date thought the film was boring,

fell asleep on my shoulder.

The kids filled their diapers.

The smell ran through the theatre

McDade is a former computer programmer living in Monroe, CT with his wife, no kids, no pets. A graduate of Fairfield University, he served two hitches in the U.S. Navy.  McDade’s poetry has most recently appeared in Retail Woes.