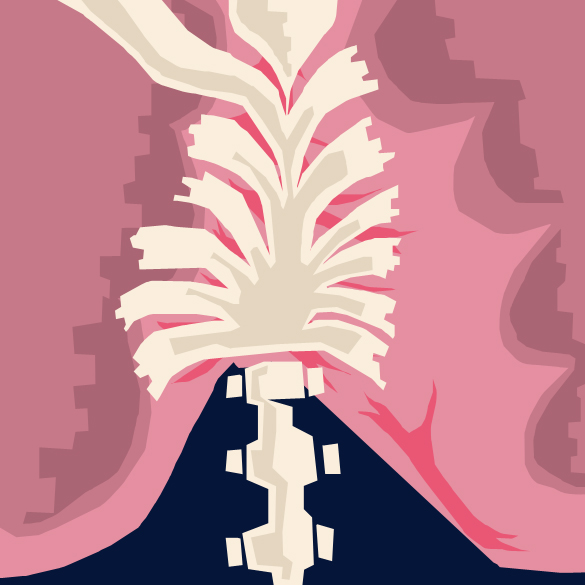 It can smell the fear in the gush of your fresh spilt blood; but it will wait. Until you are weary and too weak to fight it off. And then it will take you.

Drag you down into its lair, a bone-lined earthen den, carpeted with the pelts of dead children. It will eat adults sometimes, but only if it has to; it finds them too tough. It prefers the sweet marrow of younglings. To eat their rosy-sweet flesh, and suck on fresh cracked bones, delighting in the still-living victim’s screams.

It does not care about their pain. Not because it is a sadist, it merely has no concept of mercy. No notion of fear. Because it is at the top of the food chain, and you are its favourite dish. No human-wrought weapon can kill it, no ritual can ward it off for long. It is immortal and it can be anywhere and everywhere. And it is so very hungry.

Ancient tales warn of this thing, of dallying in the darkness, in in-between places; places that it likes best. Like the space under your bed, or in the small gap between the bookcase and the wall.

Some people think it lonely, think it’s looking for something. That it used to be a man, and it’s searching for its children. That would explain why sometimes, just sometimes, it will release a child it has snatched. They will be hearty and hale, though covered in reeking gore, intact save for a single rib.

The adults think it’s the work of some sick pervert, a paedophile with a death fetish. The children know better, but then they would, wouldn’t they? They say it chains them to a rocky outcrop in its lair, peeling back their skin with the swipe of a filthy nail. With all the skill and brutal delicacy of an experienced butcher. Tiring of their screams, it would stuff dirty rags into their mouths. And it would reach into their chest and yank out a rib, snapping it like a wishbone.

It would burn them with strange-smelling ointments and stitch them up. Dumping them back where it had found them. Most of the children blacked out from the agony, but a few, used to pain from bullying or abuse would watch as the Thing would dip the bone in rotting meat slurry. Observing silently, numbly, as it performed another strange procedure.

These children said it was growing more children; children of its own.

They said the Thing was Adam, still lurking about after being evicted from Eden, unable to die. They said these children were part of an army, designed to challenge God and the Devil. A third option, come the end of the world.

They called this foul brood the Rib Children, and say they’re monsters. Creatures that lure away children, bringing them to Daddy’s lair. And that the army’s numbers swelled daily. The Thing is, after all, a fast worker.

So, do me a favour tonight, and keep an eye on your children, won’t you?