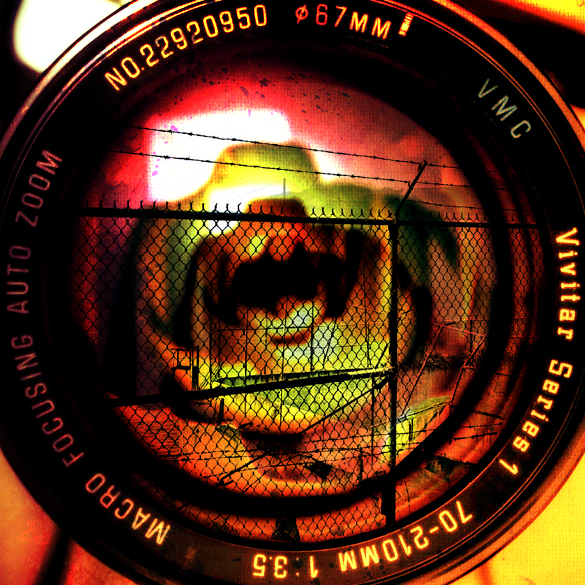 We have grown accustomed to documenting the world around us through a multitude of lenses. From birthdays, to marriages, to pet antics and cuisine masterpieces. We have taken to recording almost every aspect of our daily lives. It would seem that nothing is safe from the ubiquitous camera lens. The winner of the World Cinema Directing Award at the 2012 Sundance Film Festival, 5 Broken Cameras explores what happens when an initial desire to film family moments turns into something more for Emad Burnat, a villager in the small farming town of Bil’in in the West Bank.

Directed by Burnat and Guy Davidi, 5 Broken Cameras spans the course of five years as seen through five cameras, each of which is eventually smashed, shot, or otherwise broken. The story begins in 2005 when Burnat, who films the documentary, purchases his first camera in order to record the childhood of his fourth and youngest son, Gibreel. However, Burnat finds his focus widening to the lives of his family and neighbors, as they protest the appearance of nearby Israeli settlements that increasingly encroach on their farmland. From behind the camera, Burnat explains and watches as the villagers of Bil’in (his home) initiate a series of nonviolent protests against the Israeli soldiers who patrol a barrier built between Bil’in and the settlements. The protest movement, which begins with weekly marches near the barrier, quickly escalates into full-fledged skirmishes—rocks, teargas, and blood included.

As I expected from a narrative concerning the conflict in the West Bank, the documentary is violent, politically charged, and intense. Being a citizen of the United States (and one who could use a brush up on political and global phenomenon), my impression of the Israel/Palestine conflict has been limited to ten second news clips, statistic-heavy newspaper articles, and images of a faraway conflict between faraway peoples. Hence, what saves 5 Broken Cameras from being another detached glimpse of distant political strife, is the film’s ability to infuse a bit of humanity into the Bil’in conflict.

In 5 Broken Cameras, the villagers of Bil’in are presented in context: Burnat films his neighbors at home, at community celebrations, hanging out with friends. Burnat’s home footage makes the villagers of Bil’in more relatable than the one-dimensional protestors often seen on the evening news. Burnat follows two prominent figures in the protests who are also his close friends. Burnat introduces his first friend with a candid shot, in which his friend is hugging a large tree—Burnat subtly implies that this friend enjoys attention. Burnat shows his second friend mobbed by small children, flying a kite. He is hopeful, innocent, happy, Burnat explains. Through these human details, Burnat shows the villagers of Bil’in as individuals first and protestors second.

Footage of Burnat’s son Gibreel, whose narrative intertwines throughout the movie, also gives Burnat’s film a more intimate, home-movie feeling. Watching Gibreel’s life coincide with the conflict in his village, and how he interprets this environment, invokes generational questions: how will this upbringing affect Gibreel’s outlook as an adult? Will he be more inclined to use protests to resolve conflict, or less? Will being able to visually look back on this documentary, his father’s home footage, impact his generation in ways that previous generations have not had the chance to experience?

Burnat’s constant presence is also a strong, cohesive aspect of the film. Rarely appearing onscreen (he often mentions that he feels safer behind the camera), Burnat makes his presence known through his honest and reflective narration, which runs for the duration of the film. Burnat’s subtle presence creates the sensation of watching Burnat’s private diary, in video form; his passion and sincere belief in the purpose of his film are clearly evident. In a sense, 5 Broken Cameras comes across as an artistic, cumulative, and cathartic response to the conflict in Bil’in.

While I greatly respect Burnat and Davidi for creating this documentary, I could not wholeheartedly accept the ethos of the film. While I chuckled when Gibreel and his ridiculously large brown eyes first appeared on the screen, there were other scenes that caused me to freeze and question the motives of the filmmakers. In one scene, Gibreel has just returned home from attending his first protest at the barrier with his father. He is probably around four years old. Absently scratching his skin and occasionally coughing from the teargas thrown at the protesters (a typical occurrence), Gibreel describes the protest to his mother in his toddlerish language. Standing by the sink, his mother smiles knowingly, as if hearing about his first day of school. In another scene, Burnat is filming his kite-flying friend at a protest. There is the crack of a gunshot, a strangled yell, and his friend is dead. It is all captured on camera.

Arguably, the purpose of a documentary is to literally document. It holds no responsibility for what happens onscreen or the actions of its characters. However, I personally feel like this argument does not hold up with regards to 5 Broken Cameras. I experienced profound discomfort in comparing the worldviews of those in Bil’in to that of my friends or myself. I grappled to understand why Burnat would keep such jarring images in his film—what motivates someone to keep the death of one of his closest friends in a widely viewed documentary? Although Burnat is under no obligation to depict the other side of the conflict, should it also be so carefully ignored? I found these unsettling questions strongly chafed with the trust I had in Burnat and the villagers of Bil’in, which Burnat had fostered through his sincere narrative and empathetic characters throughout the rest of the film.

The documentary, which so strongly tugs on sympathy, comes across as an emotional argument rather than an unbiased documentary—a dichotomy that I felt held the film down. Again, I have never been in the shoes of the people of Bil’in—I watched 5 Broken Cameras from a cushioned seat in the auditorium of a new academic building at my university. However, the aspects of 5 Broken Cameras that made me the most uncomfortable were not the details of the political dispute itself, but the questions it raised about how the human nature copes in situations such as Bil’in.

However, Burnat likely did not create 5 Broken Cameras in order to hear my personal views on life. What is important about 5 Broken Cameras is that it reminds us that the violence and conflict in the West Bank is real. The people of Bil’in, Burnat’s friends, Gibreel, are more than newspaper references. 5 Broken Cameras is a genuine glimpse into another life and culture—perhaps a lens that we need to peer through more often here in the United States.