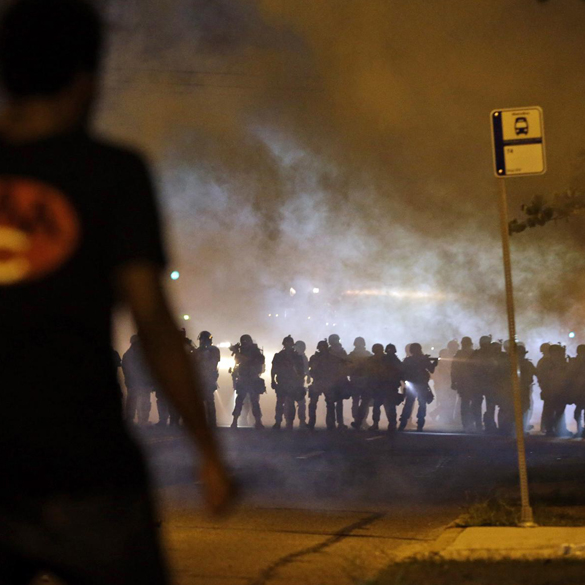 “I thought I was losing my capacity to be shocked — but events in Missouri over just the last couple of hours have crossed a frightening line, one that makes me pray that this assault on fundamental American values is just the aberration of one rudderless Heartland community, and not the first symptoms of nation gone mad with high-tech weaponry to keep its own citizens in line.”—Journalist Will Bunch

The difference between what happened in Boston in the wake of the Boston Marathon explosion and what is happening now in Ferguson, Missouri, is not in the government’s response but in the community’s response.

This is what happens when you ignore the warning signs.

This is what happens when you fail to take alarm at the first experiment on your liberties.

This is what happens when you fail to challenge injustice and government overreach until the prison doors clang shut behind you.

Consider that it was just a little over a year ago that the city of Boston was locked down while police carried out a military-style manhunt for the suspects in the Boston Marathon explosion. At the time, Americans welcomed the city-wide lockdown, the routine invasion of their privacy, and the dismantling of every constitutional right intended to serve as a bulwark against government abuses.

Fast forward 14 months, and Americans are shocked at the tactics being employed to quell citizen unrest in Ferguson, Missouri—a massive SWAT team, an armored personnel carrier, men in camouflage pointing heavy artillery at the crowd, smoke bombs and tear gas—where residents are outraged and in the streets in response to a recent police shooting of one of their own: a young, unarmed college-bound black teenager who had the misfortune of being in the wrong time at the wrong place.

Here’s the problem, though, as I explain in my book A Government of Wolves: The Emerging American Police State, in the American police state that now surrounds us, every time and every place is the wrong time and the wrong place, especially if you still believe you have the right to be presumed innocent until proven guilty by a court of law.

In the American police state, there is no longer such a thing as innocence. We are all potentially guilty, all potential criminals, all suspects waiting to be accused of a crime.

Why is this happening?

Why is it that not a week goes by without more reports of hair-raising incidents by militarized police imbued with a take-no-prisoners attitude and a battlefield approach to the communities in which they serve?

Who or what is responsible for the growing spate of police shootings, brutality and overreach?

As journalist Benjamin Carlson points out, “In today’s Mayberry, Andy Griffith and Barney Fife could be using grenade launchers and a tank to keep the peace.” This is largely owing to the increasing arsenal of weapons available to police units, the changing image of the police within communities, and the growing idea that the police can and should use any means necessary to maintain order.

Moreover, as an investigative report by Andrew Becker and G.W. Schulz reveals, in communities large and small across America, local law enforcement are arming themselves to the teeth with weapons previously only seen on the battlefield. “Many police, including beat cops, now routinely carry assault rifles. Combined with body armor and other apparel, many officers look more and more like combat troops serving in Iraq and Afghanistan.”

It is particularly telling that whereas in the past, law enforcement strove to provide a sense of security, trust, and comfort, the impression conveyed today is one of power, dominance and inflexible authority. However, this transformation of local police into military units did not happen overnight. It cannot be traced back to a single individual or event. Rather, the evolution has been so subtle that most American citizens were hardly even aware of it taking place. Yet little by little, police authority expanded, one weapon after another was added to the police arsenal, and one exception after another was made to the standards that have historically restrained police authority.

Thus, for those like myself who have studied emerging police states, the sight of a city placed under martial law—its citizens under house arrest (officials used the Orwellian phrase “shelter in place” to describe the mandatory lockdown), military-style helicopters equipped with thermal imaging devices buzzing the skies, tanks and armored vehicles on the streets, and snipers perched on rooftops, while thousands of black-garbed police swarm the streets and SWAT teams carry out house-to-house searches—leaves us in a growing state of unease.

Mind you, these are no longer warning signs of a steadily encroaching police state.

The police state has arrived.

While some critics are keen to paint the officers involved in these shootings and lockdowns as bad cops hyped up on the power of their badge, the problem is far more pervasive.

First, there’s America’s obsession with war and all things war-related, reflected in the fact that we spend more than 20% of the nation’s budget on the military, not including what we spend on our endless wars abroad. The U.S. also makes up nearly 80% of the global arms exports market, rendering us both the world’s largest manufacturer and consumer of war.

Second, there’s the nation’s commitment to recycling America’s instruments of war and putting them to work here at home, thanks largely to a U.S. Department of Defense program that provides billions of dollars worth of free weapons, armored vehicles, protective clothing and other military items to law enforcement agencies large and small across the country.

Third, once acquired, this military equipment (which is beyond the budget and scope of most communities) finds itself put to all manner of uses by local law enforcement agencies under the rationale that “if we have it, we might as well use it”—the same rationale, by the way, used with deadly results to justify assigning SWAT teams to carry out routine law enforcement work such as delivering a warrant.

Fourth, in much the same way that community police departments have been finding homes for retired military equipment, they’re also providing jobs for returning military personnel. As PoliceLink reports: “As the competition for coveted law enforcement positions increases throughout the country, police and federal recruiters have the luxury of picking and choosing the absolute best and brightest individuals. More often than not, police chiefs, sheriffs, and recruiters are turning to military veterans to fill these positions as they staff the next wave of warriors in the war on crime.”

Fifth, in addition to staffing police departments with ex-military personnel and equipping them with military gear, the government is also going to great lengths to train local police in military tactics. For example, civilian police train alongside military forces at the Marine Corps Air Ground Combat Center in Twentynine Palms, California, making full use of their weapons and equipment. The collaborated training exercises help police incorporate military techniques into their skillset, including exercises in how to clear and move up a stairway, position themselves as snipers and take aim at opposing snipers, and clear a room. With such military training a.k.a. indoctrination in the works, it’s little wonder that police officers increasingly look upon American citizens as enemy combatants.

Sixth, even those police officers who are not formally trained in military tactics are at a minimum being given greater access to more powerful firepower and trained in how to use semiautomatic rifles. “It’s almost like we’re moving away from being community policing officers to being Navy SEALs,” stated Jack Kervin, president of the Boston Police Superior Officers Federation.

Seventh, there’s the overall glorification of war and violence that permeates every aspect of American society, from our foreign policy and news programs to our various modes of entertainment, including blockbuster Hollywood action movies and video games. Indeed, thanks to a collaboration between the Department of Defense and the entertainment industry, the American taxpayer is paying for what amounts to a propaganda campaign aimed at entrenching the power of the military in American society. As Nick Turse, author of The Complex: How the Military Invades Our Everyday Lives, points out, “Today, almost everywhere you look, whether at the latest blockbuster on the big screen or what’s on much smaller screens in your own home – likely made by a defense contractor like Sony, Samsung, Panasonic or Toshiba – you’ll find the Pentagon or its corporate partners.”

And finally, there’s the American people. Whatever the threat to so-called security—whether it’s rumored weapons of mass destruction, school shootings, or alleged acts of terrorism—it doesn’t take much for the American people to march in lockstep with the government’s dictates, even if it means submitting to martial law, having their homes searched, and being stripped of one’s constitutional rights at a moment’s notice. Americans will unfortunately march in lockstep with the police state, that is, until suddenly they are the ones being held at gunpoint, terrorized and stripped of their rights. At that point, as Ferguson makes clear, it’s almost too late to dial back the police state.

Clearly, the American homeland is now ruled by a military empire. Everything our founding fathers warned against—a standing army that would see American citizens as combatants—is now the new norm. The government—local law enforcement now being extensions of the federal government—has trained its sights on the American people. We have become the enemy. And if it is true, as the military asserts, that the key to defeating an enemy is having the technological advantage, then “we the people” are at a severe disadvantage.

So what’s to be done?

As with all things, change must start locally, in your hometown.

For instance, take a close look at your local police officers, the ones who patrol your neighborhoods and ensure the safety of your roadways. Chances are they look less and less like the benevolent keepers of the peace who patrolled Andy Griffith’s Mayberry and more like inflexible extensions of the military.

These are just a few of the questions we should all be asking of our local police and governing bodies. And when the answers don’t satisfy, we should ask them louder and insist that changes be implemented immediately to ensure that it is “we the people” calling the shots in our hometowns and not armed extensions of the police state.

Remember, a police state does not come about overnight. It starts small, perhaps with a revenue-generating red light camera at an intersection. When that is implemented without opposition, perhaps next will be surveillance cameras on public streets. License plate readers on police cruisers. More police officers on the beat. Free military equipment from the federal government. Free speech zones and zero tolerance policies and curfews. SWAT team raids. Drones flying overhead.

No matter how it starts, however, it always ends the same. Remember, it’s a slippery slope from a questionable infringement justified in the name of safety to all-out tyranny.