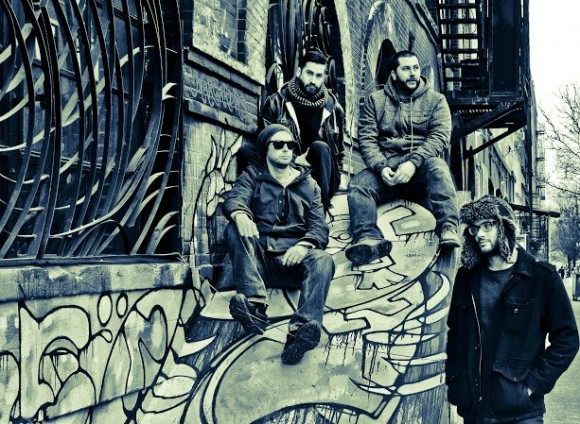 Gadfly presents Looms, an indie rock band based in Brooklyn, New York. The band has just released “Sunshine,” the second single from their upcoming album Waking Days. Looms benefits from a fusion of genres, blending rock with bluesy elements, producing one solid overall sound. Thriving off natural chemistry, Looms continues to make waves and is set to tour the local NY music scene. If you’re looking to expand your indie-rock collection, or simply relax to mesmerizing rhythm, check out Looms!

Gadfly Online: Can you provide us with some background?

Sharif: Looms is the collaboration of Harry Morris Jr., A. Hammond Murray and myself. After a musical project that Hammond and Morris were in together came to an end, they decided to contact me with the hopes of starting a new band. After an initial jam session it was apparent there was a chemistry there and we started talking about material.

GO: Where are you from?

Sharif: The band is based half in Brooklyn and half in New Jersey

GO: What made you pursue a career in music?

Sharif: I didn’t know what to study in college after I graduated high school, so I decided on architectural engineering. I had an interest in this field, but once I started the classes, I quickly realized there was no way I could spend the rest of my life doing that. In that moment, I knew that the only thing I could pursue was music.

Sharif: Our music blends a few different genres together. Elements of blues, jazz, funk, and rock are mixed together in a congruent way to define our sound.

Sharif: One of my biggest influences is Wilco. Their songwriting has greatly influenced me to unify my ideas and emotions and turn them into songs.

Harry: As a group, we are influenced by so many, but a short list would include Miles Davis, Gorrilaz, Radiohead, Hendrix, Stevie Wonder

Sharif: We are releasing our debut LP in April, so we are gearing up to play a few NY shows in support of that.

Sharif: I always hope that people will hear these songs and be able to recognize and relate to the emotions that inspired them. Whether or not they relate to the actual story isn’t as important. It’s more about the feeling.

Harry: We try to sew a soundscape together in each piece that compliments the story. Tonally we expect to bring together sounds people find familiar like the use of the Rhodes piano, and at the same time our use frequencies and colors that are comparable to moog and synthesized sounds.

Sharif: We just spent three days in a studio out in the woods and tracked 11 new songs. The goal is to work on those for the rest of the year and slowly release them as they’re ready.