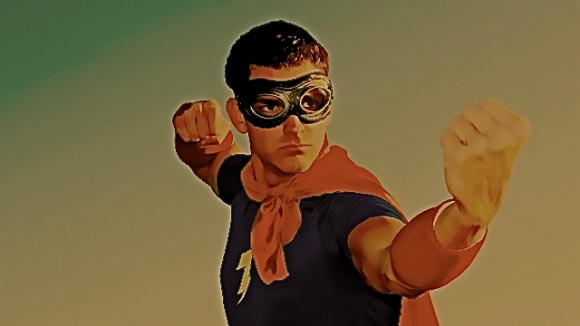 Pardon me for attempting to be
some kind of hero or otherwise
savior figure.  My mistake.
Pardon the garish appearance
of the costume I crafted (it was
a last minute low budget choice)
and pardon my lack of sophisticated
intelligence, weaponry, or astounding
martial arts skills.  I am just a guy
who used to read comics, wanted to be
somebody’s emblem, and now find
the feeling of this cape rather awkward.

The boxers lean heavily on one
another like two sagging towers.
My father’s face is red with frustration
and also leans forward, hand poised
on his knee, a glass of buttermilk close
by (how does he drink it?).
From the kitchen, my mother complains
about fighting.  She wants him to let me
watch cartoons.  But there are not cartoons
on anymore.  Sometimes
the fighters jump like those hopping beans
in the check-out line, which I never see
anymore.  They dodge and parry and thrust
like living swords.  But this fight is slow
and bloated, the gloves seem heavier, eyes
seem thicker, but the crowd seems unfazed.

My favorite character died today
and it happened on the very last page.
Sadistic author.
The entire novel had been leading up
to a contented crescendo, every scrap
of plot a smiling, polite face,
and now I see the fallen form, lying
wounded from the quill.  Well,
the keyboard, at least.
The tombstone will read:
He died to the sound of tapping keys.
Now I must either give up reading
(which seems unlikely) or go about
the business of finding another fictitious
person to spend some time with.
Another faceless face to observe,
another mouth that sounds like my own.