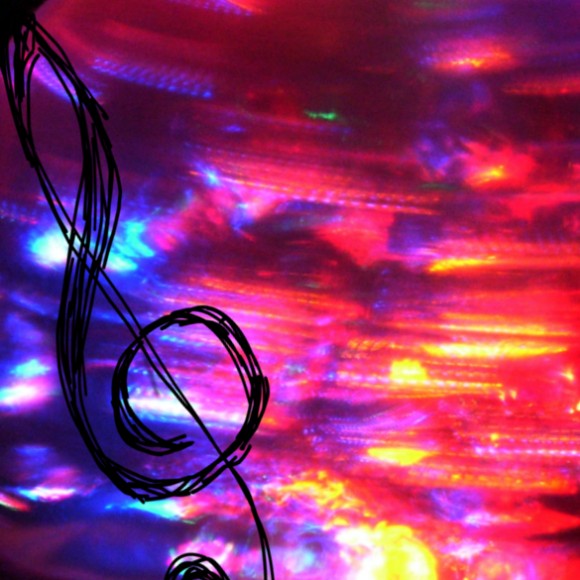 Beyond the poetics of these spaces, I pine to a rolling sky.

Let your long flashes tear the roof off this grass hut.

We leap over the last sign; only our tracks: our mandala

to the middle of nowhere.

I toss away former selves like Ritalin bottles out portholes.

I was once bundles of bruised nerves, but after 30 years

When the levee broke, the harbor crumbled, but now

I keep climbing toward new headlands.

All my life I’ve been trampled under Stormbringer,

until my flamenco stepped in with her hand’s

descarga electrica, shorting out the chair

I was made to sit in before knowing what it was.

A tortured prisoner gets his last request, then escapes

with the Roma dancer to tell his stories of cruelty.

Now we dance to the surprises that feed the right brain

sing away our stories of oppression and wandering,

and splash our feet in new currents.

All our pain and rescuing each other made deep colors

and blazing light against our shadowy blue lament.

But I’ve looked at chromatophores; the goal is galaxies,­­

stretching our gills in the International Station.

We’ll float over the wreckage of ancestral metal and glass.

If only more moments would flash scenes for us:

sailing down routes for new views of you;

not with the old weeping willows or bitter quinces

(the old world pussywillow branches did their work),

not oaks and laurels, but palms welcoming us,

and fresh poppy blooms to help me forget

If each little vacation brought new colors (to you),

flavor-textures of shuffled music (for me),

If I could keep tasting the fusion of those waves

without breaks in that song-scene,

then I would not have to be so human anymore,

and you would be my all-becoming loves.

—“Don’t worry about poets.” – Anthony Piccione in a 1998 phone conversation with me—

Harvested stacks of print articles grow, weighing the gap between poets and readers.

I pondered this one night as I was sweating into my pinesap-stained hammock.

I had spent the day on a ladder sawing eight-foot hedges and digging out stumps.

My jaw loosened; shapes and symbols teased my oxygen-starved brain.

As I pulled them around me to close off the waking world, I saw

poets as stumps growing stalagmites out of their heads, like pastel coral.

Some of the coral budded into globes, then opened to release

The pattern felt as important as music, my synaesthetic taste for music.

Yet it felt so easily missed, like fluorescent coral without blacklights,

waiting to glow colors. The sky kept feeding around its other side,

but that scene just felt too big to view right then.

I awoke on the hammock in the dark to a neighbor’s radio playing opera,

that vibrato singing that can swallow half a scale. Radio waves

bounced off the ionosphere, past Sagittarius, its string resounding.

And I wondered about undiscovered types of coral growing in the ocean,

and poets growing those cauliflowery images no one eats, distracted by

the glut of news/glorified gossip of crime’s scars, or celebrity worship

that eclipses our view of auroras, and our own way to reach upward.

But then I recalled the sky pattern, and somehow knew

the inverted rain could emerge anytime, and that

we may never know what happens to poems

any more than notes played into the air,

or these words you may read into the air

Lloyd Milburn teaches creative writing, literature, and composition in colleges in upstate New York where he earned a creative writing MA. His poetry has been published in Permafrost, Talking River, Willow Review, Ithaca Lit, and Sandy River Review. His poem “Unschooled” won a poetry award from Willow Review in 2012. A lifelong interest in synesthesia influences his poetry and his music recordings. His first CD released in 2013 includes two of his original poems and lyrics.