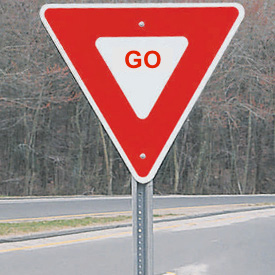 Lately, I have come across some “fun” drivers. It just seems like everybody is wrapped up in their own little world or texting on top of the steering wheel while driving. STOP Signs have become optional. Apparently, so have YIELD Signs, but I’ll get to that in a few moments. And I love the drivers who can’t merge. It seems to be a pandemic lately. Just yesterday I witnessed a yellow hot rod blowing past a YIELD sign, nearly colliding headfirst into a black SUV, and then swerving around them and almost hitting me as I came down the side road. If only they had YIELDed, but nobody wants to take the blame. Let’s play the Scapegoat Game.

So, this morning was quiet. I took the recyclables out, took care of the cats and dogs, took medicine with nasty cold cereal, and I was ready for work. I let the car defrost for a few moments while playing with the radio stations. I try not to play with my car while driving unlike other people, and my cell is tucked away behind my seat in my black bag. The road was clear, and I love mornings where I don’t have to dance with other drivers. And I decided, hey, I’ll take Route 17M to Route 6. What could possibly happen on such anOh, beautiful morning?

Nothing. At least, not at first. Sure, as we headed onto the exit leading onto Route 6, the gray car danced into the opposite lane, trying to cut me off, but oh look, there are cars coming in that direction. Then, he decided to behave himself and keep his distance. He kept a good distance behind me, so I didn’t worry about him. And then we reached the YIELD sign, splitting Route 6 from the Palisades Parkway, and SMASH.

I slowed down at that YIELD sign, waiting for the traffic to clear. I thought, I don’t want anyone to hit me, and I am at a YIELD sign. I would let the traffic pass and then go, but some people bright and early are in such a damn rush. And I thought he was a good distance behind me, but now, I was on the edge, pushed to the side of the road because his foot found the gas pedal.

At first, I thought he left the scene of the accident. I watched the cars pass me by, and then I realized that he was still behind me, pulled over also on the side of the road. He got out of his car, and so did I. I screamed at him, and he just looked at me, saying, “Are you okay?”

“Are you kidding?” Then, I asked for his information, but behold, it wasn’t even his car. The car belonged to some lady that wasn’t even there, and he refused to show his license, insurance and registration. Amazingly enough, he gave his name, her name, his cell, and license plate, and then we had a fun time trying to call the police. But that area is notorious for no cell phone reception, so what do you do in this situation? What can you do but leave and find cell reception, and then call the police, who will then tell you that you should never have left the scene of the accident.

So, what I thought as an Oh, beautiful morning has become an Oh, horrible nightmare. The last car accident I was in was back in 2009. I was being a good girl stopping for a yellow school bus, the girl behind me followed suit, and the guy behind us didn’t. And SMASH, and here we are four years later, where people still don’t pay attention while driving. But this was an interesting twist like a suspense novel: having the driver of the car not the owner and not showing any proof of being able to drive the car; so I wonder, how will this end? I guess time will only tell.