Describing themselves as “moody rock,” upcoming band Kalen and the Sky Thieves unveil “Island”, a single that expresses a soulfulness, and maturity that has been missing from the genre for some time. “Island” is a soft but powerful ballad about a relationship affected by one half’s inability to overcome their emotional hesitancy and insecurities. It specifically resonates though, through its honesty in both lyrics and execution. Moving through different tides of such a relationship, Kalen croons for a connection and hopes for the other’s potential growth, but eventually, she accepts the “salvation in letting go.” Keeping to the beautiful simplicity of the concept, Kalen and the Sky Thieves worked together with director Carmen Osterlye to create a poignantly subdued music video. 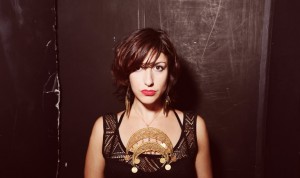 Surrounded now by her Sky Thieves, Kalen explains that the piano-driven song she wrote a few years back has swelled with new texture and further sincerity; the new, musical coalition has layered their sonic interpretations of the sea: Will Hanza’s “pedal magic” reflects the auditory difference between the island and the sea; Wayan Zoey softly creates, what Kalen confirmed is, “a rolling drum that feels like the tides”; and Jay Giacomazzo is luxuriously fills those moments of transition with melodic trills.

And so between their duty in reclaiming the sky from advertisements and urban sprawl, Kalen’s Sky Thieves join her for another dynamic EP, titled Bluebird, which “mov[es] from soaring tracks, like ‘Island,’ to heavy and hard [tracks], to funky and dance-y” beats. Such energy likely derives from the diversity of their musical backgrounds and interests: “KTS is an amalgamation of many styles. Each [of us] comes from a very different musical realm so each song is a hybrid of some sort.” But, that does not mean that the songs, or even albums are sonically or conceptually unrelated. Indeed, Kalen adds,

“To me the conceptual and spiritual themes on Bluebird are a follow up, a response to my last solo release Fallen From The Sun, which was a darker affair. This album begins looking back towards the light, but as we all know, that’s not a linear, one-dimentional process. The album is sort of that messy arc from a place of sadness to anger, to looking at reality, to excitement and reflection and towards positivity. “Island” is the fourth track, or step, on that journey to letting go.”

And this band’s refreshing, emotional maturity and resonation with a wide audience is only ever going to get better. Upon reflection of their musical journey and growth, Kalen agrees,

“I felt like we [are] starting to speak a language up there that we’re all getting more fluent in – like when you start dreaming in a new language. This is really exciting to me: this adventure of what’s to come musically with these awesome guys who I love as people and players. This growing communion with the music, the cosmos and our audiences is what’s exciting me: the future memories in the making.”

Find out more about the definitely upcoming Kalen and the Sky Thieves, and their tours here.