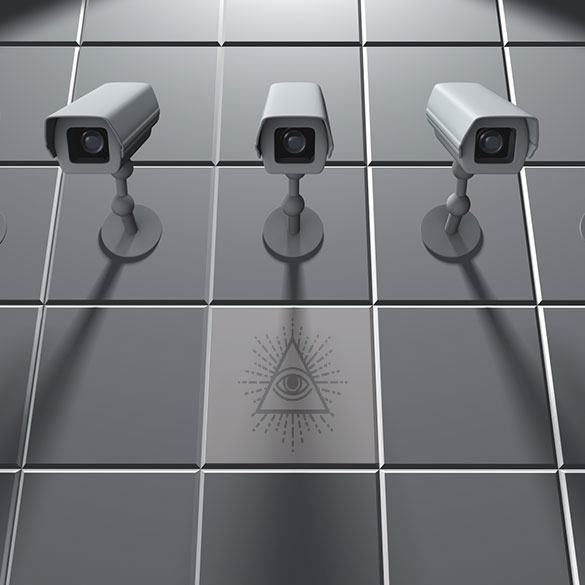 “Totalitarian paranoia runs deep in American society, and it now inhabits the highest levels of government… Since the terrorist attacks of 9/11, America has succumbed to a form of historical amnesia fed by a culture of fear, militarization and precarity. Relegated to the dustbin of organized forgetting were the long-standing abuses carried out by America’s intelligence agencies and the public’s long-standing distrust of the FBI, government wiretaps and police actions that threatened privacy rights, civil liberties and those freedoms fundamental to a democracy.” – Professor Henry Giroux

Relationships are fragile things, none more so than the relationship between a citizen and his government. Unfortunately for the American people, the contract entered into more than 200 years ago has been reduced to little more than a marriage of convenience and fiscal duty, marked by distrust, lying, infidelity, hostility, disillusion, paranoia and domestic abuse on the part of the government officials entrusted with ensuring the citizenry’s safety and happiness.

Don’t believe me? Just take a stroll through your city’s downtown. Spend an afternoon in your local mall. Get in your car and drive to your parents’ house. Catch the next flight to that business conference. While you’re doing so, pay careful attention to how you and your fellow citizens are treated by government officials—the ones whose salaries you are paying.

You might walk past a police officer outfitted in tactical gear, holding an assault rifle, or drive past a police cruiser scanning license plates. There might be a surveillance camera on the street corner tracking your movements. At the airport, you may be put through your paces by government agents who will want to either pat you down or run scans of your body. And each time you make a call or send a text message, your communications will most likely be logged and filed. When you return home, you might find that government agents have been questioning your neighbors about you, as part of a “census” questionnaire. After you retire to sleep, you might find yourself awakened by a SWAT team crashing through your door (you’ll later discover they were at the wrong address), and if you make the mistake of reaching for your eyeglasses, you might find yourself shot by a cop who felt threatened.

Is this the behavior of a government that respects you? One that looks upon you as having inviolate rights? One that regards you as its employer, its master, its purpose for being?

I don’t think so. While this hyper-militarization of the government is being sold to the public as a means of preventing terrorism and maintaining national security, it is little more than a wolf in sheep’s clothing. In fact, as I document in my book A Government of Wolves: The Emerging American Police State, what we are dealing with is a police state disguised as a benevolent democracy, a run-away government hyped up on its own power and afraid of its citizenry, whose policies are dictated more by paranoia than need.

Making matters worse, “we the people” have become so trusting, so gullible, so easily distracted, so out-of-touch and so sure that our government will always do the right thing by us that we are ignoring the warning signs all around us, or at least failing to recognize them as potential red flags and opportunities to ask questions, demand answers, and hold our government officials accountable to respecting our rights and abiding by the rule of law. (Remember that the people of Stalin’s Soviet Union and Hitler’s Germany also failed to ask questions, demand answers, and hold their government officials accountable until it was too late, and we know how that turned out.)

Perhaps the more pressing question that needs to be asked right now is this: have we become the enemies of our own government? It’s not an unreasonable question, given the government’s actions in recent years.

To start with, the massive ammunition purchases by various federal agencies begs the question: why do domestic agencies having nothing to do with national defense, such as the Postal Service, the Department of Education, the IRS and the Social Security Administration (SSA), need mass quantities of ammunition and weaponry?

In January 2014, the United States Postal Service put up a request for small arms ammunition. The Department of Education, IRS, and the SSA are also among the federal agencies which have taken to purchasing ammunition and weaponry in bulk.

Despite being questioned by members of Congress, federal agents have generally stonewalled inquiries into ammo purchases. While the SSA put out a statement noting that they employ about 300 special agents with full law enforcement authority, including the power of arrest, the Department of Homeland Security (DHS) has gone so far as to unilaterally redact information on various ammo purchases, and in one instance, when purchasing ammo intended for Immigration and Customs Enforcement (ICE), claimed that the contract could not be open to competition because there was an “unusual and compelling urgency” to purchase ammunition.

It was recently revealed that the DHS plans on purchasing 75.1 million rounds of ammunition in 2014. In the past two years, the DHS purchased “1.6 billion rounds of hollow-point ammunition, along with 7,000 fully-automatic 5.56x45mm NATO ‘personal defense weapons’ plus a huge stash of 30-round high-capacity magazines.” They also received over 2,500 Mine-Resistant Armored Protection (MRAP) vehicles, which they have begun passing around to local police departments across the country.

As Larry Bell, writing for Forbes, put it, “let’s not jump to a conclusion that this involves anything ‘conspiratorial’ on the part of government leadership. Instead, it might be more appropriate to apply a different term. What about ‘stupid’?”

Indeed, we should not jump to conclusions, but we should be asking questions and demanding answers. After all, these ammo purchases are not taking place in a vacuum. They are occurring alongside a number of other troubling government activities that should have every American asking: what exactly is the government preparing for?

For example, in February 2014, the TSA awarded a contract to City Chemical LLC for $21,000 worth of potassium chlorate, a chemical compound often used in explosives. On January 10, 2014, the Federal Emergency Management Agency (FEMA) made a statement enlisting the service of contractors who could “supply medical biohazard disposal capabilities and 40 yard dumpsters to 1,000 tent hospitals across the United States; all required on 24-48 hour notice.”  This coincides with other medical requests seeking massive amounts of supplies, such as “31,000,000 flu vaccinations,” “100,000 each of winter shirts and pants and the same for summer” and other goods and services requests as well like tarps, manufactured housing units, and beverages.

Taken as isolated events, these requests may not seem suspect, but throw into the mix a variety of military-police training exercises which are occurring across the country, ostensibly to “train” first responders to deal with emergency situations and social unrest, and together they paint a more alarming picture.

In Richland, South Carolina, for example, U.S. army special forces participated in joint and secretive exercises and training with local deputies. The public was blocked from obtaining any information about the drills, other than that they might be loud and should not cause alarm. Documents obtained recently by the website MediaTrackers indicate that the Ohio National Guard conducted a training drill last year which involved responding to an imaginary terrorist threat in which “school officials plotted to use chemical, biological and radiological agents against members of the community.” The alleged terrorists were also portrayed as gun rights advocates. The Ohio National Guard has also conducted a training exercise involving a fictional left-wing environmental terrorist group.

When one considers the growing list of opinions and activities which may make a federal agent or government official think you’re a terrorist, or sympathetic to terrorist activities—advocating states’ rights, believing the state to be unnecessary or undesirable, “conspiracy theorizing,” concern about alleged FEMA camps, opposition to war, organizing for “economic justice,” frustration with “mainstream ideologies,” opposition to abortion, opposition to globalization, and, ironically, ammunition stockpiling—it becomes that much harder to answer “no” when asked “have we become the enemies of our own government?”

Since the 1980s, the U.S. government has acquired and maintained, without warrant or court order, a database of names and information on Americans considered to be threats to the nation. This database, reportedly dubbed “Main Core,” is to be used by the Army and FEMA in times of national emergency or under martial law to locate and round up Americans seen as threats to national security. As of 2008, there were some 8 million Americans in the Main Core database. It is believed that Main Core was used to spy on certain Americans in the immediate aftermath of 9/11.

The stockpiling of ammunition by domestic agencies, FEMA contracts for biohazard units, flu shots and clothing, military drills on U.S. soil, databases to identify “dangerous” citizens, and the government’s ever-broadening definition of what kinds of views qualify as terrorist?

At the end of the day, we are left with more questions than answers and the deepening concern that these covert programs are just the tip of the iceberg when it comes to a tendency on the part of the government to view the American citizenry as enemy #1. Meanwhile, the government response to all of this remains “just trust us.” Yet as Professor Giroux points out:

“Why should anyone trust a government that has condoned torture, spied on at least 35 world leaders, supports indefinite detention, places bugs in thousands of computers all over the world, kills innocent people with drone attacks, promotes the post office to log mail for law enforcement agencies and arbitrarily authorizes targeted assassinations? Or, for that matter, a president that instituted the Insider Threat Program, which was designed to get government employees to spy on each other and ‘turn themselves and others in for failing to report breaches,’ which includes ‘any unauthorized disclosure of anything, not just classified materials.’”

Indeed, why should we trust them? Or have too many of us become so indoctrinated that we have become like Winston Smith in Orwell’s 1984, insisting that 2 plus 2 equals 5?