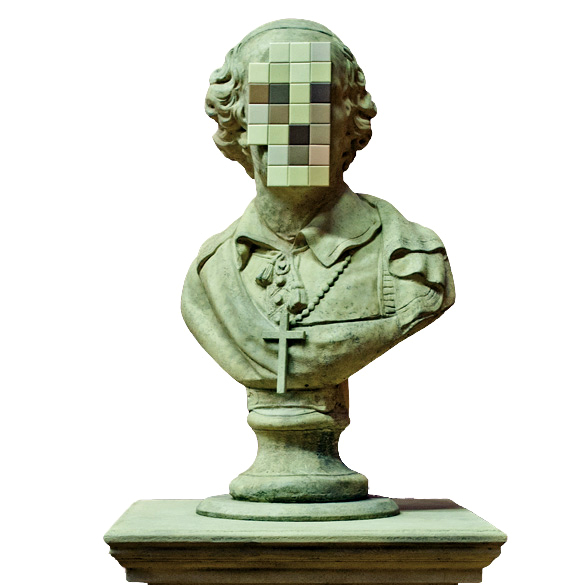 “Think outside the box, collapse the box, and take a fucking sharp knife to it.” – Banksy

Over the years, Banksy has cultivated a reputation, a persona even, based upon a surprisingly small amount of personal information. This combination of international popularity and lasting anonymity raises many questions, such as; How does a purported “guerrilla artist” have a spokesperson? Should he be considered a serial vandal or a modern philosopher? Seriously, how did no one notice some guy sticking paintings on the walls of the Tate Britain? And perhaps most importantly, Why does Banksy, with his thought-provoking works and whispers of defiance, invoke feelings of both unease and praise?

Futile searches to flesh out who Banksy is, if they don’t end in bitter frustration (1), require people to get a little crazy and examine his works simply for what they are and what they convey. For instance, consider Banksy’s piece, Cardinal Sin, which was placed in the Walker Art Gallery in Liverpool in late 2011 (2). The replica 18th century bust depicts a priest, whose face is covered with tiles in a pixilated pattern. The piece must be examined for what it is: a priest shamefully hidden behind a pixilated mask, as if on the news for report of sexual abuse by the Catholic Church. The bust, placed next to other works of classical 17th century art, suggests that scandal in the Church is becoming a permanent characteristic in the historical image of the Church.

As Banksy’s religious views are unknown, detractors would be hard-pressed to legitimately make the argument that Banksy created Cardinal Sin with a personal vendetta against the Church. In other words, the public is encouraged to admit that perhaps the Church, or part of larger society itself, is flawed and should be subject for discussion. The public is prevented from blaming a single, manageable person, Banksy, for forcing personal views on the public through his work. Instead, through shock factor and anonymity, Banksy prods society to question its own actions and behaviors, instead of excusing uncomfortable situations as uncommon occurrences or the biased view of one individual.

The most reliable source of information on all things Banksy is probably his website (3), as it is said to be updated by the artist himself. A single “Questions” page, for inquiring minds, provides little factual insight into Banksy the person; blasé Banksy commentary, however, abounds. Although these stoic retorts imply an indifference towards the whims of society, the mere existence of the website feels incongruous with Banksy’s apparent apathy. While many graffiti artists keep online records of their art due to the ephemeral nature their work, the quality and stylish design of Banksy’s website, combined with his nonchalant rhetoric, highlights the delicate philosophical clashes that the mysterious Banksy persona generates. The site, if anything, seems to exist not to laud Banksy himself and his inspirations, but to constantly redirect the viewer back to his works.

Banksy first rose to prominence in Bristol, England, in the early Nineties. The story goes that he began using stencils to increase the efficiency of his works, moving throughout the United Kingdom to London, wielding aerosol paint cans and blithe political and social commentary. Literally leaving his mark in locations such as London, North America, and even the West Bank (4), Banksy has since crept through the hazier side of the law to dole out his own version of sardonic justice, one stenciled image at a time. In doing so, the mischievous artist has garnered an impressive following, ranging from young urbanites to full-pocketed art collectors, the latter of which will bid into the thousands for a coveted Banksy original. (5) For instance, the recognizable Love is in the Air, which depicts a semi-masked rioter poised to hurl a bouquet of flowers, was expected to sell last March for $63,000 to $95,000. 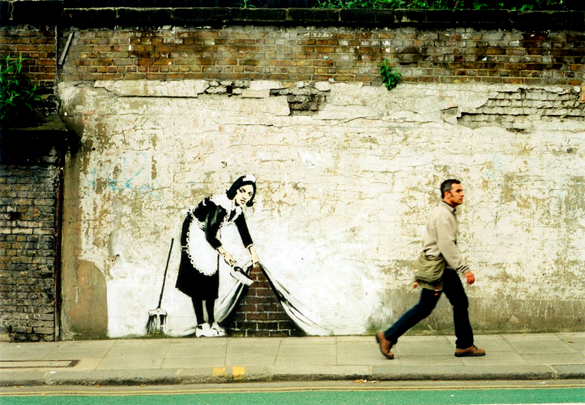 Works by Banksy, despite their tendencies to critique touchy subjects such as foreign policy, government action, and capitalism, are largely embraced and respected by diverse crowds. Banksy’s 2006 commissioned piece, Sweeping It Under The Carpet, which depicts a maid surreptitiously lifting a corner of concrete wall, may appeal to graffiti artists for its stencil technique, the general public for its commentary on Western society’s unwillingness to face grave issues such as AIDS (6), and collectors merely for its Banksy association. Under the banner of Banksy, the underground world of graffiti artists, a general social consciousness, and the refined world of modern art are melded into one.

To match his growing popularity, Banksy has expanded his medium beyond city walls: in 2006 Banksy organized a well-attended art exhibition in Los Angeles, in 2009 he held his most extensive exhibit yet at the Bristol City Museum and Art Gallery (7), he has published books, and created a documentary, Exit Through the Gift Shop, which was nominated for an Academy Award in 2011.

However, being popular and universally loved is a difficult task, especially when your artwork is technically an illegal activity. During the London summer Olympic Games, which ostensibly sought to “celebrat[e] contributions the UK has made to the world through innovation and revolution, as well as the creativity and exuberance of British people,” (8) the closest anyone in London came to viewing an Olympic-themed Banksy work was on a computer screen. 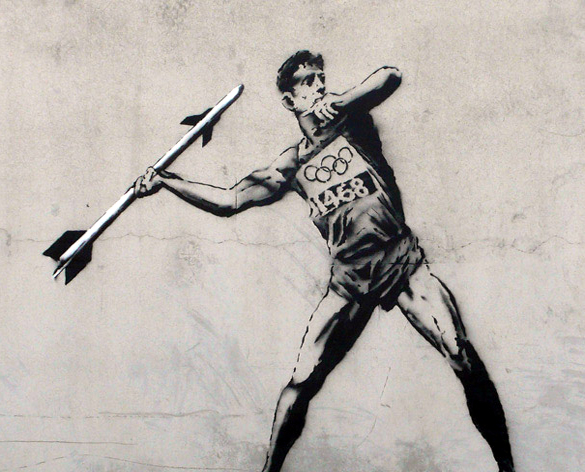 In fact, the presence of street art in London over the past year has generally decreased, due to efforts by the City and various organizations to clean the area and prevent further “quality of life crimes” (9). In one perhaps overreacting pre-emptive sweep, the British Transport Police arrested Darren Cullen, a “professional graffiti artist” previously employed by Adidas, and barred him from straying within a mile of any Olympic venue after confiscating his computer equipment and phone (10).

The City of London’s decision to implement measures that would impair arguably some of its more “creative and exuberant” artists, especially one as internationally well-liked as Banksy, is perhaps indicative of London’s unease over the recent global pattern of large reactions to small sparks. With the whole world watching during the Olympics, keeping new Banksy pieces out of the public eye probably seemed like the safest bet.

Whether Banksy would actually condone protests or rampages or revolutions is completely unknown. Although many of his more political works contain reactionary undercurrents, the whole idea of creating art to promote change comes across as more passive than aggressive. Perhaps the most telling of Banksy’s view on enacting change in the world is a quote credited to him saying, “There’s nothing more dangerous than someone who wants to make the world a better place.” Of course, this prompts the immediate question of whether or not Banksy wants to make the world a better place. 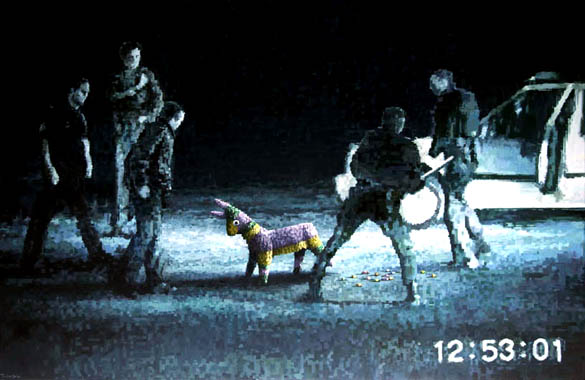 While we imagine most heroes of our time sacrificing themselves to save a world falling into chaos, it doesn’t seem that far fetched to imagine Banksy tucked away in this London studio, munching on a bag of flavored crisps while watching the world crumble. Of course, this is all speculation. Few, if any, actually know the inner thoughts and motivations of the man called Banksy. Superficially he comes off as satirical, entertaining, and nonchalant. However, the most defining characteristic of his persona is the quiet and penetrating intelligence that permeates his work. The crafted persona of Banksy is a project itself, a long-standing commentary or last laugh at society. Again, questions are raised: How is the paradox of Banksy to be interpreted? Are we falling right into his hands by wondering? Is that such a bad thing?

One Response to Whose Hands are We In? Banksy’s Anonymous Success