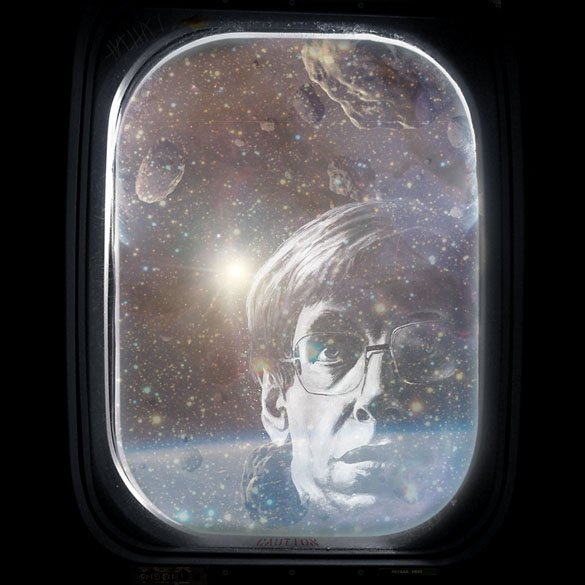 “Did you ever see the end of The NeverEnding Story, where Atreyu awakes on Falkor and finds themselves lost, drifting around debris with no sight of home or the Ivory Tower?”

“That’s what it looks like out there.  Nothing but debris.”

“Maybe, the nothing really won.”  He went back to his reading.

“Maybe, it did.  If only we had something to guide us, something to lead us back home.”  She pressed her hand against the cold, clear glass window.  “I want to go home.”

“We can’t go home.”  He slumped back against the wall, stretching his legs out before him.  “The shock wave knocked us here.”

“But where is here?”

“You can’t be serious?”  She turned to look at him.  “Haven’t you ever heard that expression?  ‘There are no happy endings because nothing ever ends.’”

“The Last Unicorn.”  She nodded, but she was still sad.  “There’s nothing we can do.  You know that.  Thinking of the past and its classics doesn’t change anything.  It doesn’t change our fate.”

“Look out the window.”

“I’ve been looking out the window.  The stars are too damn far away, so far away that their light is like a grain of sand.  We’re lost, and nobody is coming to look for us.  Doesn’t that scare you?”

“I stopped being scared when the rest of the ship gave way.  Nobody is going to come and look for us because nobody knows that we survived.  It’s just a matter of time, and then we too will die.”  He glanced down at the book in his hands.  “Everything has a beginning, and everything has an end.”

“Well, we were in here when it happened.  We’re lucky.”

“Look out the window.”

“Look!”  Now, he rose to his feet with his book still in hand.  “We get to see something that nobody ever gets to see.”

“The edge of the universe.”  He stood beside her.  “It’s like a black ocean with rocks drifting along its surface, and we drift with it.  Or if we push, we can fall over the edge, and then we won’t be playing the waiting game any longer.”

“Then, let’s meet our end instead of killing time.”  His grip tightened over hers.  “I’m scared.”

“Then, that’s it.”  She glanced down at the book in his hands.  “A Brief History of Time by Stephen W. Hawking.  Any good?”

“We are at the end, sweetheart.  It’s better now, if we just let go,” and with that said, the book slipped from his hand and disappeared into the darkness below.