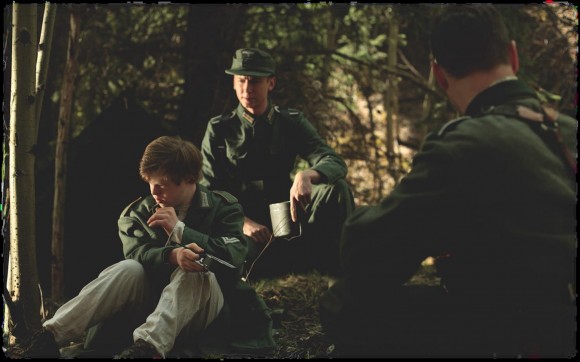 Why the short film Menschen is Important

“Menschen is a live action short film that packs a complex story into under 30 minutes time. The story takes place at the end of WWII, the troops are weary and history is about to declare the victors. What we are not reminded of in textbooks: on both sides of every gun beats the heart of a man, a man born to a mother just like you were, and what brought him to this place? Who knows? But we all begin and end the same.” – From Menschen the Movie as Art, a Brief Review.

By this time in the war, Hitler’s machine, fueled by prejudice and fear, had taken millions of lives. The Nazi’s began their mission of “racial hygiene” in 1939 with what is now known as the T-4 project. This was the beginning of killing centers and the process of gassing humans was invented for this purpose.

These horrific acts of violence against humankind happened less than a century ago. Around the world people fought and hid in attempt to escape or defeat this centralized and powerful evil. The film Menschen does not analyze these horrors, but instead, through the story of one commander and his men, shows the viewer how these threads wove, connected, and strayed within this isolated band of men and the “found boy” with Down syndrome who then accompanies them. 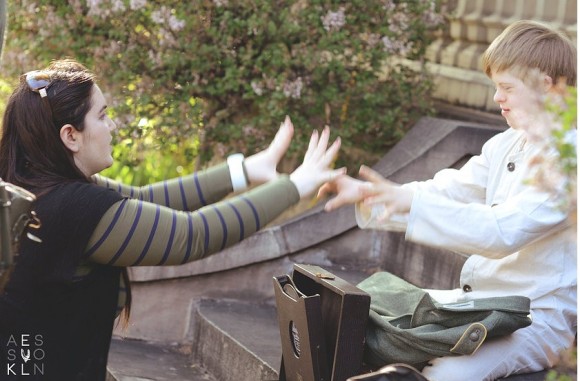 In the making of Menschen, Sarah Lotfi, the film’s writer and director, involved a variety of supporters and collaborators. Reenactment groups worked with Lotfi from the start to check and affirm the films authenticity from environment to costumes and artillery. Her own family provided inspiration, as she has both a younger sister and brother with Down syndrome. And she recruited the help of local Down syndrome groups to put out the word for casting calls as the audition process began for the role of Radek, the “found boy” character in the film who has Down syndrome.

This lead to Lotfi’s meeting of Connor Long. Upon one glance she knew Connor was the right young man for the role of Radek. Connor Long emoted his lines with great sincerity at the audition and carried that passion throughout the filming process. Though this was his first role in a film, he was named ‘Best Actor’ for his performance in Menschen by the Filmstock Film Festival.

Having Long on the screen is important. People with Down syndrome, and those who love them, appreciate the role model, and viewing a successful self-advocate is empowering. More broadly, seeing people with diverse abilities in the media is important to improving acceptance and community involvement for everyone. Lotfi herself admits that she has witnessed these positive effects at the film’s screenings even more than she expected.

Relating to “Life Worthy of Life”

“Life Worthy of Life” is the film’s tagline; the theme perpetuates through every aspect of the film’s making and screening. The phrase reflects the historical importance, as it is the reversal of the Nazi’s rationale for killing disabled adults and children. The phrase, in correlation with those differently abled, reinforces the value of diversity in the film and in our communities. In regards to those with a disability, Lotfi believes, “When a person has no voice or a strong advocate then you have to share that responsibility.”

Lofti addresses diversity in regards to the able as well. She notes, “You have to face this if there is a disability or not. There’s an image presented in the media of some unattainable image of perfection. That’s a mirage. Real life, wherever you come from, should be valued. And should have an opportunity to develop, flourish, and prosper.” In discussing the film with Lotfi, whatever the question, this theme seems to creep into the answer, whether in her praise of Long and his self-advocacy, or her own challenges in taking on stereotypes as a multi-cultural, female director making a war pic.

Menschen is available to audiences via Film Screening and Festivals around the world. The Arc is collaborating to expand its reach around the US. If you are interested in more information, contact your local Arc, and check out the Menschen Website or Facebook.

By day Mardra Sikora balances a patchwork of community, advocacy, work and family. Also by day she writes. Mardra believes in the power of words and uses both fiction and non-fiction to advocate for and with her adult son Marcus. You can find her and Marcus on the blog Grown Ups and Downs, Facebook and Twitter as well as on various blog networks including The Huffington Post.