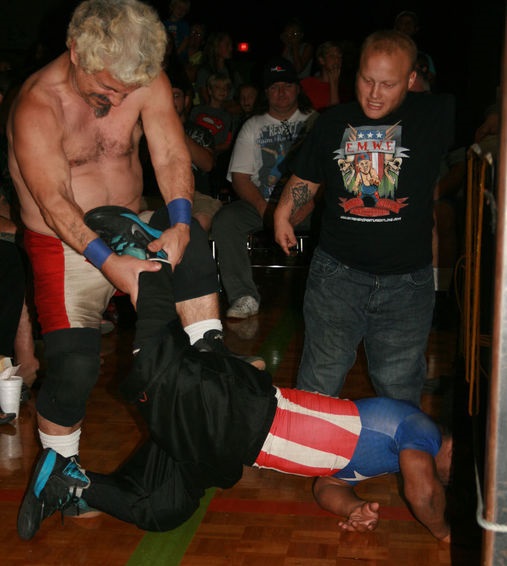 It was Saturday night and it was, literally, the best thing going on in the beat-up, dusty, old town.  The girls that dragged us there all wore their fancy dresses, and they made sure we wore nice collared shirts.  It was what almost everyone in the venue would refer to as “Sunday attire.”  The marquee in front read, “Extreme Midget Wrestling”, and by god, it was in every facet or sense of the word.  However, I thought the term would be offensive—I asked if they’d rather I call it something more politically correct. They said it was a sanctioned event.

The sponsors chose to hold the event in a gnarled skating rink.  The place had seen its hey-day during my childhood.  Nowadays, it stood as the relic of a bygone house of glory and wonder for budding teenagers and had subsequently devolved into a cesspool for the bottom barrel of the redneck community.  There was a large sign posted in front of the building expressly prohibiting guns, knives, drugs, alcohol, fighting, and outside food or drink.  The most unsettling thing about it all was the number of small children that were in attendance.  It was truly the theater of the damned, and at $20 a head, those midgets really knew how to squeeze you.

The lights dimmed, and the show started around 9pm; it was every bit the spectacle you would expect it to be.  The announcer told us that the first match would be between a Canadian wrestler named Lil’ Nasty and his American opponent, King Midget.  Lil’ Nasty entered the ring first wearing spandex shorts with a Canadian flag emblem across the crotch.  He was much older than I expected him to be.  He was maybe around 40.  Lil’ Nasty had a smile like a Jack’ O’ Lantern, presumably from years of hard meth use, and he had dyed his curls bleach blond.  Some maniac had given Lil’ Nasty a microphone with which he made expert use of, like some primeval carnie, jeering at the crowd, sending them into a frenzy of animosity and hatred towards, not only himself, but the great nation of Canada.  Stupidly, I bet my brother he would win because I was promised 5 to 1 odds.  I was the only one in the entire building rooting for the little bastard.

At the height of Lil’ Nasty’s antagonizing microphone performance, King Midget made his glorious entrance.  He was shorter than his opponent, Lil’ Nasty.  King Midget had dark black skin and long curly hair pulled into a pony tail.  He was wearing a Puerto Rican flag as a shirt, and he raised his tiny fists in the air as he climbed the ropes, the crowd chanting, “USA! USA!” repeatedly.  At some point in the match, King Midget’s shirt was ripped off and across his chest was tattooed in cursive letters: “King Midget.”  It was at that point I knew how serious this was.

The match was brutal.  The wrestlers displayed two types of violence, one of which seemed innocently harmless with fake hits and easy slams.  The other type of violence involved metal chairs, baking pans, and Lil Nasty head-butting King Midget in the groin.  King Midget ultimately and anticlimactically won the match and I lost my wager to my degenerate gambler of a brother.

The second bout was between wrestlers named Lil’ Steve-O and Lil’ Chicken Head; I was beginning to notice a theme.  Lil’ Steve-O was one of the few wrestlers that evening that didn’t appear to be physically or developmentally disabled.  He looked as if he followed Insane Clown Posse on tour, and he had on face paint like Mel Gibson in the movie Braveheart.  Lil’ Chicken Head wore a mask akin to that of Mexican wrestlers.  It was amazing how such a diverse group of people could make diversity the last thing on anyone’s mind.  Oddly, neither beer nor alcohol were being served, and it was to my dismay because, good god, I could have used a drink at that point.

I took Lil’ Chicken Head to win the match at even money.  The match was getting along without any indication of if my midget wrestler was going to win or not when seemingly out of nowhere, the DJ started playing a song by Coldplay over the loud speakers.  I looked anxiously around the room to see if Roy Schneider had come back from the dead, smoking a cigarette and talking about being in the twilight zone.  I gripped my seat firmly by the sides and hung on for dear life.

At some point during the second bout, the midget wrestlers threw each other out of the ring and started slamming themselves into the plastic chairs in front of our ringside seats.  Lil’ Steve-O had slammed Lil’ Chicken Head head first into the ground at our feet.  My brother, even though he had bet against him, bent down to Lil’ Chicken Head as he lay helplessly on the floor and whispered to him: “Come on, Lil’ Chicken Head, you’ve got to dig deep.”  Astonishingly, Lil’ Chicken Head must have heard my awful brother’s inspirational words.  He rallied himself and fought back, bringing himself as close as he possibly could to getting pinned before he was able to turn the tables and expertly perform a suplex to pin Lil’ Steve-O and win the match. 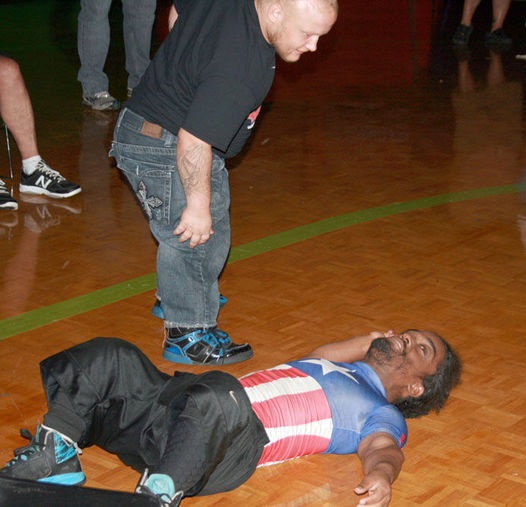 Next came an intermission for the midget wrestlers to rest and prepare for the final bout, and also for vendors to peddle popcorn and soda to the masses.  I went outside to smoke a cigarette because I would need some kind of relief to carry on.

The final bout was the main event of the evening starring a wrestler called Lil’ Show.  He wore gold pants and a black tank top and had every bit the body of an oversized D-cell battery.  Once Lil’ Show entered the ring, his non-midget manager entered behind him.  The manager, who must have been a lunatic, scolded the crowd for the incumbent immoral bastards we were and he called us idiots for not taking the evening as seriously as he expected us to.  It was amazing to watch him not only act as if he was in the moral right, but also to rile the crowd up, in presenting himself and Lil’ Show as the bad guys.  The announcer then introduced Lil’ Show’s competition, a hometown hero that went by the handle Lil’ Fabio.  The addition of the prefix “Lil’” was an ultimate necessity because I seriously doubt the fan base there that evening would have known that they were staring at midgets without it.

“I’m Bad” by Michael Jackson began playing over the loud speakers as the match started.  I knew it would be an epic fight that generations of rednecks would retell their grandchildren.  The theatrics were remarkable, and it was apparent why these two were the stars.  The false punches and the fake falls were performed with as much precision as amateur midget wrestlers could manage.  Lil’ Show hit his crescendo when he put Lil’ Fabio in one corner and then did the worm across the ring to hit him in the groin with his fists.

Lil’ Show’s manager made himself of use, hitting Lil’ Fabio in the head with a balloon hammer until Lil’ Fabio had had enough and chased him around the arena, threatening to hit him with a plastic “Caution Wet Floor” sign.  While Lil’ Fabio was distracted by the manager, Lil’ Show was able to blind side him like a raging bull.

Lil’ Fabio eventually won the match and as he did, the other “bad guy” wrestlers attacked him onstage.  They beat him senselessly until the other two “good guy” wrestlers reentered the ring and came to his defense much to the excitement of the entire crowd.  The DJ started playing “We Are the Champions” by Queen.

It all ended in some kind of haze as Lil’ Nasty, still wearing his spandex Canadian flag shorts, thanked any audience members who served in the Military for protecting our freedom, and everyone cheered.  The entire evening was an exercise in futility and is the strongest case I can make for the legalization of drugs.