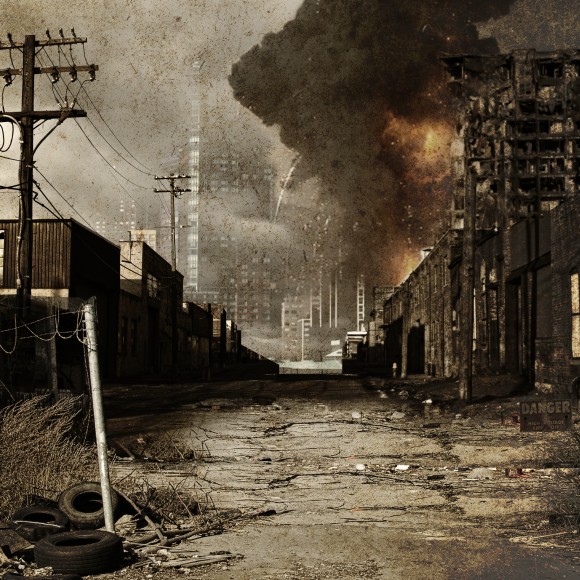 “A government which will turn its tanks upon its people, for any reason, is a government with a taste of blood and a thirst for power and must either be smartly rebuked, or blindly obeyed in deadly fear.”—John Salter

We have entered into a particularly dismal chapter in the American narrative, one that shifts us from a swashbuckling tale of adventure into a bone-chilling horror story.

As I document in my new book Battlefield America: The War on the American People, “we the people” have now come full circle, from being held captive by the British police state to being held captive by the American police state. In between, we have charted a course from revolutionaries fighting for our independence and a free people establishing a new nation to pioneers and explorers, braving the wilderness and expanding into new territories.

Where we went wrong, however, was in allowing ourselves to become enthralled with and then held hostage by a military empire in bondage to a corporate state (the very definition of fascism). No longer would America hold the moral high ground as a champion of freedom and human rights. Instead, in the pursuit of profit, our overlords succumbed to greed, took pleasure in inflicting pain, exported torture, and imported the machinery of war, transforming the American landscape into a battlefield, complete with military personnel, tactics and weaponry.

To our dismay, we now find ourselves scrambling for a foothold as our once rock-solid constitutional foundation crumbles beneath us. And no longer can we rely on the president, Congress, the courts, or the police to protect us from wrongdoing.

Indeed, they have come to embody all that is wrong with America.

For instance, how does a man who is relatively healthy when taken into custody by police lapse into a coma and die while under their supervision? What kind of twisted logic allows a police officer to use a police car to run down an American citizen and justifies it in the name of permissible deadly force? And what country are we living in where the police can beat, shoot, choke, taser and tackle American citizens, all with the protection of the courts?

Certainly, the Constitution’s safeguards against police abuse means nothing when government agents can crash through your door, terrorize your children, shoot your dogs, and jail you on any number of trumped of charges, and you have little say in the matter. For instance, San Diego police, responding to a domestic disturbance call on a Sunday morning, showed up at the wrong address, only to shoot the homeowner’s 6-year-old service dog in the head.

Rubbing salt in the wound, it’s often the unlucky victim of excessive police force who ends up being charged with wrongdoing. Although 16-year-old Thai Gurule was charged with resisting arrest and strangling and assaulting police officers, a circuit judge found that it was actually the three officers who unlawfully stopped, tackled, punched, kneed, tasered and yanked his hair who were at fault. Thankfully, bystander cell phone videos undermined police accounts, which were described as “works of fiction.”

Not even our children are being spared the blowback from a growing police presence. As one juvenile court judge noted in testimony to Congress, although having police on public school campuses did not make the schools any safer, it did result in large numbers of students being arrested for misdemeanors such as school fights and disorderly conduct. One 11-year-old autistic Virginia student was charged with disorderly conduct and felony assault after kicking a trashcan and resisting a police officer’s attempt to handcuff him. A 14-year-old student was tasered by police, suspended and charged with disorderly conduct, resisting arrest and trespassing after he failed to obey a teacher’s order to be the last student to exit the classroom.

There is no end to the government’s unmitigated gall in riding roughshod over the rights of the citizenry, whether in matters of excessive police powers, militarized police, domestic training drills, SWAT team raids, surveillance, property rights, overcriminalization, roadside strip searches, profit-driven fines and prison sentences, etc.

The president can now direct the military to detain, arrest and secretly execute American citizens. These are the powers of an imperial dictator, not an elected official bound by the rule of law. For the time being, Barack Obama wears the executioner’s robe, but you can rest assured that this mantle will be worn by whomever occupies the Oval Office in the future.

A representative government means nothing when the average citizen has little to no access to their elected officials, while corporate lobbyists enjoy a revolving door relationship with everyone from the President on down. Indeed, while members of Congress hardly work for the taxpayer, they work hard at being wooed by corporations, which spend more to lobby our elected representatives than we spend on their collective salaries. For that matter, getting elected is no longer the high point it used to be. As one congressman noted, for many elected officials, “Congress is no longer a destination but a journey… [to a] more lucrative job as a K Street lobbyist… It’s become routine to see members of Congress drop their seat in Congress like a hot rock when a particularly lush vacancy opens up.”

As for the courts, they have long since ceased being courts of justice. Instead, they have become courts of order, largely marching in lockstep with the government’s dictates, all the while helping to increase the largesse of government coffers. It’s called for-profit justice, and it runs the gamut of all manner of financial incentives in which the courts become cash cows for communities looking to make an extra buck. As journalist Chris Albin-Lackey details, “They deploy a crushing array of fines, court costs, and other fees to harvest revenues from minor offenders that these communities cannot or do not want to raise through taxation.” In this way, says Albin-Lackey, “A resident of Montgomery, Alabama who commits a simple noise violation faces only a $20 fine—but also a whopping $257 in court costs and user fees should they seek to have their day in court.”

As for the rest—the schools, the churches, private businesses, service providers, nonprofits and your fellow citizens—many are also marching in lockstep with the police state. This is what is commonly referred to as community policing. After all, the police can’t be everywhere. So how do you police a nation when your population outnumbers your army of soldiers? How do you carry out surveillance on a nation when there aren’t enough cameras, let alone viewers, to monitor every square inch of the country 24/7? How do you not only track but analyze the transactions, interactions and movements of every person within the United States? The answer is simpler than it seems: You persuade the citizenry to be your eyes and ears.

It’s a brilliant ploy, with the added bonus that while the citizenry remains focused on and distrustful of each other, they’re incapable of focusing on more definable threats that fall closer to home—namely, the government and its militarized police. In this way, we’re seeing a rise in the incidence of Americans being reported for growing vegetables in their front yard, keeping chickens in their back yard, letting their kids walk to the playground alone, and voicing anti-government sentiments. For example, after Shona Banda’s son defended the use of medical marijuana during a presentation at school, school officials alerted the police and social services, and the 11-year-old was interrogated, taken into custody by social workers, had his home raided by police and his mother arrested.

Now it may be that we have nothing to worry about. Perhaps the government really does have our best interests at heart. Perhaps covert domestic military training drills such as Jade Helm really are just benign exercises to make sure our military is prepared for any contingency. As the Washington Post describes the operation:

The mission is vast both geographically and strategically: Elite service members from all four branches of the U.S. military will launch an operation this summer in which they will operate covertly among the U.S. public and travel from state to state in military aircraft. Texas, Utah and a section of southern California are labeled as hostile territory, and New Mexico isn’t much friendlier.

Now I don’t believe in worrying over nothing, but it’s safe to say that the government has not exactly shown itself to be friendly in recent years, nor have its agents shown themselves to be cognizant of the fact that they are civilians who answer to the citizenry, rather than the other way around.

Whether or not the government plans to impose some form of martial law in the future remains to be seen, but there can be no denying that we’re being accustomed to life in a military state. The malls may be open for business, the baseball stadiums may be packed, and the news anchors may be twittering nonsense about the latest celebrity foofa, but those are just distractions from what is really taking place: the transformation of America into a war zone.

Indeed, what happened in Ocala, Florida, is a good metaphor for what’s happening across the country: Sheriff’s deputies, dressed in special ops uniforms and riding in an armored tank on a public road, pulled a 23-year-old man over and issued a warning violation to him after he gave them the finger. The man, Lucas Jewell, defended his actions as a free speech expression of his distaste for militarized police.

Translation: “We the people” are being hijacked on the highway by government agents with little knowledge of or regard for the Constitution, who are hyped up on the power of their badge, outfitted for war, eager for combat, and taking a joy ride—on taxpayer time and money—in a military tank that has no business being on American soil.

Rest assured, unless we slam on the brakes, this runaway tank will soon be charting a new course through terrain that bears no resemblance to land of our forefathers, where freedom meant more than just the freedom to exist and consume what the corporate powers dish out.

Rod Serling, one of my longtime heroes and the creator of The Twilight Zone, understood all too well the danger of turning a blind eye to evil in our midst, the “things that scream for a response.” As Serling warned, “if we don’t listen to that scream – and if we don’t respond to it – we may well wind up sitting amidst our own rubble, looking for the truck that hit us – or the bomb that pulverized us. Get the license number of whatever it was that destroyed the dream. And I think we will find that the vehicle was registered in our own name.”

If you haven’t managed to read the writing on the wall yet, the war has begun.