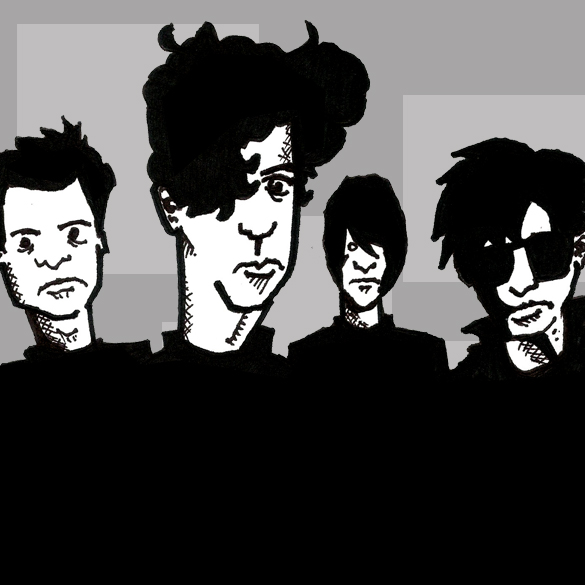 “Oh, that’s just my hearing aid,” Jim Reid slurred in response to the shrill attack of feedback that emanated from the stage in a lull between songs. It’s true that The Jesus and Mary Chain are no longer the Wayfarer-wearing Scottish troublemakers of their youth, but at the 9:30 Club, they certainly knew how to, as they say, bring the noise. Even seasoned clubgoers and fans in the back were holding their ears shut in pain, and the club might have made as much in ear plug sales as they did in alcohol that night.

This, of course, is part of the charm. I never thought I’d have the chance to see The Jesus and Mary Chain live, so plagued they’ve been by the tumultuous energies of sibling conflict, a violent reputation, and the disturbed cognitive intersection of Jack Daniels and LSD. Nevertheless, I found myself situated towards the front of an older crowd, decked in either The Jesus and Mary Chain t-shirts freshly purchased from the merch stand (doesn’t anyone tell these guys that you never wear the band t-shirt to the show?) or button-down vestiges of their software developer jobs in Arlington. Mild-manneredly sipping remarkably flimsy and small cups of Yuengling, we all toe-tapped and head-nodded through the opening bands—the Vandelles, and next the Psychic Paramount—whose fog machine reeked like a boutique candle shop but nevertheless provoked some good-natured excitement. For a band whose fans have been notoriously destructive, often showing up just for the violence and screeching feedback in the late eighties, the crowd behavior seemed to be not so much a departure from the frenzied shows of the early The Jesus and Mary Chain, but the time-driven diffusing of youthful anger into finely aged apathy.

Yet no span of decades could remove the latent violence that festers beneath the songs and shows of The Jesus and Mary Chain, stemming from their punk-inspired beginnings. The Reid brothers, Jim and William, released their first album, Psychocandy, in 1985, during the reign of synthesizer pop and neon artifice. Known for donning guitars when everyone else except the hair metal rockers were ready to abandon them, William coined a new style of playing that used a hollowbody guitar, enormous amplifier, and a variety of fuzzbox and wah pedals that were able to simultaneously create an impressive amount of melody, white noise, and angst. Influenced by the Shangri-Las and 60’s garage rock, The Jesus and Mary Chain channeled the electrical, anti-authoritarian energies of punk into a sugar-crusted bite of brick.

Today, the band boasts a larger-than-life presence via the success of bands that they’ve influenced, and is often credited for inventing the shoegaze genre. Bands they’ve made an impression on include Sister Vanilla (of which William Reid was a part), Primal Scream (original drummer Bobby Gillespie went on to found this group, known for pioneering acid house in mainstream music), the Brian Jonestown Massacre, the Dandy Warhols, the Pale Saints, the Raveonettes, and anyone since the eighties who’s ever used sonic manipulation as melodic interface.

In the beginning, the incredible sound of The Jesus and Mary Chain was accompanied by the perfect visual and narrative: two hopelessly cool and retro brothers with dark wild hair and winklepinkers who hated the shit out of each other, and often the audience they entertained. At the 9:30 Club, Jim quipped about his malfunctioning microphone—“There’s one fuck-up that’s not our fault,” he drolly mentioned, alluding to the drunken days of yore. Known for amphetamine-laced, riot-inducing shows, fans in the eighties would come out to engage in utter debauched destruction, serenaded by feverish layers of distorted guitar encasing pop confections. The band would often keep fans waiting for hours, then play twenty minutes and leave. During that short time span, Jim was infamous for falling down drunk multiple times and forgetting what songs had already been played. If the band’s albums showcased a sense of barely-contained disorder, trapped in a sonic coma, the live shows of the early days revealed what happened when that coma was broken—utter chaos.

While waiting for The Jesus and Mary Chain to go on, we ran into someone who had seen them a decade or so ago at the old 9:30 Club. He had a manic gleam in his eye as he told us there had almost been a riot when the band went on hours late and left after fifteen minutes of playing. I felt a little thrilled at the prospect of such excitement, but didn’t think that the crowd of collared shirts and beer-flecked oxfords could incite too much of anything. The clock behind the stage showed 9:30 on the dot as The Jesus and Mary Chain took to the stage, lit up by purple lights in the cold, cavernous club. We put our hands up, clapping, yet waiting.

Never really famous for a particularly tight live show, a few guitar riffs were bungled, and distortion often stood in for prowess. But that’s the formula, and it still works. The set opened with a godless amount of feedback that morphed into “Snakedriver,” bookended by Jim Reid’s highly accented and confrontational banter. Most of the songs in the set were from the band’s popular cluster of late eighties albums: Automatic, Darklands, and Honey’s Dead. Even though the band was playing the favorites, over the course of the set many of the same demure audience members that had so respectfully waited for their beloved main act were lobbing ‘fuck you’s’ and general obscenities towards Jim and William, who promptly and amusedly responded with flick-off’s in three different styles (including both American and British!) and sour put-downs. For a band whose energy has largely been characterized as hating each other, uniting against the audience seemed to be a decent progression forward in mediating conflict, even though the schtick is nothing new.

The Reid brothers have always had a strained relationship, and the rigors of touring and record label demands help to explain it. Otherwise, perhaps it’s just the result of two brothers in too close quarters, too often. Familial tension caused the split of The Jesus and Mary Chain in 1999, and it took eight years to get the band back together again for gigging. On perhaps slightly better terms, and lubricated by an on-stage Heinekin, Jim and William have been back to touring since 2007 with a drummer, another guitarist, and a bassist. Jim and William stood next to each other on the left side of the stage, seemingly so Jim could conveniently glare at his brother throughout the set. The set list was engineered so that William was not singing on any songs, even though he does lead vocals on fan-favorite albums like Darklands. When William paused to tune his guitar, which sounded suspiciously like a song riff with the sheer amount of feedback, Jim spat “he doesn’t need to tune, he’s just doing it to annoy the fuck out of me.” Regardless, William was the only band member who ever cracked a smile the entire night—and I can’t seem to remember why.

Wearing a ratty black BBC shirt and the same moppy haircut he had in the eighties, William and his enormous stack of Orange amplifiers still capably weave sheer noise and melodic infection into the band’s signature sound. His hollowbodied Gibson rested slightly to the side of his belly at an excellent angle to catch all the feedback it was generating. Jim looked sleek and coolly bored, wearing a blazer over a t-shirt with cassette tapes printed on it. He’s probably cultivated the best disinterested vocal presentation in rock and roll, oozing sex and toughness in a low voice projected out of an unmoveable face. Perhaps the most disturbing part of The Jesus and Mary Chain is how normal these men look now—they could be your co-worker, or your dad—juxtaposed with the ferocity of their sound and, in Jim’s case, stage persona. As he deadpanned the lyrics “And the world could die in pain / And I wouldn’t feel no shame / And there’s nothing holding me to blame” from the album Automatic’s “Head On,” his eyes glazed over watching us dance and clap in the crowd.

Someone kept yelling for “Vegetable Man,” an unreleased Pink Floyd song written by Syd Barrett that The Jesus and Mary Chain recorded as a b-side. The band refused to acquiesce, with Jim Reid insisting that “our cover is probably what killed ‘im.” Tellingly, Jim’s jokes and banter throughout the set were blithely realistic: “Vegetable Man” is often cited as the song that revealed Syd Barrett’s descent into drug-addled, if not induced, mental illness during the seventies, lasting till his death in 2006. Even if they didn’t play that particular b-side, there was a little “Vegetable Man” in all of us as the brains of the crowd became unhinged towards the end of the set. Maybe it was feedback. Or maybe just the sweet psychosis that The Jesus and Mary Chain create. But as the final song of the set came on, “Reverence,” a mosh pit formed as Jim vomited up the words “I wanna die just like Jesus Christ / I wanna die on a bed of spikes.” One woman barged into the mosh pit with a cocked fist, missing the skull she was targeting (perhaps out of vengence for an errant elbow) and melted into the wall of people on the other side. The crowd eventually gelled back together, the static of amplifiers gluing us together like a mucus.

We were not placated after the final song, nor were our ears reassured—in between the set end and the encore, the band left all of their amplifiers on, detonating a hellish wash of feedback. For a band so disinterested in showmanship or rock music conventions, it was slightly puzzling to experience such a by-the-book encore. However, their final songs were almost exclusively from Psychocandy, and channeled a raw energy that enthused one fan so much that he was almost kicked out of the club. The bouncer held him as he kicked around in skinny black jeans, his stringy black hair barely concealing his grinning mouth that was shouting all the lyrics that had been written at least a decade before he was born.

With the release of extensive new two-disc and dvd packages of entire The Jesus and Mary Chain back catalogue in 2011, it’s clear there’s still a lot to enjoy about the band. The remastered albums come with a thirty-two page booklet, and everything from television promos to album outtakes. You can study up in your room on this hugely influential band, at a sonic frequency of your choosing, safely away from the Reid brothers’ vitrol and volume. But that September night, as we all left the club after the show’s remarkably early end, even before eleven o’ clock, we were glad to have sacrificed our ears, and as Jim would say, “haggled” our souls to rock and roll. As everyone filtered outside onto the club’s pavement to find other bars and bodies, I went home to bask in the after-show experience of The Jesus and Mary Chain: four hours of screaming ringing in my ears. This band, in so many ways and over so many decades, is a phenomenal gift that keeps on giving.