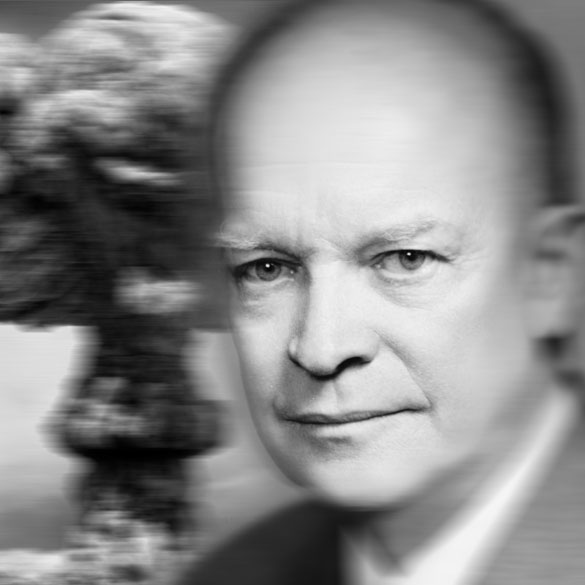 The jet plane that roars over your head costs three-quarters of a million dollars. That is more money than a man earning ten thousand dollars a year is going to make in his lifetime. What world can afford this sort of thing for long? (130)

Every gun that is made, every warship launched, every rocket fired signifies, in the final sense, a theft from those who hunger and are not fed, those who are cold and are not clothed.

This world in arms is not spending money alone. It is spending the sweat of its laborers, the genius of its scientists, the hopes of its children. The cost of one modern heavy bomber is this: a modern brick school in more than 30 cities. It is two electric power plants, each serving a town of 60,000 population. It is two fine, fully equipped hospitals.

—President Dwight Eisenhower, April 1953 after the death of Joseph Stalin 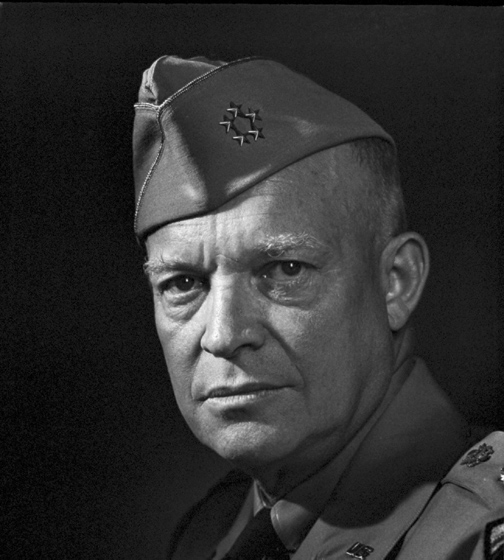 When he became President in 1953, like George Washington and Ulysses S. Grant before him, Dwight Eisenhower (“Ike”) was an unqualified War hero and a successful manager of armies. As President he had the wisdom and courage to speak the truth about and act on the dangers of the nuclear age in which we found ourselves. Adults, who were not cowboys fortunately, ran the government at that time when this reviewer and many others spent our youth in elementary school practicing hiding under our desks or in school basements awaiting the inevitable atomic Armageddon so often illustrated in episodes of Rod Serling’s TV series, the Twilight Zone. As the author here describes, in this environment of terror Ike recalibrated President Harry Truman’s containment policy to deal with a protracted Cold War and relied on three principles to keep the Peace: we should not bankrupt ourselves to finance the military (as the Soviets eventually did), we can reduce the expense of military manpower by relying on a nuclear deterrent which Eisenhower would not use foolhardily, and over time Communism could be rolled back (which did occur with the fall of the Berlin Wall). (129)

Eight years after calling military expenditures a theft from children, in his 1961 Farewell Address, the President issued a warning to more than 70 million Americans who watched him on camera. He noted that the waste and loss to humanity which he identified in 1953 now had even graver implications because of the rise of a new and unchecked “military-industrial complex” whose “total influence – economic, political, and even spiritual – is felt” everywhere. While in the rocket age the need for this development was “imperative . . . yet we must not fail to comprehend its grave implications” which reach to “the very structure of our society.”

In the councils of government we must guard against the acquisition of unwarranted influence, whether sought or unsought, by the military-industrial complex. The potential for the disastrous rise of misplaced power exists and will persist. We must never let the weight of this combination endanger our liberties or democratic processes. We should take nothing for granted. Only an alert and knowledgeable citizenry can compel the proper meshing of the huge industrial and military machinery of defense with our peaceful methods and goals, so that security and liberty may prosper together. (342-43)(emphasis added).

This insightful prophetic warning and analysis of President Eisenhower is mostly forgotten today. But journalist and author Jim Newton’s careful reading of history in this book should cause the average American to replace his image of Ike as an out of touch golfing politician and replace it with that of an astute political leader. Ike was a President who time after time stood up to his generals and refused to go to nuclear war, who also warned the nation about the dangers of ever growing military-industrial power in our political system and the theft from children which is the bloated defense budget. In this survey of a two term presidency, we also learn how the scourge to civil liberties, who was Senator Joseph McCarthy of Wisconsin, eventually was eliminated by Ike and how the role of civil rights enforcement was enhanced during this terms in office. The latter included the appointment of Earl Warren as Chief Justice of the Supreme Court, which led directly to the landmark decision in Brown v. Board of Education to fulfill the empty promise of the Fourteenth Amendment for the Black race. 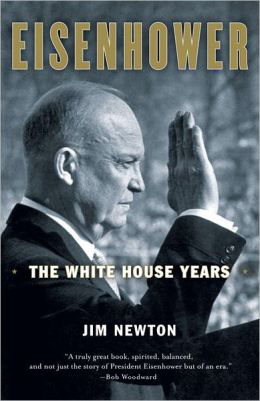 The author documents how Ike, the former top general and manager of the European and North African War, developed a sophisticated and nuanced policy on the use of nuclear weapons in the atomic age as a means to keep the peace. This required him to stand steadfast in the gap against civilian and military authority who wished to lower the threshold or trigger for authorizing the use of nuclear weapons in any confrontation with the Communists. Instead, he refused to use atomic bombs in the Korean War, or against China in that War, or in later fighting over the islands of Quemoy and Matsu off of Formosa after the Nationalist Chinese fled from the mainland. The islands had no strategic value, which he easily recognized since he could not be bluffed or fooled on military matters. Significantly, he fully recognized that nuclear war with the Soviets would be the end of civilization, and he acted accordingly to prevent atomic War. Eisenhower is quoted in one meeting which was discussing reconstructing the dollar after a nuclear war. “Wait a minute, boys. We’re not going to be reconstructing the dollar. We’re going to be grubbing for worms,” he said. On another day, contemplating the cost of an atomic war, he interjected – “You might as well go out and shoot everyone you see and then shoot yourself.” (261) In top secret meetings throughout his presidency, of which the public was never aware, he repeatedly fought and won battles in the governmental security bureaucracy which was seeking to authorize the theoretical or actual use of nuclear weapons in small wars. Successfully, to quote the author, “he insisted that the only way to preserve the peace was to make obliteration the alternative. His generals vehemently disagreed. ‘I’m the only Army general to have disassociated myself from Army thinking, “ Ike observed . . . in 1959. I have been called a traitor for this more than once.’” (266-67). The part of Brigadier General Jack Ripper, in the 1964 film Doctor Strangelove or: How I Learned to Stop Worrying and Love the Bomb, seeks to portray the military mentality of seeking nuclear war with the Communists, which Eisenhower held in check at this time.

In the area of civil rights, Ike’s predecessor as President, Harry Truman, unsuccessfully had publicly opposed the smear tactics of Senator Joseph McCarthy. So President Eisenhower instead adopted a policy of isolating and quietly exposing him to the American public, to the ultimate protection of liberty, like the freedom of association. As a result of McCarthyism, supposedly unfit books by authors such as Jean-Paul Sartre and John Dewey were removed from libraries in U.S. embassies abroad and even burned. Mirroring a policy of ignoring McCarthy, and gradually isolating him, in his 1953 commencement address at Dartmouth College Ike departed from his text and added – “Don’t join the book burners . . . Don’t think you are going to conceal faults by concealing evidence that they ever existed. Don’t be afraid to go in your library and read every book as long as any document does not offend your sense of decency. That should be the only censorship.” (125) When beloved comedian Lucille Ball was accused of being a card carrying Communist, Ike and Mamie invited her and her husband Desi Arnez to a White House dinner and they even sat next to them for the meal. Eisenhower also encouraged the Senate to televise the McCarthy hearings which eventually taught the Country what McCarthy really was, an un-American demigod. The author here notes that the President had no legal authority to silence an independently elected official. So he “refused to name him publicly but shared his disgust with captains of industry and newspaper publishers, members of his staff and Congress, academic leaders and foundation presidents . . . [and by not] allowing any doubt about his own abhorrence of the senator, Ike quietly cut off McCarthy from sources of support.” (154) The Senator then did himself in during the televised hearings where the general public observed his true nature. Consequently, within two years “McCarthy and his crusade already seemed a joke.”

Eisenhower is often criticized for a lack of success in being in the forefront of the modern civil rights movement, and the appointment of Earl Warren as Chief Justice is just looked on as a quirk of fate. But here again the author paints a fuller and more informed picture of Ike’s record in this area. After the administration initially failed to pass the first Civil Rights Act in Congress since Reconstruction, a noteworthy effort in itself, in 1955 fourteen year old Emmett Till was bludgeoned and shot to death and his body dumped in the Tallahatchie River. Of course, the alleged murderers in this crime of racial hatred were acquitted by a Southern jury, as had been happening since Ulysses Grant stepped down as president in 1877. Absent federal power to prosecute such a racial crime, the Eisenhower Justice Department tried again to get that power from Congress. It also sought to enforce minority voting rights in the South more fully and to expand the Civil Rights section of Justice into a full division. As a result of his boldness on the racial justice front, Eisenhower then had to fight the full power of the Southern racist Senate establishment. In the end he came out with at least half a loaf when a civil rights Bill did pass. Senators Richard Russell, Strom Thurmond and others were powerfully entrenched to protect a century of Southern racism in blocking an effective Bill and wounded it by granting the right to trial by a jury of Southern peers in such trials, which was the problem to start. Southern racists simply would not criminally convict Southern murders of Blacks. Perhaps the South then thought it had the President on the run when the governor of Arkansas incited the people of Little Rock to violently prevent the enrollment of Black students in their public school. The Klan, the White Citizens’ Council and hundreds of white men and women boldly attacked any Black in sight and the hapless students. They had no defenders at all since the governor had withdrawn National Guard protection for them. The mayor of Little Rock then cabled Eisenhower for help pleading – “The immediate need for federal troops is urgent . . . Mob is armed . . . situation is out of control . . . In the interests of humanity law and order . . . provide the necessary federal troops within several hours.” (250) In 1957 Ike then sent in the 101st Airborne to protect little children from Southern racists and addressed the nation from the Oval Office. The rest is exciting history, and the growing civil rights movement was advanced further.

Jim Newton has written a lucid and engaging portrait of many hidden aspects of the presidency of Dwight Eisenhower which causes a needed reassessment of Ike in the mind of the general public. A wartime hero, he also was a courageous and informed defender of the peace in the atomic age and a protector of many civil liberties.