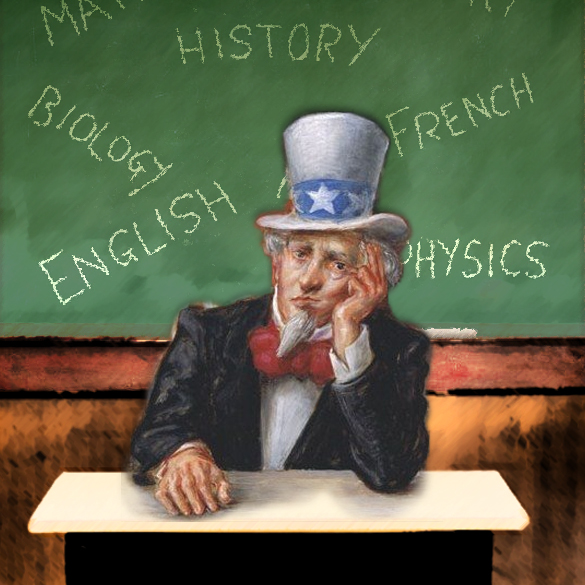 Bill O’Reilly has discovered that Americans are ignorant “about their own country.” He told us so not too long ago, quoting Newsweek for the numbers, though he could just as easily have quoted some of Jay Leno’s man-in-the-street interviews (it turns out that 29% of Americans don’t know who the vice president is and 40% don’t know that Germany and Japan were the enemies in World War II). And Bill knows who to blame too: First, the public school system, which is “no longer teaching history, geography and civics in an effective way.” Next, the Internet, which allows people to detach themselves from reality. Television too, but that doesn’t apply to Fox viewers, who obviously take an interest in current events. There you have it, in a nutshell.

Well, Bill, you are absolutely right. The public school system, first and foremost, is responsible for the ignorance of Americans, but neither you nor your critics understand why. You think they are not teaching the right subjects. I believe you also think that not being able to fire incompetent teachers because of their loathsome unions is also part of the problem. Some people think money or smaller classes will do the trick. Some people think it’s the fault of the kids.

The first thing that should be noted is that it isn’t just history, geography and civics that Americans are ignorant about. It’s everything. And they always have been. That means science, mathematics, literature, art, music, foreign languages, their own language, basic grammar, simple arithmetic, you name it. And the schools are definitely to blame, but not in the way that Bill O’Reilly thinks.

The simple fact of the matter is that children do not learn what the public school system wishes them to learn because school bores them. and it is not their fault either. A four- or five-year-old child wants to know everything. He will drive people crazy with his endless questions. After a year or two in the school system he doesn’t want to know anything and will tell anyone within hearing distance that he “hates” reading, composition, arithmetic, science, social studies, whatever – hates school in fact. Within this year or two the public school system has in effect managed to destroy the natural curiosity of the child. The child is no longer eager to learn. Being taught in a school is actually the kiss of death for any subject taught there, guaranteeing that the child will develop a lifelong aversion to it. Are the teachers bad? Not at all. What is the problem then?

The problem is very simply the way these subjects are taught – frontally, or, more precisely, confrontationally, in rigidly structured frameworks where teachers hammer away at the captive child until his head is ready to explode. (Canetti expressed this very well in Crowds and Power: “Those most beset by commands are children. It is a miracle that they do not collapse under the burden of commands laid upon them by their parents and teachers. That they in turn, and in an equally cruel form, should give identical commands to their children is as natural as mastication or speech.”) Why subjects are taught in this inappropriate way, completely unattuned to the capacity and temperament of the child, is not very hard to discover; it is to be sought in fact in Bill O’Reilly’s own Church, for until not so long ago, historically speaking, nearly all teachers in the West were churchmen. The view of the Church that as a consequence of Original Sin all men are born evil and must therefore be coerced into doing what is good produced schools that made study a burden and created in the child an aversion to the learning process that persists to this day in these same rigid frameworks. The challenge of an educational system is to make the learning process interesting to the child, not to make the child sit still. This it has not thought to do and does not even know how to do.

The only way to teach schoolchildren is to feed their natural curiosity. This requires innovative teaching methods so far removed from today’s classroom atmosphere that they would be unrecognizable to today’s pedagogues. Some will argue that modern educational systems do their job by supplying society with its elites, but this is of course an illusion. All that is proven by the emergence of elites is that the public schools cannot destroy them, for elites take care of themselves, possessing the talent and ambition to survive the system. As for the nonelite population – say, 80% of students – they are of course shortchanged and consequently turn out to be ignoramuses, just as Bill O’Reilly has discovered. There is after all no reason why the man in the street should not read poetry, listen to symphonies, visit museums, or take an interest in science and history. American education makes sure he won’t, through no fault of his own, for he certainly has the capacity to learn (as anyone knows who has ever listened to middle-aged poolroom bums talking about the history of baseball, for example). It is not enough to teach the right subjects to children. They must be taught imaginatively.

Fred Russell is the pen name of an American-born writer living in Israel. His novel Rafi’s World (Fomite Press) has just been published (Feb. 2014) and his stories and essays have appeared in Third Coast, Polluto, Fiction on the Web, Wilderness House Literary Review, Ontologica, Unlikely Stories: Episode 4, etc.