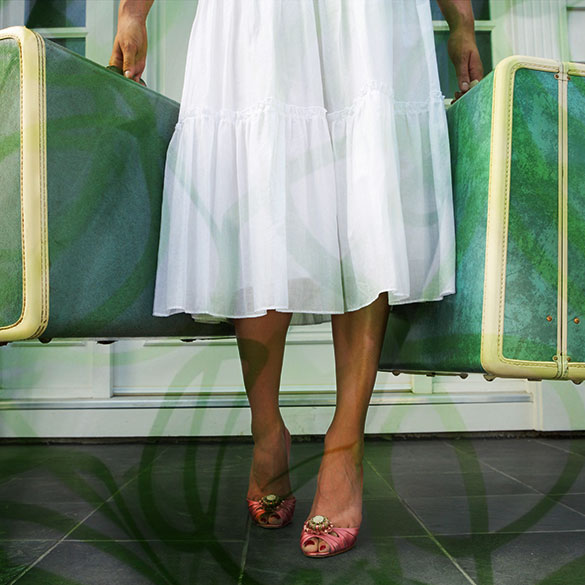 I watched her as she packed. She was constantly on the move; packing and unpacking was an art to her. Her hands moved swiftly and confidently as she arranged her books in her black simple suitcase; the way they moved was final and absolute.

She was off to somewhere else again – I have forgotten where. She had already moved twice this week.

“When will I see you?” I asked her again.

“Of course, if you don’t quit again.”

“You don’t have to be an asshole.”

This is when tears fell on my cheeks. I didn’t feel sad or anything. She stared at me with resentment. Her unkind eyes enraged me; my tears evolved into indignant sobs.

She was now placing her clothes on the top of her books.

“You always look as if… you’re taking everything.”

I wish she would give me something – a hairpin, something like that – and look me in the eye and say, “See, take this hairpin. I’m not taking this with me. You can look at it and make sure a part of me is still here,” but she never did such reassuring meaningless things. When she would leave, she would leave behind the smell of her hair on her pillow across the room. I never told her, but when she was not here, I used to lie on her bed and smell her pillow.

But then the next morning her pillow smelled like my sweat.

Sometimes I didn’t remove her hair from the surfaces of our home.

She zipped her suitcase and looked at me. “Goodbye,” she said quietly.

She did not come to kiss or shake hands. She turned and left.

I remained motionlessly on my bed for some time, and then I moved to the window and looked out into the moist half-lit morning, which smelled like wet soil. I saw her moving away, walking on the damp pavements, and maneuvering to avoid the small pools of water formed in the irregularities of the asphalt. I wished she would turn away and wave a hand, or if not that, just look. She didn’t know. She walked fast and with bent shoulders, as if she couldn’t wait to get out of the neighborhood.

I went downstairs and sat beside dad. He spoke to no one in particular. He was speaking in his own mother language, one he had never taught us. He ceased to speak English when he developed Alzheimer’s. Only mum could understand what he was talking about. He talked to his old friends. Some of them were killed during a revolution; some were killed during a war. Some were scattered all around the world. He sometimes cried as he spoke to these friends. Sometimes he shouted angrily. But they were not there to know it, and we did not know who they were. He never talked about them. My dad had started remembering his old pals as soon as he had started to forget everything else.

I left my dad to his alien reminiscence and went back to our room which was a painful place to go back to. I resisted the urge to call her. She was gone just a minute. What would I have to say even if I did call her?

I called my friend and classmate. The only sound I heard was the inhuman inharmonious beeping. No one picked up. I was relieved. I had discovered that I was in no mood to chat.

I remembered a friend who told me that she had once discovered that her man was cheating on her. She had walked out in anger and had told him that he’d never see her again. As she was walking out of the neighborhood, she realized that she had left her mother’s heirloom behind. This was a particularly invaluable heirloom, one her grandmother, a gypsy Holocaust survivor, had given to her mother. She reluctantly went back and tried so hard to ring his bell again, but she did not dare. She walked across to a café, where they used to date a lot. She wept over a coffee she never drank, and finally, she stayed the night with a friend. He had kissed her on the right side of her mouth and had caressed her hair carefully. His indifferent affection caused her to cry again. “Do you miss Harry?” her friend asked. She realized that yes, she did miss him. She loved him and would continue loving him. She left not only her Holocaust relic at his home but also her heart.

But it meant nothing now. She told me this two years after it happened. Pride is a funny thing—how it blocks the way between you and your loved ones and your family heirlooms. And now everything is distant and alien. That heirloom means nothing more than a museum artifact now. I wonder what the boy did with it. Maybe he kept it. Maybe to him it signified not the Holocaust but a girlfriend he missed.

Ali Nazifpour lives in Iran and was born on the tenth anniversary of the Islamic Revolution. He has an MA in English literature and works for Shahid Beheshti University. This is his first story.