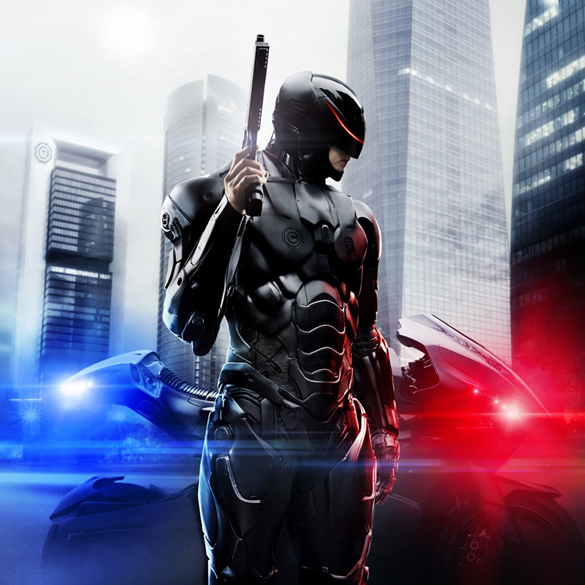 Just as we witnessed neighborhood cops being transformed into soldier cops, we’re about to see them shapeshift once again, this time into robocops, complete with robotic exoskeletons, super-vision contact lenses, computer-linked visors, and mind-reading helmets.

Similarly, just as military equipment created for the battlefield has been deployed on American soil against American citizens, we’re about to see military technology employed here at home in a manner sure to annihilate what’s left of our privacy and Fourth Amendment rights.

For instance, with the flick of a switch (and often without your even being aware of the interference), police can now shut down your cell phone, scan your body for “suspicious” items as you walk down the street, test the air in your car for alcohol vapors as you drive down the street, identify you at a glance and run a background check on you for outstanding warrants, piggyback on your surveillance devices to listen in on your conversations and “see” what you see on your private cameras, and track your car’s movements via a GPS-enabled dart.

That doesn’t even begin to scrape the surface of what’s coming down the pike, with law enforcement and military agencies boasting technologies so advanced as to render everything up until now mere child’s play.

Once these technologies, which used to belong exclusively to the realm of futuristic sci-fi films, have been unleashed on an unsuspecting American public, it will completely change the face of American policing and, in the process, transform the landscape of what we used to call our freedoms.

It doesn’t even matter that these technologies can be put to beneficial uses. As we’ve learned the hard way, once the government gets involved, it’s only a matter of time before the harm outweighs the benefits.

Imagine, if you will, self-guided “smart” bullets that can track their target as it moves, solar-powered airships that provide persistent wide-area surveillance and tracking of ground “targets,” a grenade launcher that can deliver 14 flash-bang grenade rounds, invisible tanks that can blend into their surroundings and masquerade as a snow bank or a soccer mom’s station wagon, and a guided mortar weapon that can target someone up to 12 miles away.

Or what about “less lethal weapons” such as the speech jammer gun, which can render a target tongue-tied; sticky foam guns, which shoot foam that hardens on contact, immobilizing the victim; and shock wave generators, which use the shockwaves from a controlled explosion to knock people over.

Now imagine trying to defend yourself against such devices, which are incapable of distinguishing between an enemy combatant and a civilian. For that matter, imagine attempting to defend yourself or your loved ones against police officers made superhuman thanks to technology that renders them bullet-proof, shatter-proof, all-seeing, all-knowing and all-powerful.

Does rendering a government agent superhuman make them inhuman, as well, unable to relate to the mass of humanity they are sworn to protect and defend?

Pointing out that the clothes people wear can affect how they act, Salon magazine reporter Geordie Mcruer notes that “when clothing has symbolic meaning – such as a uniform that is worn only by a certain profession – it prepares the mind for the pursuit of goals that are consistent with the symbolic meaning of the clothing.”

When we dress our police officers in camouflage before deploying them to a peaceful protest, the result will be police who think more like soldiers. This likely includes heightening their perception of physical threats, and increasing the likelihood that they react to those threats with violence. Simply put, dressing police up like soldiers potentially changes how they see a situation, changing protesters into enemy combatants, rather than what they are: civilians exercising their democratic rights…

When police wear soldiers’ clothing, and hold soldiers’ weapons, it primes them to think and act like soldiers. Furthermore, clothing that conceals their identity – such as the helmets, gas masks, goggles, body armor and riot shields that are now standard-issue for officers at peaceful protests – will increase the likelihood that officers react aggressively to the situation. As a result of the fact that they are also dressed like soldiers, they are more likely to interpret the situation as hostile and will more readily identify violence as the best solution.

While robocops are problematic enough, the problem we’re facing is so much greater than technology-enhanced domestic soldiers.

As I make clear in my book A Government of Wolves: The Emerging American Police State, we’re on the cusp of a major paradigm shift from fascism disguised as a democracy into a technocratic surveillance society in which there are no citizens, only targets. We’re all targets now, to be scanned, surveilled, tracked and treated like blips on a screen.

What’s taking place in Maryland right now is a perfect example of this shift. With Congress’ approval and generous funding (and without the consensus of area residents), the Army has just launched two massive, billion dollar surveillance airships into the skies over Baltimore, each airship three times the size of a Goodyear blimp, ostensibly to defend against cruise missile attacks. Government officials claim the surveillance blimps, which provide highly detailed radar imaging within a 340-mile radius, are not presently being used to track individuals or carry out surveillance against citizens, but it’s only a matter of time before that becomes par for the course.

In New York, police will soon start employing mobile scanners that allow them to scan people on the street in order to detect any hidden objects under their clothes, whether it be a gun, a knife or anything else that appears “suspicious.” The scanners will also let them carry out enhanced data collection in the field—fingerprints, iris scans, facial mapping—which will build the government’s biometric database that much faster. These scanners are a more mobile version of the low radiation X-ray vans used to scan the contents of passing cars.

Google Glass, being considered for use by officers, would allow police to access computer databases, as well as run background checks on and record anyone in their line of sight.

One program, funded by $160 million in asset forfeiture funds, would equip police officers and vehicles with biometric smartphones that can scan individuals’ fingerprints and cross check it against criminal databases. The devices will also contain real–time 911 data, warrant information from federal, state and city databases, photographs of missing persons, suspects, Crime Stoppers posters and other persons of interest, and the latest cache of information on terror suspects.

Stand-off lasers can detect alcohol vapors in a moving car. “If alcohol vapors are detected in the car, a message with a photo of the car including its license plate is sent to a police officer waiting down the road. Then, the police officer stops the car and checks for signs of alcohol using conventional tests.”

Ekin Patrol cameras, described as “the first truly intelligent patrol unit in the world,” can not only detect the speed of passing cars but can generate tickets instantaneously, recognize and store the license plates of stopped, moving or parked vehicles, measure traffic density and violation data and engage in facial recognition of drivers and passengers.

Collectively, all of these gizmos, gadgets and surveillance devices render us not just suspects in a surveillance state but also inmates in an electronic concentration camp. As journalist Lynn Stuart Parramore notes:

The Information Age … has turned out rather differently than many expected. Instead of information made available for us, the key feature seems to be information collected about us. Rather of granting us anonymity and privacy with which to explore a world of facts and data, our own data is relentlessly and continually collected and monitored. The wondrous things that were supposed to make our lives easier—mobile devices, gmail, Skype, GPS, and Facebook—have become tools to track us, for whatever purposes the trackers decide. We have been happily shopping for the bars to our own prisons, one product at a time.

Unfortunately, eager as we are for progress and ill-suited to consider the moral and spiritual ramifications of our planned obsolescence, we have yet to truly fathom what it means to live in an environment in which we are always on red alert, always under observation, and always having our actions measured, judged and found wanting under some law or other intrusive government regulation.

There are those who are not at all worried about this impending future, certain that they have nothing to hide. Rest assured, soon we will all have nowhere to hide from the prying eyes of a government bound and determined to not only know everything about us—where we go, what we do, what we say, what we read, what we keep in our pockets, how much money we have on us, how we spend that money, who we know, what we eat and drink, and where we are at any given moment—but prepared to use that information against us, whenever it becomes convenient and profitable to do so.

Making the case that we’re being transformed as citizens, neighbors and human beings, Parramore identifies six factors arising from a society in which surveillance becomes the norm: a shift in power dynamics, in which the “watcher” becomes all-seeing and all-powerful; an incentive to turn citizens into outlaws by criminalizing otherwise lawful activities; diminished citizenship; an environment of suspicion and paranoia; a divided society comprised of the watchers and the watched; and “a society of edgy, unhappy beings whose sense of themselves is chronically diminished.”

As Parramore rightly concludes, this is “not exactly a recipe for Utopia.”