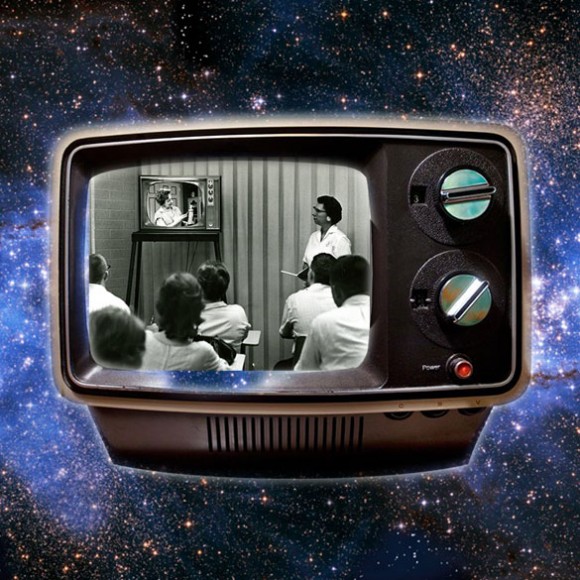 The television set was black.  The remote rested in the teacher’s hand.  The project was simple.  The students went to work, and most of the footage shown was humorous.  Some of it was stupid.  Nobody would remember it.  They would only remember her.

She had walked down the hallway with the boy and girl.  The girl called the shots.  The heavy camera rested on her shoulder.  The boy was eager, awaiting direction, and she poked her head into the passing classrooms, looking for the perfect spot.  They finally stopped before an open door to a packed class, and the teacher kept his back to them, writing on the chalkboard.  It was time to go to work.

The teacher pressed the red button.  She stepped back, crossing her arms across her chest.  Her nervous gaze fell upon the one before her, not trusting the other two assigned to work with her.  At first, nothing happened.  Then, the boy and her began to argue.  He then took off his belt.

The television set exploded into darkness.  The remote dropped onto a desk.  All eyes were on her.  Comments of great acting flickered through the air, but none met the concern now shining in the teacher’s eyes for she knew better.  But she was smiling, enjoying the attention her peers were giving her, and ignoring the blinding concern that her teacher now showered her in.

The bell rung.  The teacher grabbed her by the arm, keeping her behind the class.  Everyone else left.  The boy and girl paused for a moment, wondering if they were in trouble, but she was still smiling.  That was their cue to go and not worry, but they should be worried.  They should be very worried, if the teacher had her way.

“It’s okay,” she said as she pulled away from the teacher.  “I’m a cool kid now,” and she left the classroom, the teacher, and that awful video behind.

Melissa R. Mendelson has been working for the State of New York for the last five years.  She is also a published short story author and poet.  Her poetry has been included in Names in a Jar: A Collection of Poetry by 100 American Poets (Amazon, 2007).  Her short story, Whispers in the Night, has been included in Espresso Fiction: A Collection of Flash Fiction for the Average Joe (Amazon, 2012).