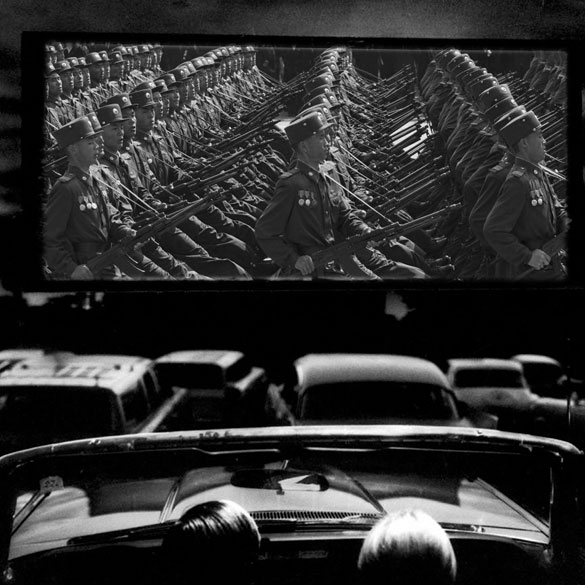 However much a government interferes with the lives of its population it seems to never try to dictate the expression of art from its creative citizens.  Over the centuries and throughout the world art has been the one medium in which people could express their concerns, hopes and dreams without political intrusion.  The early and mid 20th century created a small blip, with its wars and political posturing oppressive governments used the medium and emerging film technology to instigate government controlled art and film propaganda to construct notions of statehood and patriotism in a time of conflict.  The most apparent examples were the socialist realism that emerged from the former Soviet Union and its sphere of influence and of course Hitler’s Germany.  At present when governments try to interfere with the production of films within their own country they are target of bitter criticsism by the artistic community.  For example in 2011 British Prime Minister David Cameron suggested that the UK film industry produce more ‘commercial’ and ‘rewarding’ films in the same vein as The Queen (2006) or The Kings Speech (2010) that could turn a profit and also promote a grand appearance of The United Kingdom to the world.  The backlash came from far and wide with British filmmakers such as Ridley Scott and Hollywood veteran Robert Redford denouncing Cameron’s narrow and capitalist view of artistic expression. In most modern societies artistic expression is required to be isolated from the establishment so that it can freely comment, analyse and criticise it.  There is however still one place left in the world that dictates the production of art and film, that place is the Democratic People’s Republic of Korea (DPRK), or as its often known to the outside world North Korea.  North Korea’s leadership has for decades put the needs of its own social revolution and outward appearance before that of individual artistic endeavour. This has meant that the film and artistic output of North Korea directly corresponds with the leadership’s outdated socialist ideology that it peddles to its citizens and the world.

To understand the restrictive nature of filmmaking and art in North Korea, we must first understand the ideology that informs the nation.  Every aspect of daily life in North Korea is to serve the leadership and the country’s own official Juche ideology.  A rudimentary version of the Juche ideology was created in the late fifties and early sixties at a time when North Korea’s economic and social structure was fairly strong, at least compared to its southern neighbour.  The Party Leadership required an ideology similar in socialist values to that of Marxism, Stalinism and Maoism, as the country was founded on the military assistance of both Chairman Mao and Stalin.  The Juche ideology is credited to the country’s eternal president Kim Il-Sung, however it was his son Kim Jong-Il that pulled the loose threads of the ideology together and adapted the theory to all aspects of life and living conditions.  In the early seventies Juche became official doctrine of the county, replacing any remains of the communist Isms. To an outsider of North Korea (and some might argue even an insider) the Juche ideology is virtually impenetrable.  Reading any North Korean communiqué is comparable to being bludgeoned over the head with a mighty hammer and sickle.  The basic premise from the Juche ideology is this:

1)      The people must have independence in thought and politics, economic self-sufficiency, and self-reliance in defence.

2)      Policy must reflect the will and aspirations of the masses and employ them fully in revolution and construction.

3)      Methods of revolution and construction must be suitable to the situation of the country.

4)      The most important work of revolution and construction is moulding people ideologically as communists and mobilizing them to constructive action.

These four points are in terrible contradiction to the reality of North Korea today, where no freedom in political thought exists and where policy certainly does not reflect the “will and aspirations” of the masses, when internal policy that serves to maintain power of the leading elite has crippled the economy and left most the population starving, homeless and reliant on food and medical aid from NGO’s.

Hypothetically speaking making a film in North Korea would be equally a frustrating and liberating prospect.  The Juche doctrine on filmmaking that Kim Jong-Il authored in 1987 titled The Cinema and Directing is a manifesto for filmmakers that deeply imbeds the ideology into every aspect of the creative process with militant use of language.   The first chapter of the book: ‘The Director is the Commander of the Creative Group’ sets the tone.  The idea proposed in this chapter is that the director holds the creative vision and flair, but cannot accomplish his vision without the creative group, therefore the production team becomes akin to a military unit, working together in harmony and equality with each other.  It is somewhat refreshing to read praise for the lowest production member who goes unnoticed in so many mainstream Western productions; “Since the film is made through the joint efforts and wisdom of many people, every participant in the production should fulfil their role and responsibility like the master he is.”  (Kim 1987, 7).  In comparison to the Hollywood system the use of solidarity and comradeship is nonexistent in the age of egotistical and dictatorial directors such as Titanic and Avatar director James Cameron.   In fact the egotists of Hollywood could learn something from this manifesto in sharing and exploring their creative vision with others:

In analysing and considering a production the director should not be too egotistical.  Every artist has his own creative individuality and may have different views on a production.  If the director does not take this into account and holds his own views and ignores the opinions of other creative workers, it will be difficult to establish a uniform view on a production (Kim 1987, 10).

The strength of the new system lies in the fact that it guarantees the solid unity and cohesion of the creative group based on the Juche idea and gives full play to the awareness and credibility of all the members and the director’s guidance goes deep into the creative work and life so as to bring about an uninterrupted flow of innovation (ibid, 9)

The text appears to offer incredible creative freedom for the production group, from the director to the key grip there is a sense of artistic duty to perform, but in reality this is an illusion.  All of North Korea’s film output is designed solely as propaganda that glorifies the leadership, the nation and the doctrine of Juche.  No film or art can criticise or comment negatively on the hardships faced by the Korean people throughout the past decades nor condemn the military or leadership.  All film production must adhere to the Juche ideology and as point four above clearly states must mould its viewers ideologically as communists.

The basic duty of the creative group is to make revolutionary films of high ideological and artistic value, which make an effective contribution to arming people fully with the Party’s monolithic ideology… (ibid, 9)

In other words nothing contained within the film can go off message from the Party line.

The ideological kernel of a production is the seed which the director and all the other creative workers should bring into flower through their collective efforts and wisdom…Therefore, the director should be very careful that none of the creative team loses the seed or introduces anything which has nothing to do with it. (ibid, 12)

One only assumes that the ‘seed’ to which Kim Jong-Il is encouraging the film crew to bring to flower is the Juche ideology itself.

There are many admirable aspects of The Cinema and Directing. It would appear that Kim Jong-Il would have perhaps been more comfortable in the director’s chair as opposed to the dictators’ throne.  Without the nonsensical Juche popping up in virtually every paragraph, and the constant reminders that the film is for revolutionary purposes, the text almost serves as an ideal and practical film production manual.  Certainly the aspect of comradeship and equality within the production unit is in itself revolutionary. Mainstream film production systems throughout the world, but especially in Hollywood, rely on the artistic vision and execution of the director.  In North Korea the director is simply the leader of the unit and the film’s production is a collective endeavour.

There might be evidence to suggest that the new leadership in North Korea is loosening its grip on the arts or at least allowing outside influence to modernise the dated narratives of so many North Korean Films.  In 2012 a joint British-Belgian-North Korean production titled Comrade Kim Goes Flying premiered at the Toronto Film Festival.  The film follows the exploits of a young girl as she attempts to leave her mundane life as a coalminer and work in the circus as a trapeze artist.  The film is certainly at odds with past North Korean films in that it features a strong female protagonist, a first for North Korean cinema, and is in effect a romantic comedy.  The doctrine of Kim Jong-Il’s The Cinema and Directing is not at all apparent nor is the current leadership’s reestablishment of the Juche ideology.   Comrade Kim Goes Flying may not change the situation in North Korea, but it points to a future in which art can be free from governmental control and fall into the hands of the people.  When it does the freedom of expression that will follow will be hard to suppress.

One Response to How to Make a Film in North Korea