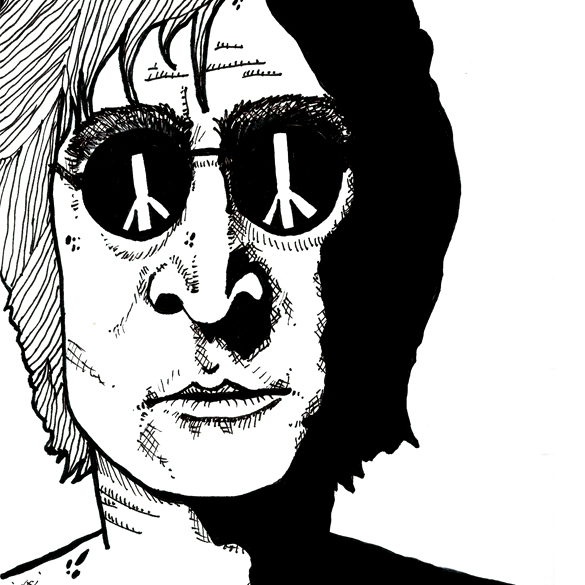 “All we are saying is give peace a chance.”—John Lennon

Despite the moving tributes that were paid to John Lennon’s lyrical vision of a world without war, racial or religious divisions or hunger at the conclusion of the 2012 Summer Olympics in London, there’s really very little real talk of peace anymore.

You don’t hear much about peace from the various talking heads whose mindless chatter keeps us distracted from the ongoing wars that are bleeding us dry (the Afghanistan war just marked its 11th anniversary on Oct. 7, 2012, making it the longest war in U.S. history).

And you certainly don’t hear much about peace from the current crop of musical and cultural icons making headlines today—whether it be teen heart throbs such as Justin Bieber or screen heart throbs such as George Clooney—whose activities seem more geared at cultivating their celebrity status and advancing party politics than promoting peace.

It may be that John Lennon, born 72 years ago on October 9, 1940, was the last great iconic anti-war activist of our age. Thrust into the spotlight as a member of the Beatles—and what an incredible spotlight it was, with the world at their feet—it didn’t take long for Lennon to recognize that he could use his celebrity status to not only communicate his own ideas about the world but change the way people thought about issues of the day. As Time magazine contributor Martin Lewis noted in his remembrance of Lennon on the 20th anniversary of his death: “John Lennon was not God. But he earned the love and admiration of his generation by creating a huge body of work that inspired and led. The appreciation for him deepened because he then instinctively decided to use his celebrity as a bully pulpit for causes greater than his own enrichment or self-aggrandizement.”

Lennon’s interests were as varied as the musical styles he sampled throughout his 20-year music career. They ranged from distrust of authority (seen in “Working Class Hero”), politics (“Gimme Some Truth”) and literature (“I Am the Walrus”) to spirituality (“Across the Universe”) and Primal Scream Therapy (“Mother”), and he immortalized all of them in song. Yet paramount among the causes to which Lennon was committed was his almost single-minded devotion to the anti-war movement, which moved to the forefront in the wake of his 1969 marriage to avant-garde artist Yoko Ono.

Starting with their infamous “Bed-Ins for Peace,” Lennon and Ono turned the tables on the paparazzi that dogged their every move in order to stage their own unique anti-war “happening.” It was an inspired tactic on the duo’s part, and one that has never been successfully repeated by any other celebrity of note since then. Using their honeymoon at the Amsterdam Hilton in March 1969 as a launch pad for their anti-war efforts, the Lennons invited the worldwide media to join them in their hotel suite, where they sat in bed for two weeks straight, from nine in the morning to nine at night, engaging in discussions about world peace. A second Bed-In followed three months later in Montreal, where Lennon wrote and recorded what was to become the unofficial refrain of the peace movement—“Give Peace a Chance.”

What we’re really doing is sending out a message to the world, mainly to the youth, especially the youth or anybody, really, that’s interested in protesting for peace or protesting against any forms of violence… There’s many ways of protest, and this is one of them. And anybody could grow their hair for peace or give up a week of their holiday for peace or sit in a bag for peace. Protest against peace, anyway, but peacefully, because we think that peace is only got by peaceful methods, and to fight the establishment with their own weapons is no good, because they always win, and they have been winning for thousands of years. They know how to play the game violence, and it’s easier for them when they can recognize you and shoot you.

By October 1969, “Give Peace a Chance” had become a universal chant at anti-Vietnam War demonstrations. On November 15, during a peace rally in Washington, DC, the legendary folk singer Pete Seeger led nearly half a million demonstrators in singing “Give Peace a Chance” at the Washington Monument. Asked what he thought about that day, Lennon later remarked, “I saw pictures of that Washington demonstration on British TV, with all those people singing it, forever and not stopping. It was one of the biggest moments of my life.”

Following the Bed-Ins, Lennon and Ono became even more activist-minded, lending their support to the plight of the working class by way of a shipbuilders’ work-in, railing against the Vietnam War, voicing their discontent over the brutal murders of 14 unarmed civil rights protesters in Northern Ireland (memorialized in “Luck of the Irish” and “Sunday Bloody Sunday”), bemoaning the death toll from the uprising at Attica Prison, and holding forth with leading American peace activists of the day such as Jerry Rubin and Abbie Hoffman—all the while, using music as the medium for their message. Released in October 1971, Lennon’s Imagine album would become his musical calling card for world peace.

In December 1971, Lennon appeared at a benefit concert in Ann Arbor, Michigan, for peace activist John Sinclair, who had been arrested in 1969 for selling two joints to an undercover policewoman and was sentenced to ten years in prison (hence the lyric “They gave him ten for two” in Lennon’s song “John Sinclair”). The day before the concert, the Michigan Supreme Court denied Sinclair’s appeal. By this point, Sinclair had been in prison for two and a half years. The rally, which was broadcast live, drew 15,000 attendees, who gathered to hear Lennon perform. The next day, the Michigan Supreme Court reversed its decision, and Sinclair was set free.

Writing for Time, Martin Lewis concludes, “Of all Lennon’s legacies, one of the most enduring, and perhaps the most impressive, is who his enemies were. The true measure of his greatness was that in the 1970s he terrified the most powerful man in the world.” While it’s open for debate whether Lennon had more enduring legacies than inspiring terror in government operatives, there is no doubt that for a little while, at least, he became enemy number one in the eyes of the U.S. government. This resulted in a four-year campaign of surveillance and harassment by the U.S. government—spearheaded by J. Edgar Hoover, an attempt by President Richard Nixon to have him “neutralized” and deported, and an FBI file more than 400-pages deep.

Right up until his death on December 8, 1980, at the hands of an assassin, Lennon remained true to the anti-war activism that had shaped much of his life. The same, unfortunately, cannot be said for the nation he came to call home. According to the latest report by the Institute for Economics and Peace, the U.S. spends $2.16 trillion annually on violence containment—that is, anything related to inflicting, preventing or dealing with the consequences of violence. This includes everything from costs associated with national defense and law enforcement to prisons, counterterrorism and border control. That’s a lot of money—roughly one out of every seven dollars spent per year or $7,000 per American taxpayer annually—to not only administer violence, war and killing but deal with the after-effects of them, as well.

Put another way, the amount we spend—15% of the U.S. economy—to administer and contain violence annually equals the United Kingdom’s entire economic output. That same money, if most of it were channeled into more productive avenues such as education and health care would reduce unemployment by 13%.