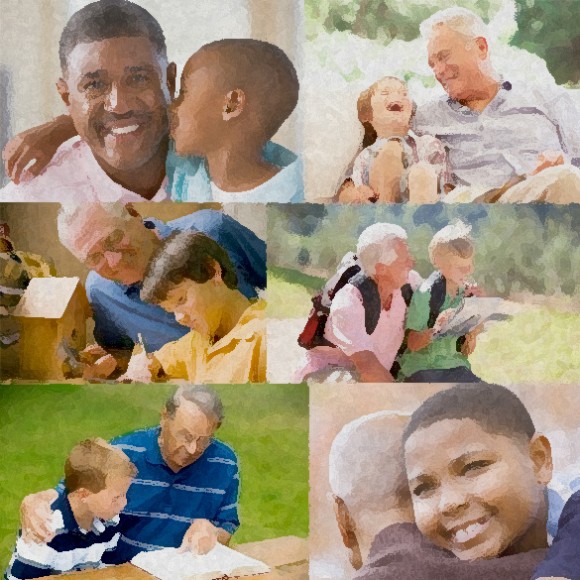 I lost one of the sweetest, loving, most caring men that has ever walked the earth this past week. He passed away last Thursday night and he meant the world to me, more than just what a Grandfather would be mean to a boy.

Lawrence Kay was the only male child on his side of the family. His mother had all girls besides him, his sister had all girls, their daughters had all girls, even he and my Grandmother had all girls. But then, one day in 1987, he was told I would be the first grandson. You might as well have told him that he was having a son. From that day forward my grandfather quit smoking, from what I have been told, cleaned up his act even a little more, and the day I was born was a day I started receiving unconditional love from someone who never got to give it to his own son. However, I became his son very quickly.

I am going to skip a lot of time for this post because I spent more time with my granddaddy than any other grandchild did. We all loved him and cherished him, but there was just something else to it when I was a younger child. I knew he loved me more than what was possible to show. Later on in my life, him and my grandmother showed me without a doubt when they let me live with them for many, many years.

My parents and I didn’t get along at all when I was a late teen, and before I could even graduate high school completely, I had already found myself staying out at my grandparents’ house. After graduation and more family conflict, I had moved in with Lawrence and Karen, my grandparents. I’ll never forget getting up in the early days to the smell of breakfast and my grandfather piddling in the yard. I would take off the garbage in OUR truck (as he called it). My grandfather never let me feel unloved. It didn’t matter if I was the biggest disappointment in the world, he didn’t show it.

Time went by and he got sicker. He stayed in the bed a lot more at that point. I remember every morning tip toeing into the bathroom for my shower trying not to wake him up, and every time I opened the door to come out he would roll over and say, “What are you doing pal?” He just loved me so much…there was not a sweeter man…

I lived with them consistently for 3 or 4 years and was in and out all the way up until 2013, and for a few weeks last year. At that point, he really wasn’t getting out of the bed that much at all anymore. I would wake up, no breakfast smells in the morning, grandmother just cooked it when it was obvious that he would actually get up and eat, and that could have possibly been late afternoon. I would get ready and walk into his room. I would pet him and he would wake up and grin. We would talk briefly about what I was going to do that day, I would ask him how he felt (which somehow was always great), I would tell him I love him, and then it was off about my day.

I was told a few weeks ago that he might not have much longer. We didn’t know how long, but with him trying to be strong all the time, it was very hard to tell if he had improved or if he wanted you to think he had. He fought all the way to the end. I visited him the week before he passed way, and he appeared to be alert, we talked about my work. We talked about how he felt, and about my precious little son who is his first great-grandson. I talked to him about the house next door that I used to live in as a kid, and then my poor man got really tired. He was so uncomfortable in his body. I told him I loved him and let him get some rest.

I got another phone call a few days later saying the same thing, but hospice this time was running out of things to do for him. He had an untreatable fever for his condition, his body was shaky, he was in and out of consciousness it seemed. I pulled a stool beside his bed and held his hand for thirty minutes, rubbing his head trying to comfort him. I felt his body relax, and just softly spoke to him for a little while. I told him I love him, and that I appreciated him so much. He just squeezed my hand a little tighter. He seemed to doze off not much later, so I left the room shortly after.

Thursday afternoon I got a phone call at my office, which is about 45 minutes away, saying this was it. The death rattle had started to settle into his breathing, and he was in and out of it because his body because it could no longer support him anymore. I left the office a few hours early and raced to my grandparents’ house. I wasted no time and walked straight back to his bedroom where all of the family was. My grandmother sat in the place I had the week before, holding his hand. He was flanked by his daughters on each side of the bed. My brother was there and my cousin Tia, and some of my grandmothers distant cousins. And then it happened. It seemed as soon as he heard my voice or realized I was there, he started on his way out. I didn’t know how to process it, I didn’t know what to do. I put my hand on his leg and watched my grandfather try to struggle to stay in his body with us. I couldn’t get the words out of my mouth, “It’s okay, just go granddaddy…” but it was pretty loud in my head with them. My grandmother consoled him with those words, though, and my mother pet his head and said the same. The only words I got out of my mouth before I thought he couldn’t hear us anymore were, “I love you, Granddaddy.” Not one minute later, his body let go. His nerves let loose, his pineal gland went off, and we watched my grandfather pass into the afterlife.

There are some moments that you will never forget in your life. Like the time that granddaddy cut most of the fingers on one his hands off using a table saw, and I got him to the hospital in ten minutes out of a normal thirty minute drive to Floyd Hospital to save all those fingers. I couldn’t help but seeing him in his casket, with his hands crossed fingers intact. I smiled a little because you could never tell he lost any of them.

Or the time I slid his truck off the road and he didn’t get mad at me at all, he just found out where I was at, got a bigger truck and came and pulled me out.

Or all the times he came to my school for Grandfathers day and helped upkeep my school and hung out with the other grandfathers.

Or all the times that we just sat in the den at his house and ate cheese, pickles, sandwiches, and watched westerns.

I will also never forget watching that sweet, humble man pass back into the heart of God. He is not suffering anymore. He is encapsulated in the true love of the universe, and I long for the day that I can hug my best pal again. I love you, Granddaddy.

Benjamin Kay is a writer, music producer, composer, artist, and Renaissance man. You can find links to his blog, music and musings at his Official Website: BenjaminKmusic.com.