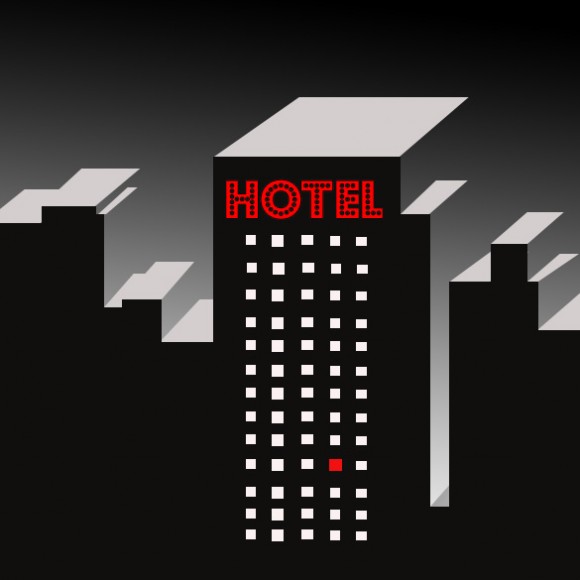 So it got me thinking of other establishments that run in the same infamous vein as the Chelsea, and when thinking of other hotels of notoriety the first one that popped into my head was The Watergate in Washington D.C.

The hotel shot to international infamy on June 17, 1972 when a group of men were discovered trying to wiretap the Democratic headquarters located on the 6th floor. The murky details led all the way to the oval office under Richard Nixon and the rest, as they say, is history.

While the Watergate scandal signalled the death of Nixon’s presidency, the Cadogan Hotel in London saw the demise of Oscar Wilde’s career.

On April 6, 1895 Wilde was in suite number 118 when police arrived to arrest and charge him with ‘committing acts of gross indecency with other males.’

Wilde also left his mark in a Parisian hotel where, in exile after his release from prison, he stayed in room 16 at Hotel d’Alsace, now known as L’Hotel.

Wilde was a broken man both spiritually and financially by the time he took to his death bed in Hotel d’Alsace at the age of 46 but, he managed to carry his wit to the bitter end when his final words were said to have been; ‘Either that wallpaper goes or I do!’

Another playwright who died in a hotel was Tennessee Williams. Although he didn’t die in a French hotel, Williams departed this world from a French-named establishment in New York City.

In 1983 while living in the sunset suite of Hotel Elysee, Tennessee Williams choked on a bottle cap from his varied collection of prescription drugs.

Dying in a hotel room seems to be a familiar story in the world of celebrity. Famous deaths in hotels also morbidly gifts notoriety to the establishment.

Janis Joplin finished her life in the Highland Gardens Hotel in Los Angeles in 1970. Known back then as the Landmark Motor Hotel, Joplin was found dead in room 105 at the age of 27 from a heroin overdose.

Not all deaths occurred in hotel suites; one death in a hotel occurred in the hotel’s barber shop.

In 1957, the gangster Albert Anastasia paid a visit to the Park Central hotel in New York for a hair cut in its barber shop. As he sat in the barber’s chair waiting for his hair cut, an assassin entered and showered him with bullets.

Another gangster of another era also met a bloody end in the same hotel. In 1928 Arnold Rothstein was shot dead while playing cards in one of the hotel’s rooms.

In 1949 Billie Holiday was busted for drugs possession in The Mark Twain Hotel in San Francisco when federal agents raided he room. Today you can stay in the same room, now aptly named the Billie Holiday Room.

In 1973 out in the wild landscape of Joshua Tree California, Gram Parsons checked into room 8 of the Joshua Tree Inn but never checked out. He overdosed on a mixture of cocaine, heroin and tequila at the age of 26 and a few days later as his body was being prepared for a flight to Louisiana, Parsons manager took a hearse and stole the coffin containing the body from LAX. He drove it out to Joshua Tree where according to Parson’s final wishes the coffin was burned in the desert.

Back in L.A, The Hacienda Motel played host to the death of soul singer Sam Cooke in 1964. Cooke met a night club singer and brought her back to his room where a fight between the pair broke out. The woman ran from the room with Cooke running after her. Thinking she had fled to the manager’s office Cooke broke down the door to get in, but the manager shot him three times thinking the soul singer was a robber.

During the ‘60s and ‘70s laying waste to hotels became something of a hobby for rock stars, but one such rocker took it to the extremes.

Keith Moon, drummer for The Who, caused mayhem at every hotel he checked into, but the Holiday Inn in Flint, Michigan is where he caused legendary damage.

To celebrate his 21st birthday in August 1967 Moon ran amok in the hotel. It started with a large birthday cake that Moon decided to throw over his guests, thus starting a food fight that spread across the hotel complex. Fire extinguishers were set off and cherry bombs were thrown into a number of toilets. Moon decided to strip naked as the police arrived, and he took to the wheel of a Lincoln Continental to reverse it into the hotel swimming pool. He tried to evade arrest by jumping out of the pool but he slipped on some cake and knocked out a tooth. When police finally caught a hold of Moon they took him to the dentist first and then on to jail where he spent the night.

The next morning Moon flew off to Philadelphia, where The Who were scheduled to play, leaving behind a $24,000 bill for damages at the Holiday Inn. The Holiday Inn chain slapped the band with a lifetime ban from its hotels across the United States.

The Who weren’t the only British rock band to put an otherwise seemingly mundane hotel on the map.

In the Summer of 1969 Led Zeppelin checked into the Edgewater Inn in Seattle where guests could fish from the Puget Sound out of their windows. A red-haired groupie found herself willingly tied to a bed in one of the bands rooms while they fished and caught a red snapper from the waters below. What followed is daubed in a mixture of myth and fact.

The fish was supposedly used on the groupie in a sexual manner that can only be blurred between lines of fact and fiction. Even though the Beatles stayed there in their famous 1964 American visit, the hotel will forever be associated with the antics of Led Zeppelin, who found themselves banned from the establishment after the incident with the red-haired groupie and the red snapper.

The infamous Chateau Marmont in Los Angeles runs parallel with New York’s Chelsea hotel when it comes to notoriety.

The bolt hole on Sunset Boulevard has been a favourite of actors and musicians for decades. James Dean jumped in through an open window there to get into auditions for Rebel Without a Cause while John Belushi died there in 1982 when he checked into bungalow 3 and overdosed on a speedball. But of course, the most notorious hotel of them all is the Chelsea, whose walls abound with stories of excess and death.

In 1978 Sid Vicious of the Sex Pistols was sharing room 100 with his girlfriend Nancy Spungen. She was found dead there from multiple stab wounds said to be inflicted on her by Sid.

In 1953 Welsh poet Dylan Thomas was staying there while pursuing a drinking binge. He fell into a coma at the hotel and was removed to St Vincent’s Hospital where he died some days later.

A decade later the author of The Lost Weekend, Charles R Jackson, committed suicide in his room while staying at the Chelsea in 1968.

The Chelsea tended to draw such self-destructive individuals, but it also attracted great minds such as Arthur C Clarke who wrote 2001: A Space Odyssey while staying there.

Perhaps the Chelsea Hotel is not the worst when it comes to notoriety, but then again perhaps it is. What is true to say about the old hotel is that it is a place and a time that might never be repeated again. So sing on, Mr. Cohen, I remember you well in the Chelsea hotel…

Lily Murphy is a freelance writer from Cork city, Ireland.