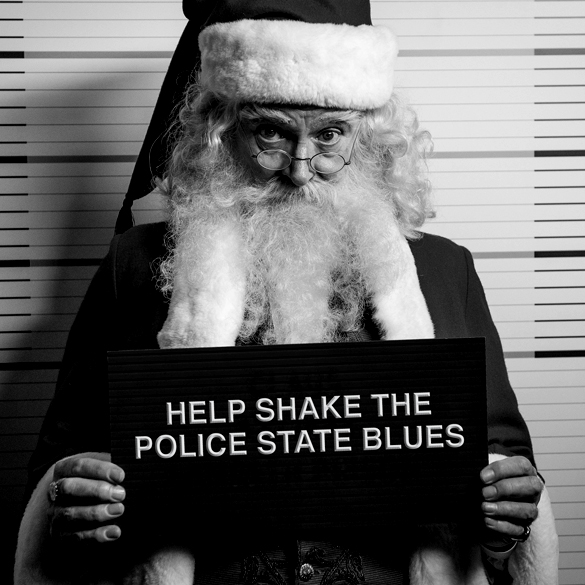 What a turbulent year it’s been.

As I point out in my book Battlefield America: The War on the American People, we’ve been held up, stripped down, faked out, photographed, frisked, fracked, hacked, tracked, cracked, intercepted, accessed, spied on, zapped, mapped, searched, shot at, tasered, tortured, tackled, trussed up, tricked, lied to, labeled, libeled, leered at, shoved aside, saddled with debt not of our own making, sold a bill of goods about national security, tuned out by those representing us, tossed aside, and taken to the cleaners.

After endless months of being mired in gloom and doom, we now find ourselves just a few weeks away from Christmas, struggling to latch onto that spirit of joy, excitement, innocence, magic and hope we had as children. Even so, it takes a monumental effort to get past the Grinches and Scrooges who can you make you feel like yours is anything but a wonderful life.

And then there’s Christmas itself, which has become embattled in recent years, co-opted by rampant commercialism, straight-jacketed by political correctness, and denuded of so much of its loveliness, holiness and mystery.

Move beyond the “us” vs. “them” mentality. Tune into what’s happening in your family, in your community and your world, and get active. Show compassion to those in need, be kind to those around you, forgive those who have wronged you, and teach your children to do the same. Stop acting entitled and start being empowered. Learn tolerance in the true sense of the word. Value your family. Feed the hungry, shelter the homeless and comfort the lonely and broken-hearted. Give peace a chance.

And finally, turn off the news, settle down with your loved ones, and turn on a Christmas movie that reinforces your faith in humanity. Unfortunately, Christmas movies made in the last few years seem to express a cynicism and weariness that have become hallmarks of our materialistic culture. The season for giving has turned into the season for getting. However, there is still magic to be found in some of the classic Christmas movies, along with a few newer ones that are quickly joining their ranks. The following are ten of my favorites to help get you through the season with maximum joy.

It’s A Wonderful Life (1946). An American classic about a despondent man, George Bailey (James Stewart), who is saved from suicide by an angel working to get his wings. Stewart and Donna Reed are sublime. Henry Travers, Lionel Barrymore and Thomas Mitchell are fine in support. This film is a testament to director Frank Capra’s faith in people. Fine performances by James Stewart and Donna Reed.

The Bishop’s Wife (1947). An angel (Cary Grant) comes to earth in answer to a bishop’s (David Niven) prayer for help. The two male leads and Loretta Young help energize this tale of lost visions and longings of the heart. Monty Woolley and Elsa Lanchester are superb in supporting roles. Look for Karolyn Grimes, who plays the bishop’s daughter. She was also Zuzu (of Zuzu’s petals) in It’s A Wonderful Life.

Miracle on 34th Street (1947). By happenchance, Kris Kringle (Edmund Gwenn) is hired as Santa Claus by Macy’s Department Store in New York City for the Thanksgiving Day Parade. Before long, Kringle, who believes himself to be the one and only Santa Claus, has impacted virtually everyone around him. Funny, witty and heartwarming, this film is stocked with some fine performances from Maureen O’Hara, John Payne and young Natalie Wood. Gwenn won the Academy Award for best supporting actor for his role as Saint Nick.

A Christmas Carol (1951). Also known as Scrooge, this is the best film version of the penny-pinching Scrooge’s journey to spiritual enlightenment by way of visits from supernatural visitors. Alastair Sim as Scrooge gives one of the finest film performances never to win an Oscar. Bill Murray’s Scrooged (1988) is a good modern film adaptation of this Charles Dickens tale.

A Christmas Story (1983). Ralphie (Peter Billingsley) is a young boy obsessed with one thing and only one thing: how to get a Red Ryder BB-gun for Christmas. Ralphie’s parents are wary, and his mother continually warns him that “you’ll shoot your eye out.” Based on Jean Shepherd’s autobiographical book In God We Trust, All Others Pay Cash, this comedy has some classic scenes—such as a department store Santa who is more demonic than saintly. However, Bob Clark’s adept direction never loses the focus of the story—the yearnings of a child for the magic of Christmas morning. A great cast, which includes Darren McGavin, Melinda Dillon and a voice-over narrative by Shepherd himself.

One Magic Christmas (1985). If you grew up in a family where times were tough, this film is for you. A guardian angel (Harry Dean Stanton) comes to earth to help a disillusioned woman (Mary Steenburgen), who hates Christmas. This, of course, poses serious problems for her husband and two children who groove on the yuletide. This tale of redemption and second chances is a delight to watch. And Harry Dean Stanton, even though he plays against type, is excellent as a weird, offbeat angel.

Prancer (1989). This story of an eight-year-old girl (Rebecca Harrell) who believes that an injured reindeer in her barn is actually one of Santa’s reindeer is one of the most down-to-earth Christmas films ever made. It shows how the love of an individual, even if it’s a little girl, can change not only other hearts but the course of historical events. Sam Elliott and Cloris Leachman are fine in supporting roles, but Rebecca Harrell is excellent. Filmed on location in freezing, snowy weather, this film is a treat for those who love Christmas.

Home Alone (1990). Eight-year-old Kevin (Macaulay Culkin) is accidentally left alone at home in a Chicago suburb when his parents, siblings and assorted relatives fly to Paris for Christmas.  Good riddance—or so Kevin thinks until he runs into all kinds of problems, including two burglars played by Joe Pesci and Daniel Stern. Written by John Hughes, the story centers on the importance of family relationships.

Elf (2003). Will Ferrell is marvelous as Buddy. As a baby, Buddy snuck into Santa’s bag and wound up at the North Pole, where he was raised as an oversized elf. From there, he begins a journey back to the “real” world to find and establish a relationship with his father. This film has it all—Santa, elves, family problems, humor, emotion and above all else, a large dose of the Christmas spirit. One of the best Christmas movies ever made.

Get Santa (2014). This British film is a rare gem among the paltry holiday films to come out in recent years. Santa, played by Jim Broadbent, has crashed while test-driving a new sleigh and turns to fresh-out-of-prison ex-con Steve and his 9-year-old son Tom to save Christmas. The film has enough heart and Christmas magic to touch the most determined Unbeliever, and then for laughs, tosses in some farting reindeer, a jailbreak, a car chase, and a trip to the North Pole.

As these films illustrate, it is possible to move beyond the self-centered, materialistic, cynical world that imprisons us—a materialistic world that has our young people growing jaded and skeptical—and reclaim the loving, giving, magical spirit of Christmas.

More than a century ago, the editor of The New York Sun addressed this growing cynicism in his response to a letter from 8-year-old Virginia O’Hanlon, whose friends had told her there is no Santa Claus. This was his answer.

VIRGINIA, your little friends are wrong. They have been affected by the skepticism of a skeptical age. They do not believe except [what] they see. They think that nothing can be which is not comprehensible by their little minds. All minds, Virginia, whether they be men’s or children’s, are little. In this great universe of ours man is a mere insect, an ant, in his intellect, as compared with the boundless world about him, as measured by the intelligence capable of grasping the whole of truth and knowledge.

Yes, VIRGINIA, there is a Santa Claus. He exists as certainly as love and generosity and devotion exist, and you know that they abound and give to your life its highest beauty and joy. Alas! how dreary would be the world if there were no Santa Claus… There would be no childlike faith then, no poetry, no romance to make tolerable this existence. We should have no enjoyment, except in sense and sight. The eternal light with which childhood fills the world would be extinguished.

Not believe in Santa Claus! You might as well not believe in fairies. You might get your papa to hire men to watch in all the chimneys on Christmas Eve to catch Santa Claus, but even if you did not see Santa Claus coming down, what would that prove? Nobody sees Santa Claus, but that is no sign that there is no Santa Claus. The most real things in the world are those that neither children nor men can see. Did you ever see fairies dancing on the lawn? Of course not, but that’s no proof that they are not there. Nobody can conceive or imagine all the wonders there are unseen and unseeable in the world.

You tear apart the baby’s rattle and see what makes the noise inside, but there is a veil covering the unseen world which not the strongest man, nor even the united strength of all the strongest men that ever lived, could tear apart. Only faith, fancy, poetry, love, romance, can push aside that curtain and view and picture the supernal beauty and glory beyond. Is it all real? Ah, Virginia, in all this world there is nothing else real and abiding.