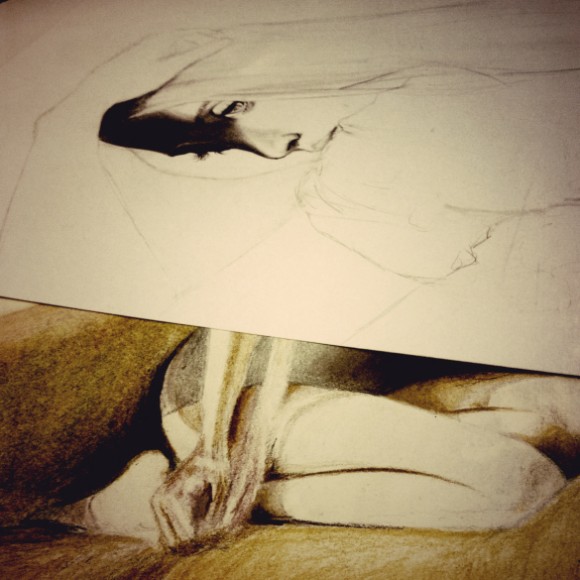 Other guys drew cartoon characters with huge, floppy genitals or whatever model of car they wanted even more than the hottest cheerleader. The whole hour of detention, however, I drew Mrs. Simpson. The bitch of it was, I knew I’d have to draw the whole picture over again because all I had was a No. 2 pencil and a sheet of lined notebook paper. Coach Elliott didn’t allow me to bring my sketchpad or charcoal pencils into the portable building where all the delinquents waited for the clock to strike four. I’d convinced myself if I didn’t finish the picture in time, I’d never finish. I always made stupid rules for myself. I believed them at the time, but then I broke them and forgot why I believed them in the first place.

The building smelled like stale bubblegum. Chester sat next to me, picking at the blackheads on his forearm. The fucker had big-ass arms. My friend mentioned catching him at the Anytime Fitness down the highway from school. She said Chester was pumping iron with a demonic look in his eyes, like he was punishing himself. I was in okay shape. I didn’t really think about that shit. Vanessa liked me all right, and Natalie had her eye on me, I could tell. It was kinda fucked up that a junior college drone like Natalie would scope me out, but it’s good to keep your options open. One day Vanessa might realize my ship was doomed to sink.

The stench in the portable was about to knock me out. Three minutes till freedom. I shaded the part of Mrs. Simpson’s neck right below her jaw. Finished, I held the picture as far back as my arms allowed. Frankie whispered that it looked just like that art teacher bitch. I shuddered and kicked myself for accidentally showing her my hard work. Frankie was too damn much. I mumbled my thanks and slipped the drawing inside my world history textbook. There was a test on Monday. I don’t know why I had the book with me. I didn’t really believe in studying. Coach Elliott slammed his palm on the desk and ordered us home. I shoved everything into my satchel and scurried out the door. I knew the kids trapped with me, but didn’t feel like talking.

I didn’t ask what Gary had done while I sat in detention. He let me borrow his car a couple of days a week. I think he was trying to grow big enough balls to ask if he could suck my dick. Don’t get me wrong, I have no problem with fags. A couple of years ago, when I started high school, I thought I might be one myself. Fucking a guy sounded so forbidden, more exciting than poking yet another pussy, but I never tested my curiosity. Gary waved while I was still halfway across the parking lot from his neon green Nova with the busted right taillight. He’d probably been waiting like a jilted bride for fuck knows how long. When I reached him, I asked if he was bored. He laughed and told me about all the losers he saw getting into their cars. I tried to resist, but it was no use. I dug the drawing of Mrs. Simpson from my satchel. Gary clucked his tongue, praised how much it looked like her. He asked why I was so determined to draw every bitch on the faculty. I shrugged.

“People our age have boring faces,” I said.

Fridays sucked for one principle reason: I had to go deep into downtown Tyler to meet with my probation officer. We lived in a little town seven miles south of there. I had no reason to be nervous. I’d quit weed since it stayed in your system so long and focused on six-packs of Keystone during the weekends, the occasional snorts of coke before first period or before my mother got home in the afternoon. I was grateful Gary agreed to take me to Mr. Feldman’s office. Gary was a decent guy. We met through theatre classes. I’d still be the villain in Arsenic and Old Lace if I hadn’t flunked Algebra, English, and Biology. Stupid fucking UIL rules. Gary was short and thin with a kind face and shaggy copper-colored hair that tickled his collar. He always laughed too long after my jokes.

Downtown, Gary found a slot across from the fire station. Parking in that part of Tyler was a bitch. I had to hoof it four whole blocks to the twelve-story cinderblock building where all my fellow fuck-ups had their lives dictated by underpaid, frustrated bureaucrats. Natalie liked to teach me words most guys my age wouldn’t know, like bureaucrat. ‘Girls like a smart guy,’ she always said.

On the tenth floor, I waited for Mr. Feldman to call me back. Sometimes I waited thirty minutes before the bastard popped his hairless head through the doorway and chirped my last name, like I was a private in the Army. To kill time, I leafed through a pamphlet for Alcoholics Anonymous. This one featured a twenty-question quiz that promised to prove if you were a booze-hound. Total fraud. I bet half the fuckers in my homeroom would flunk. I’d heard AA was a Jesus cult.

Mr. Feldman asked about my grades. Since my guidance counselor sent him my report cards as a condition of my probation, I couldn’t lie. I told him about the three classes I’d failed. He tilted his head to the side to express his concern. He asked if I had ADHD or some other learning problem. I had personality conflicts with my teachers, I muttered, and he laughed like I was goddamn hilarious. He reminded me I had to complete five hours of community service before the month’s end. He asked if there was anything else he needed to know. I hated that question. Probation wasn’t my idea; I didn’t know what to report. I wanted to tell him how great my new drawing had turned out, but I’d be totally humiliated if he actually gave a shit. When I returned to the car, Gary smiled and asked if I needed bail. I didn’t laugh.

I flicked my cigarette ash out the window as Gary turned onto the street where he lived with his Republican parents and slut sister. This was our arrangement: if I needed the car, I could drive it from his place as long as I returned the next morning to pick him up for school. Since it was Friday, I didn’t know how long I could keep it. He might’ve needed it back Saturday morning or he might have let me jet around town till Monday. After Gary pulled into his driveway, he collected his books, and hopped outside. I rounded the car and slid behind the wheel.

“Try not to get pussy on my upholstery,” he said and laughed.

That poor bastard, always trying to convince me he wasn’t a fag. His gums were starting to recede. I told him if he wanted it back before Monday, he’d have to suck me off. He jerked away from the car, looking stricken. I was kidding, I said. Maybe it was bound to happen, some Friday night after a twelve-pack of beer and a joint: me and Gary. He didn’t respond, just gave a weak wave, like he was having a stroke.

Vanessa had the house to herself till six. She played the mascot at school. The only reason I bothered with those lame pep rallies was to watch her pump her fists and urge the crowd to cheer while decked out like a damn bulldog. The first time she wore the costume, she almost passed out from the heat. We each had two shots of whiskey from her parents’ stash before we dashed inside her bedroom to fuck. It surprised me how I was still into her. We’d been getting together at least five months, maybe six. She wasn’t my official girlfriend or anything. Even losers like me knew girls like Vanessa weren’t really dating material.

I loved the way she could cram my whole dick in her mouth, her lips reaching my pubic bone. I loved the way she rode me and shuddered each time I rolled my hips. I loved how she smelled like the Hallmark store in the mall. After I came, Vanessa swung her leg over my body and landed onto the floor with the grace of a gymnast. Still naked, she stopped at her dresser and gazed into the mirror. She brushed her long ash-blonde hair. She always did five strokes on one side then swished her hair to the other shoulder and gave it another five strokes. Rinse and repeat. I told her she had a great body. That got her attention. She glanced over her shoulder and said that was nice but then asked why I’d say that now. After all, we were done fucking. She was a little heavy, but all her parts were in fine proportion. She could’ve hosted an infomercial on how to make extra weight look good. I tried to smile and told her that I complimented her body because it was true. She looked like she wanted me to keep talking. Vanessa and I had an understanding, though. She asked if I wanted another shot of whiskey.

The joint Vanessa and I shared after fucking left me giddy and relaxed as I drove back into town. She lived far out in the sticks while my parents lived on one of the shorter blocks of a subdivision called Clear Springs nestled behind the elementary school. Growing up, my mom used to walk me to the school’s front door every damn day, rain or shine. I missed that. When I walked through the back door, hoping to avoid her, our dog Peaches went apeshit and started barking like I was table scraps. Seconds later, my mom appeared in the doorway. She still wore her turquoise velour workout suit. Ever since Anytime Fitness opened its doors, the whole town had been trying to outdo one another.

“I don’t approve of you cruising around in some boy’s car,” she said. “You’re not even sixteen.” I reminded her my birthday was only a month away and told her I’d be in my room till dinner. She puckered her lips and squinted at me as if a fogged glass stood between us. Moments after I closed my door, I heard a newscaster announcing how many were injured in a pile-up on the interstate north of Tyler.

Thomas Kearnes holds an MA in Screenwriting from the University of Texas at Austin. His two collections are “Pretend I’m Not Here” (Musa Publishing) and “Promiscuous” (JMS Publishing). His fiction has appeared in Litro, The Adroit Journal, The Ampersand Review, PANK, Word Riot, Eclectica, SmokeLong Quarterly, Johnny America, Five Quarterly, wigleaf, Storyglossia, Sundog Lit, A cappella Zoo, Spork, The Pedestal, Digital Americana Magazine and elsewhere. His work has also appeared in several LGBT venues. He is studying to become a drug dependency counselor. He lives near Houston.