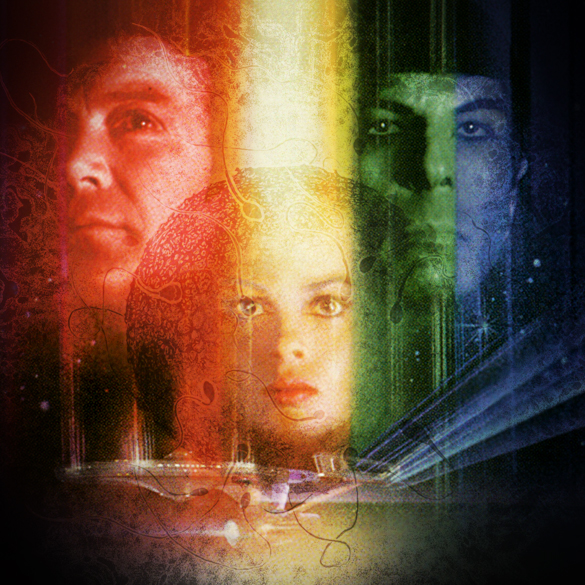 A step back to the late sixties, and the troublesome trio of Captain Kirk, Spock and Doctor McCoy ruled the space lanes and left a galactic trail of fist fights, flaming ships, broken hearts and sarcastic quips. With the return of Star Trek: The Motion Picture, a more sober, older and wiser crew boarded the Starship Enterprise; and instead of threats from the staple Star Trek villains the Romulans or Klingons, this voyage was an existential journey that had more in common aesthetically with Stanley Kubrick’s 2001: A Space Odyssey (1968).

The wafer thin premise is this: a monolithic vessel surrounded by dense clouds is on an intercept course to Earth. In its wake it leaves a path of destruction, and with its intentions unknown, Starfleet command sends a freshly built Enterprise to try and engage the phenomenon. The Enterprise crew discovers that at the centre of the vessel is a Voyager 6 Earth probe that has, over the centuries, become sentient and received countless upgrades from aliens unknown. Voyager’s (now referred to as V’ger) mission is to return all the data it has gathered to its creator, mankind.

What is striking about Star Trek: The Motion Picture is that its apparent lack of action and driving narrative creates a hidden subtext that suggests an emotional attachment or strong sexual arousal towards machinery. As strange as this might sound, the film is full of what can only be described as spaceship and technology pornography. Slow crawling pan shots of the enterprise exterior and close-ups of the Enterprise’s bulkheads and engines are accompanied by rousing orchestral music. At one point whilst the ship is cradled in space dock, a dozen tiny figures hover over the ship in white spacesuits, making last minute repairs to the immense hull. The scene is meant to illustrate how enormous and overbearing the vessel is, and this obviously works, but one can’t help draw inferences to images of microscopic male sperm trying to infiltrate the female egg. This scene of soft-core money shots of the Enterprise is intercut with Captain Kirk and engineer Scotty approaching in a space shuttle to rendezvous with the Enterprise. Both men look equally nervous and excited, akin to how two peeping schoolboys might react as they catch their first sight of female breasts through a keyhole. The two men twitch and shuffle, offering each other knowing glances and toothy smiles. The object of their excitement is not female however, but a sexless machine, a concise and flawless construction of cylinders and wires, bulkheads and facets. Although its crew always refers to the Enterprise as a ‘she’, the ship is anything but female. It is in fact a personalised male play-toy. The Enterprise is the ultimate extension of the male appendage: the Porsche or Ferrari of the space age.

Away from the sexualisation of the vessel, the character of Navigation Officer, llia, throws up a man/machine sexual dilemma, which ultimately becomes the catalyst of the movie. She joins the ship at space dock to the excitement of the crewmembers and, in particular, handsome First Officer Willard Decker, a former love interest of llia. llia is a member of the Delton species, a highly exotic and sexually open society. Delton’s emit potent pheromones that provoke strong sexual attraction in other species. When she boards the ship, she announces to Kirk and the bridge crew that her vow of celibacy has been put on record, which one assumes is some sort of Delton cultural requirement in order to serve aboard a Starfleet vessel. Although still clearly attracted to one another, llia and Decker remain professional; that is, until a probe from V’ger invades the Enterprise and abducts llia. When she reappears, she is in fact not llia but an android recreation, sent to record and observe the Enterprise crew and learn of their intentions. She has been stripped of her emotions (and her clothing) and is nothing more than a machine within; even her voice has been distorted to emit a hard clipped tone. Although having none of llia’s memories or experiences, the android llia somehow retains its base feelings towards Decker, and he too is still physically attracted to the android representation of Ilia, although it shares no personality traits with its former incarnation. When the Enterprise transverses the cloud that surrounds the massive ship, they see that at its centre is the space probe Voyager 6, a reconnaissance probe launched from Earth hundreds of years previously. In response to V’ger’s intention to merge with its creator, Decker offers himself as the human element that will complete V’gers desire and save Earth from the destructive force of the cloud. He joins with Ilia; they kiss, and a shock of white light merges their bodies into a new life force that vanishes from sight. This appears to be the ultimate convergence of machine and man, both consenting, to join harmoniously.

Despite its dour tone and plodding narrative, Star Trek: The Motion Picture began a re-emergence of interest in all things Star Trek. The subsequent decades saw the release of a further ten films and the launch of four successful television spin-offs including Star Trek: The Next Generation. The subtext that emerges in The Motion Picture is explored to great lengths in TNG by the character of Lieutenant Commander Data, an android with a Pinocchio complex, who wishes to explore human emotions and relationships. It only took until episode three of the first season of TNG for the dilemma of man and machine to emerge. In The Naked Now (broadcast 5 October 1987) the crew of the new Enterprise are infected with a strange pathogen that eliminates their inhibitions. This pathogen also affects Lieutenant Commander Data. He is seduced by Lieutenant Tasha Yar, the ships security officer, who asks the forward question of whether he is “fully functional,” to which he replies that he is “programmed in multiple techniques, a broad variety of pleasuring,” ultimately leading them to engage in sexual intercourse. Data’s desire to become human begins with wanting to partake in sexual interaction, as if this is the ultimate step in realising his goals (becoming a man). Data and V’ger share a similar goal of becoming something more than the sum of their mechanical parts; they desire humanity, which they believe will be attained through sexual or emotional engagement, a trait that has been programmed into their matrix by humans and adapted by the machine.

The Next Generation also introduced Star Trek’s most deadly enemy, The Borg; a species that rather than reproduce, conquers and assimilates other species into its collective by injecting nanoprobes (microscopic robots) into the bloodstream of its victims. These nanoprobes change the genetic structure of the victim, allowing machinery to be implanted inside and upon the body and to replace arms and legs with mechanical limbs. Perhaps in a futile attempt to breathe new life into Star Trek: The Motion Picture, a Borg origin story was alluded to in the extras of the DVD release of the movie and the same theory has been added to The Star Trek Encyclopaedia. In the film, V’ger is conceived has having been adapted by a species of living machines from a planet an incredible distance from Earth. These living machines are presumed to be an early incarnation, or possibly a subspecies of The Borg. The Borg are living bondage; mindless automatons subservient to a Borg Queen. Even their attire resembles a gimp outfit: tight restrictive leather suits, mouths and eyes covered or sealed shut. When we first meet The Borg Queen in Star Trek: First Contact (1996) it soon becomes obvious that her role is that of a dominatrix: she is the mistress to her subordinates and oozes a hypnotic sex appeal.

The exploration of the relationship between man and machine in Star Trek throws up an interesting conundrum. Whilst the crews of the Enterprises strive to pursue and embrace technology and emotionally connect with machines by programming rudimentary emotive longing into their matrix, machines unstintingly strive to be more human or seek a form of humanity that the programming lacks by forming sexual or emotional connections with man. In a sense, the Enterprise crews have inadvertently programmed their own enslavement to machines by expecting so much fulfilment and instant gratification from them. In Star Trek, we see machines sexualising mankind, a role reversal if you will, in which the exploited becomes the exploiter.

Our own very real sexualisation of technology has already begun in the way the latest gadgets are advertised and presented to us. By preaching to consumer’s sense of vanity, they encourage desire of the newest, shiniest and slickest technology available, and sexualised imagery sells these objects in an efficient way. Sex with mechanical instruments, such as vibrators and masturbation machines, has been well established since the sexual revolution of the early 1960’s. However, more recent sexual devices have become much more complex, and certainly more mechanical and monstrous looking, leading one to conclude that the next stage in this progression is to follow the path to which Star Trek: The Motion Picture has hinted. This leads us to presume that in our own future as technology develops we may enter into a disturbing and terrible relationship with machines in which mankind endeavour to become equal on an emotional level, whilst machines in turn view us as sexual conquests in order to achieve humanity. Star Trek: The Motion Picture may one day be seen as prophetic.

Stephen Lee Naish has tried a little bit of everything in his 31 years on Earth. In 2006, he founded a one-man film production company, Framedropfilms, which produced music videos and documentaries for bands and artists mainly in the United Kingdom and North America. He eventually settled on writing about film instead of making them. His writing examines more populist films and actors through lenses of politics, philosophy and popular culture. Until recently, he edited and contributed to a history and politics online literary review magazine called The Chronicle for Waterstones Booksellers in the UK. He is British, but live in Ontario, Canada with his wife Jamie and son Hayden.