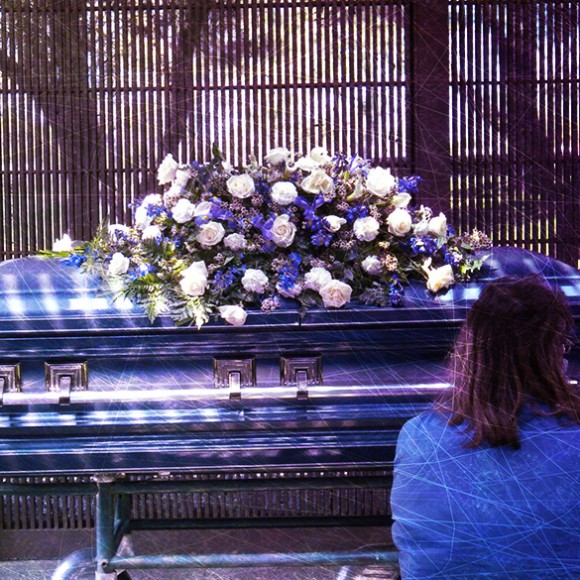 Angie could recall every detail of the burial of her father. It was the kind of perfect, balmy day that occasionally happens in late fall in New England.   The sky sharp and blue, the air warm, even the gentle winds were summer like. The grass still thick and green, swaying with the wind. Only the bare trees gave away the season. It was a beautiful day. Except they were burying her father. Her father, whom she adored, and had been alive and well when she left for school Monday and dead when she got home. A heart attack they told her, out of the blue. There was crying and grown-ups hugging her, telling her to be brave. Telling her how much her father loved her. She hated them all. Even at 14 she knew they would go home and go on with their lives, and she would never again be the girl she was before Monday. She longed to escape and let the ridiculous circus act taking place go on without her. She felt the burning shock and pain of the death of her father, but nothing else.   She had in the past retreated into herself when life felt overwhelming, but this was different.

The church service was a blur, but the burial at the cemetery was burned into her being. Every detail was still crystal clear. Angie clung to her Mother’s hand, feeling it was the only way to make sure her mother didn’t disappear too, as she now knew people could do. She watched the beautiful casket, with the seagull decorations they had chosen because her father loved the beach, being carefully placed at the burial site. There was a sea of people everywhere she looked, some she recognized and some she had never seen before. She sat with her mother and brother in the front row, under the canopy directly in front of the casket. The priest said something she didn’t hear, because his words did not comfort her and did not bring back her father back, which is the only thing she wanted. The crowd stood mostly outside of the canopy, and when the priest finished speaking, they seemed unsure of what they were to do next. Some headed for their cars, but most stayed, because in not knowing what to do, staying seemed safer. The mountain of flower bouquets that were around the casket began being pulled apart and single flowers handed out to the waiting crowd. Angie watched with the same expression she had had at the wake and church service. She had retreated into herself, with no sign of emotion. She certainly wasn’t going to put on a show for the audience of people whom she knew was watching her. She loved her family and wanted to be strong for her mother and brother, but her need to close herself off from everyone else was not something she could control. She didn’t really care what people thought of her stiff, off-putting reaction to their hugs and words.

Angie was aware people were holding their single flowers, and waiting for instructions as to what to do with them. She was mildly curious herself. On some cue from someone in charge, everyone began placing the flower they had been given on top of the casket. It took what seemed forever for everyone to place their flowers, but finally it was done. Angie watched with growing interest what would happen next. A moment or two passed, and then two men in work clothes appeared. They quickly went to work, doing what was obviously a routine part of a day’s work, and had no meaning or significance to them. They had two more burials that day, shitty work, but at least the weather was good. The two men were a little surprised at how many people were there watching. Often times the family and funeral attendees had left by now, and the men did the actual burial alone, unless of course, it was a Jewish burial. The smaller man, who seemed to be in charge, motioned to the other man that it was time to begin. Angie watched as the men adjusted the large pulleys and bands around the coffin. Suddenly the silence was broken by the cranking noise as the men began lowering the coffin into the hole. Angie forgot her pain for the moment as she became transfixed on what these men were doing to the coffin that held all that was left of her father. The warm gentle winds would occasionally blow her long, golden strands of hair. She mostly ignored them, only occasionally pulling a strand away from her face. Her hair color was the kind of almost iridescent gold that only young girls have. The kind of color that older women spend a small fortune later in life trying to get at high priced salons, but never achieve. The men worked efficiently and quickly, working the crank, stopping, adjusting the bands around the coffin, continuing the crank. It seemed no one could take their eyes off the men’s work. It also seemed the family and friends gathered there should not have been watching. They should have been in the basement of the church eating and talking. Yet, everyone continued to watch. The casket finally started to make progress in disappearing into the prepared hole. Angie, still intrigued by the process, felt nothing as the casket left her sight and continued its descent into the deep hole. The two men abruptly walked away, and the crowd finally began heading for their cars. Watching the lowering of the casket into the dark, cool earth left everyone feeling a sense of their own mortality, yet the warm sunshine and dry, beautiful air felt so uplifting and life affirming, that it seemed to quickly melt away the uneasy feeling they experienced witnessing the fragility of human existence. Mark was a fit, healthy forty-eight-year-old; no one expected this. His sudden passing made everyone feel vulnerable.

Angie lingered at the gravesite, not so much because she was saying goodbye, but because a part of her wished she had a dark hole to hide in.   Her ability to disappear into herself was as much a mystery to her as it was to her family. Her younger brother was so different. He stayed on the surface of life. If he was down or upset, he could be over it and laughing within minutes. Angie could not do that. Once she lost her feeling of connection to her friends and family, she stayed gone for a long time. Anyone’s attempt to pull her out of herself resulted in her lashing out in anger. She only gradually thawed from her retreats, on her own timetable, at her own pace. As she stared at her father’s casket in the dark hole, a part of her felt she knew that place. It was comforting.

Angie stood on a busy street in downtown Boston waiting for a tow truck. In the ten years since her father died, she graduated from college and was now working as an account director at a Public Relations firm. She had moved up quickly, and the owners of the firm had high expectations for her future with them. Her relationships with people were another matter. She still struggled with those. She was currently involved in an often difficult long term relationship with a boy she met in college. Her cell phone was ringing, and it was him, Steve. She explained her car would not start, and a tow truck was coming. He was concerned for her, but also worried about the plans they had for that evening.   He had an important work function that night, and he needed her with him. No, she told him, she didn’t need any help. She never did, that was part of the problem. She told him she would call him later. She liked Steve, not sure about love, and kept him at a distance, which he tolerated because he loved her and assumed she would come around. Angie was pretty sure she would not. She hung up the phone as the tow truck appeared. The man got out and confirmed that Angie was the customer and the car she was standing in front of was the one in need of towing. The man began the process of hooking the car up, but not before giving Angie a quick appreciative look. She was a very pretty woman, long blond hair, electric green eyes against dark long lashes, a good figure, not the waif figure so many girls strived for, but a good full figure. Her face usually held a serious expression, but when she smiled her face opened up, and people tended to want to smile back because you got the impression the smile didn’t happen on a regular basis, so you were witnessing something special. It took the man no time to secure the car, and he then flipped the switch to lift the front end up. The sound was not exactly like the cranking noise when her father’s casket was lowered into the ground, but it still immediately took Angie back to the perfect, late fall day, and the waiting hole. She still longed for her own hole to hide in at times. She tried to fight the feeling of being disconnected from her family and friends when she felt it coming, but she usually lost the struggle. She sometimes thought she was just a loner by nature, and losing her father only reinforced her feeling that this world, this life, was not a place she entirely felt she belonged. She couldn’t remember ever experiencing a feeling of great joy, and other than losing her father, she had no real great feeling of sorrow she could recall. It was, she believed, simply who she was. Losing her father was tremendously painful, and it confirmed what she had suspected since she was very small, that feelings were best avoided.

The tow truck driver was trying to tell her he was finished and would need her triple AAA card. Angie opened her purse, took out her wallet and handed him her card.   After the paper work was done, she signed her name, thanked him, and watched her car disappear into the traffic of downtown Boston. She stood another moment or two and then headed back to her office. Her phone rang; it was Steve again. She knew he would offer, almost beg, to let him pick her up and take her home. She decided not to answer it. She thought a moment and then turned the phone off. She would take the subway home; she liked the subway. She felt at home as the train left the street and headed down to the cool, dark, quiet world of the underground.

Karen Erwin is a graduate of Louisiana State University where she majored in English Literature.  A native of New Orleans, Karen moved up north to pursue a career in academia at Boston University. In 1999,  she left BU to become a full-time mom and part-time writer. Over the years Karen has written a number of short stories and recently, her first song. She continues to pursue writing and in her spare time can be found learning the piano or strumming her guitar.