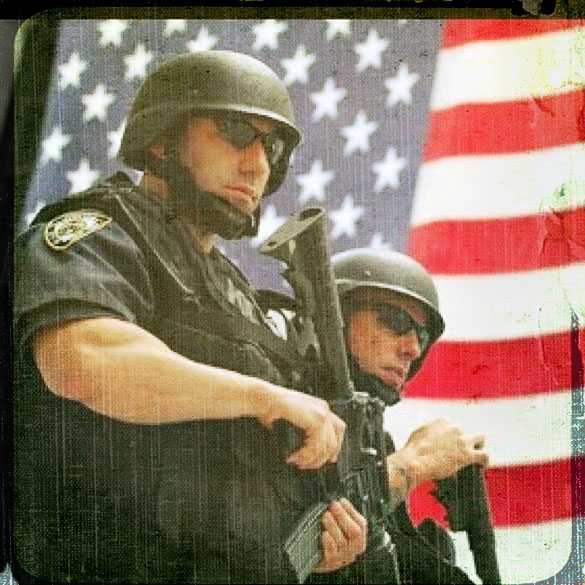 “We live in a small rural town. Moved here in 1961. I don’t remember what year the State Troopers moved a headquarters into our town. Our young people were plagued with tickets for even the smallest offense. Troopers had to get their limits for the month. People make jokes about that but it has been true. Every kid I knew was getting ticketed for something. But now it is so much worse. I raised my kids to respect police. If they did something wrong and got caught they deserved it and should take their punishment. But now I have no respect for the police. I feel threatened and fearful of them. They are aggressive and intimidating. They lie and are abusive and we do not know how to fight them. I am not a minority here but people are afraid if they speak out they will be targeted. We are just a small town. I just don’t care anymore if they do target me. I am afraid they are going to kill someone.”—Letter from a 60-year-old grandmother

The following incidents are cautionary tales for anyone who still thinks that they can defy police officers, even if it’s simply to disagree about a speeding ticket, challenge a search warrant or defend oneself against an unreasonable or unjust charge, without deadly repercussions. The message they send is that “we the people” have very little protection from the standing army that is law enforcement.

For example, Seattle police repeatedly tasered seven-months pregnant Malaika Brooks for refusing to sign a speeding ticket. While Brooks bears permanent burn scars on her body from the encounter, police were cleared of any wrongdoing on the grounds that they didn’t know that tasering a pregnant woman was wrong.

Eight Los Angeles police officers fired 103 bullets at two women in a newspaper delivery truck they mistook for a getaway car during a heated manhunt. The older woman was shot twice in the back and the other was wounded by broken glass. The women were offered a $4.2 million settlement for their injuries, while the officers were reprimanded for acting inappropriately, “retrained” and put back on the streets.

During the course of a routine investigation, a group of Los Angeles police officers beat, punched, and tasered Kelly Thomas, schizophrenic, homeless and suspected of vandalizing cars, until he was brain dead. The two officers charged for their role in the beating were acquitted and will face no time in prison. A third officer who was supposed to be charged will also walk free.

New York City police, pursuing a man who had reportedly been weaving among cars in Times Square, fired into a crowd, shooting a 54-year-old woman in the knee and another woman in the buttocks. Although the officers faced no repercussions for their reckless behavior, prosecutors charged the suspect with felony assault on the grounds that he was responsible for the injuries caused by the police.

Chicago police arrested, beat, and sodomized with a gun Angel Perez, pushing in his eye sockets, driving his elbows back into his head, and sticking a gun into his rectum, all in an effort to “persuade” him to be a drug informant. All of the officers remain in active duty, patrolling the streets.

Houston police shot and killed Brian Claunch, a mentally ill double amputee, who had refused to drop a ballpoint pen. The police officer was cleared of any misconduct and remains on the force. Curiously, in the last six years, the Houston Police Department has yet to find a single police shooting unjustified. Between 2007 and 2012, the HPD officers injured 111 civilians while fatally shooting 109 people.

This phenomenon we are experiencing with the police is what philosopher Abraham Kaplan referred to as the law of the instrument, which essentially says that to a hammer, everything looks like a nail. In the scenario that has been playing out in recent years, we the citizenry have become the nails to be hammered by the government’s henchmen, a.k.a. its guns for hire, a.k.a. its standing army, a.k.a. the nation’s law enforcement agencies.

Indeed, there can no longer be any doubt that armed police officers, the end product of the government—federal, local and state—and law enforcement agencies having merged, have become a “standing” or permanent army, composed of full-time professional soldiers who do not disband. Yet these permanent armies are exactly what those who drafted the U.S. Constitution and Bill of Rights feared as tools used by despotic governments to wage war against its citizens.

That is exactly what we are witnessing today: a war against the American citizenry.

Let that sink in a moment, and then consider that not a day goes by without reports of police officers overstepping the bounds of the Constitution and brutalizing, terrorizing and killing the citizenry. Indeed, the list of incidents in which unaccountable police abuse their power, betray their oath of office and leave taxpayers bruised, broken and/or killed grows longer and more tragic by the day to such an extent that Americans are now eight times more likely to die in a police confrontation than they are to be killed by a terrorist.

Making matters worse, when these officers, who have long since ceased to be peace officers, violate their oaths by bullying, beating, tasering, shooting and killing their employers—the taxpayers to whom they owe their allegiance—they are rarely given more than a slap on the hands before resuming their patrols. Ironically, even when the victims are awarded multi-million dollar settlements to compensate for the injuries suffered at the hands of out-of-control police, amped up on the power of the badge and the gun, it’s the taxpayers who must sacrifice, scrimp and save in order to pay for their transgressions, all the while, the officers, never held accountable for their actions, continue to collect regular paychecks, benefits and pensions.

Before I am drowned out by howls of outrage from those who consider all individuals in uniform blameless and noble to a fault, let me acknowledge that there are undeniably many honorable law enforcement officials (some of whom are among my closest friends) who strive to abide by their oath to uphold the Constitution and serve and protect the citizens of their communities. However, they are fast becoming a minority in a sea of police officers who take advantage of their broad discretion and repeatedly step beyond the bounds of the law, ignoring their responsibility to respect the Bill of Rights. These latter individuals are little more than vigilantes—albeit vigilantes with a badge—and our communities are presently being overrun by individuals entrusted with enforcing the law who are allowed to operate above the law and break the laws with impunity.

This lawlessness on the part of law enforcement, an unmistakable characteristic of a police state, is made possible in large part by police unions which routinely oppose civilian review boards and resist the placement of names and badge numbers on officer uniforms; police agencies that abide by the Blue Code of Silence, the quiet understanding among police that they should not implicate their colleagues for their crimes and misconduct; prosecutors who treat police offenses with greater leniency than civilian offenses; courts that sanction police wrongdoing in the name of security; and legislatures that enhance the power, reach and arsenal of the police.

As I document in my book A Government of Wolves: The Emerging American Police State, we’re entering the final phase of America’s transition to authoritarianism, a phase notable for its co-opting of civilian police as military forces. American police forces were never supposed to be a branch of the military, nor were they meant to be private security forces for the reigning political faction. Instead, they were intended to be an aggregation of countless local police units, composed of citizens like you and me that exist for a sole purpose: to serve and protect the citizens of each and every American community.

As a result of the increasing militarization of the police in recent years, however, the police now not only look like the military—with their foreboding uniforms and phalanx of lethal weapons—but they function like them, as well. Thus, no more do we have a civilian force of peace officers entrusted with serving and protecting the American people.  Instead, today’s militarized law enforcement officials have shifted their allegiance from the citizenry to the state, acting preemptively to ward off any possible challenges to the government’s power, unrestrained by the boundaries of the Fourth Amendment. As journalist Herman Schwartz observed, “The Fourth Amendment was designed to stand between us and arbitrary governmental authority. For all practical purposes, that shield has been shattered, leaving our liberty and personal integrity subject to the whim of every cop on the beat, trooper on the highway and jail official.”

This brings me to the looming question, the one to which there is no easy answer: what can “we the people” do to protect themselves from the police? While there are scattered attempts to combat police abuses underway, ranging from increased surveillance of on-duty police officers through the use of lapel cameras, and campaigns to film police interactions with one’s smart phone, to legislation authorizing citizens to use force against a police officer who is acting unlawfully, few bring about any lasting change.

The solution is far simpler yet so much more difficult to achieve. As with all things—no matter what level of government, whether you’re talking about abuses within law enforcement, Congress, the National Security Agency, or within your own community—for real change to occur, it will take Americans getting outraged enough to speak up and speak out. It will take them showing up at City Council meetings, picketing in front of police stations, and demanding that their concerns, complaints and fears about police brutality—not only for themselves but for their fellow citizens of lesser incomes, darker skin tones and questionable lifestyles—be acknowledged and acted upon.

To put it another way, there can be no hope for freedom unless “we the people” recognize that every time the police shoot an unarmed citizen, taser an elderly person, or beat someone senseless or crash through a homeowner’s door, they are really shooting me, tasering you, and beating senseless your children, your neighbors and your loved ones.