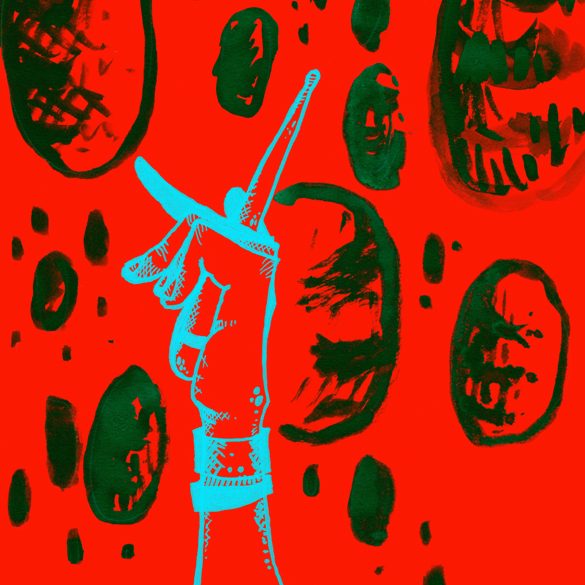 I left the recent Purity Ring concert with two predominant thoughts. One, that magic might actually be real, but real in a terrifying and vaguely apocalyptic sort of way. And two, that a conversation about live set of Megan James and Corin Roddick, who make up Purity Ring, would be crippled without some remarks on the album as well. Their musical canon consists of just one album, Shrines, and as such Purity Ring inhabits a moment when their recorded album and live performances are fundamentally one body (a situation which works particularly well for them, because Shrines is itself sort of a singular idea manifested in eleven subtly differing tracks). So instead of a simple concert review, I’d like to offer, without further preface, the following review of Shrines holistically, both as recorded album and as performed set.

At its roots, my emotion for Purity Ring’s music stems mostly from their execution on concepts of the occult. Not only do aspects of their production flirt with notions of grim fantasy, but the entirety of their art brings those notions to total and robust fulfillment. In many ways, actually, their music accomplishes what that old swindler, the ouija board, falsely promises curious children everywhere. I remember that my interest in the ouija board was, to be sure, mostly intended with youthful whimsy, and yet there was also a vague yearning for something dark and incomprehensible – even more, that by putting my fingers to that discolored wooden cursor, I might be, myself, the vehicle of expression for that dark presence in my world. In every aspect of their music – noise production, lyrics, and performance – Purity Ring makes good on that promise, deftly straddling that line between modest innocence and morose horror, and bringing the two worlds into seamless, singular fulfillment.

The music of Shrines begins with a sonic framework that marries pristine, Bjork-esque vocals and accompanying synth chords with sinfully danceable percussive patterns and tenacious quagmires of bass. Followers of the recent indie music scene may recognize similar patterns of sound from artists like The Knife or Jamie Smith of the XX, but for Purity Ring this aesthetic is incorporated cohesively into lyrics and performance to develop thematic dimension beyond merely groovy noise. Megan’s clear, ethereal voice is a vehicle for lyrics which explore concepts as simultaneously endearing as they are grotesque. In Belispeak she sweetly addresses her “Grandma” and shares childish half-understandings of her stomach rumbling (“when my little belly speaks”). But then, after chastising herself demurely for having “been unruly / in my dreams and in my speech”, she nightmarishly suggests as censure: “drill little holes into my eyelids / that I might see you when I sleep”. This in particular is what so clearly conjures my memories of approaching the oujia board – my intentions so entirely childish, but so entirely cabalistic at the same time. Unlike my own experience, however, Megan’s invocations are hardly unrequited, as Corin’s production throughout Shrines stands as powerfully dark fulfillment to the entreaties of her words, taking Megan’s lyrics and transforming them. Her pristine voice is slowed, spliced, and reverberated. It is surrounded by the chants of a phantom chorus. It is echoed back at her from subterranean depths. Just as Megan’s lyrics almost sweetly ponder haunting bodily deformation, the sound of her pristine voice extends itself only to be ghoulishly mutated by Corin’s manipulations. The effect is perfect and brings cohesive unity to the themes behind both the words and the sounds of their music.

Attending their recent performance of Shrines at The Southern, I was delighted to discover that this conceptual framework extended to their live show as well. Hanging over the stage was a massive dendriform fixture of suspended controllable light globes. As she sang, Megan would wander languidly about it, responding to the lights as they were variously illuminated according to the output of Corin’s live production, the very input of which were Megan’s own vocals. The overall effect was remarkable, as Megan was both an independent creative source for the experience but also audience and object to the magic that she unleashed. Unlike listening to the recorded album, witnessing them live was to be behold her voice simultaneously as raw sound and as produced noise through Corin’s handling. This too was rewarding, as it conjured at each moment the conceptual relationship behind all of their music, of demure resplendence causing and becoming vessel to a dark and magical power. I doubt too that I was the only one that night who fell victim to their enchantment, as the collective energy of the audience around me never once dimmed or wavered. We were at all times captivated, whether thrown into the swing of frenetic, dance-worthy interludes or bewitched to tenderly hover above disquieting vocal chasms. By the show’s end, Shrines had proved itself as both a recorded album and a performed set to be a mesmerizing piece of work, and in that endeavor at least, Purity Ring’s charms will not shortly fade away.