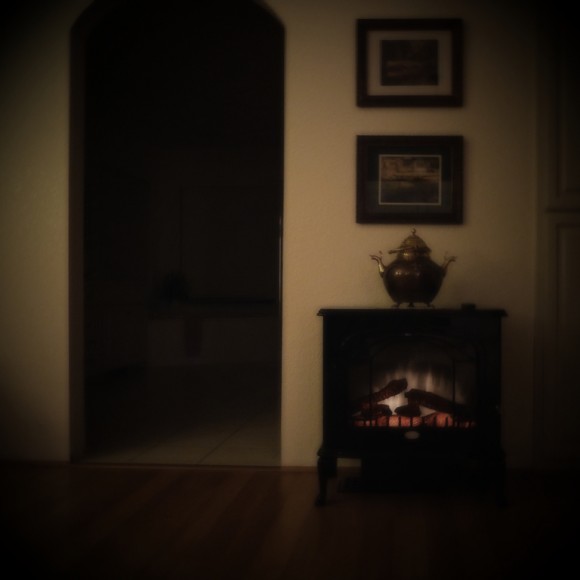 Except for being a little heavier
The air feels mostly the same,
calling for sweatshirts instead of t-shirts.

I walk up the hill
to the red wood siding house
that once moved its driveway
half an inch over
since it was on our property.
My father watched men rake the gravel
in overcast filthy grey light
and said they were insane.

Inside Mrs. Johnson wears her hair
in a blue-grey beehive
and her glasses grow her eyes
into puddles of ink.
She advises me to know the women,
to love the women
for no particular reason
while nervously watching me
through the clouds of dust puffing up
as I rape music on her old or antique accordion.

He and I walked the long walk
to the river,
jumped the chipped paint pipes of the refinery,
caught sunnies in chicken wire,
water to our knees, and
sometimes the cops stopped on by,
told us to get lost.
He said they had no life,
grumbling about higher crimes.
Then one day without cause
between the biting cold and snow’s first fall,
he died.

I enjoy the warmth of mugs—
lumpy clay and smooth ceramic
with his wife
several times that winter.
She teaches me
to read between the veins of the tea leaves.
“Your fortunes not the bird, but its feathers and its prey”

Now I drain the river
of the long walk
mugful by mugful
grumbling for that water to get lost.
She can no longer make the boil
and I am old enough
to work the cold electric stove.

Their drool pools and drips
onto every city’s loading docks
Where they’ve been forced to live.
Acidic and it bores a hole to the earth’s basement
to reveal the flames of storage,
the glow impelled
floods upward in bestial distribution.

Now everyone I know
is lost in the fire or its light.

Now everyone I know
is a shiver in the basement
or a sweat bead in the attic.

Now everyone I know
is lost in the fire or its light.

The Baby Cries over Nothing and Breaks My Heart

From head to toe, the baby’s body squirmed—a bug under attack. She curls up tightly and struggles. Trying to exert the force to disappear. She vanishes into herself and keeps exanimate. The evidence of this is in the moan. It squeaks from her throat, which sounds shrunk to half-size. She is wheezing. She has one balled up fist. Her toes curl as limbs contort. The child was lost in the thick of it.

The Hunter and the Human with a Rifle

The scent of mountain quail trapped
within a setters’ cold black nose.
As jagged rocks slice his
paw’s pads,
streaks of blood
dry up on branches
bent and grass
pressed flat.
Ain’t it like the artist
to always sign his craft?

And ain’t it like that bastard man
to always steal the prize?

Sucking meat off the bone
while the hunter
licks his wounds like lovers.

The Drunk and the Dreamer

Had he walked in with a bonus,
a raise, carnations, an affair—
one thing to satisfy
his want to be needed,
her need to be wanted

The house would creak, crack, and thaw out
Like ice cubes dropped into a glass
of iced tea—snap, shard, and
eventually attach
onto one another.

David Remer is a native of the Hudson Valley, the heart of New York. It is a unique region where mountains scrape the sky and the roar of nature endlessly fights and fades against the trumpery of an unfortunate city. His work consists primarily of poetry and short stories and can be found in publications such as Chronogram. He is currently pursuing a bachelor’s degree in Creative Writing. If you would like to know more, then remind yourself that privacy is a precious commodity in this interconnected world and enjoy the rest of your day.