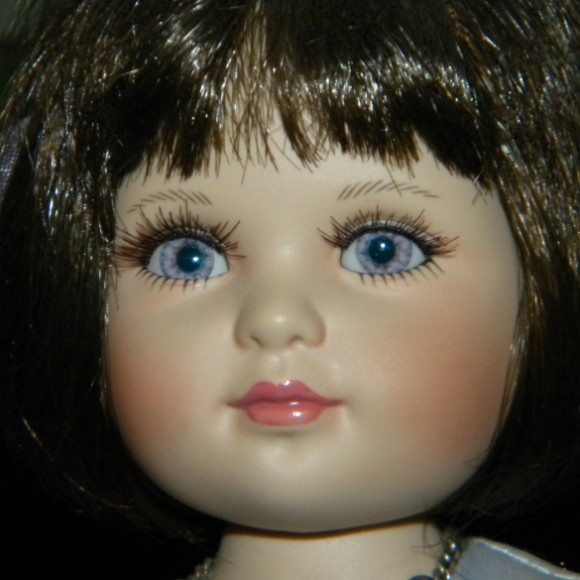 Melissa Mendelson’s Porcelain, a horror novella in her upcoming Notebook Stories series, features Paige and Shelli, sisters spending a seemingly monotonous summer together with family in a middle-of-nowhere town. Troubled Paige and troublesome Shelli, exploring the few entertainment options this little Hicktown has to offer, happen upon an eerie antique store, and here begins the story’s classically frightening arc – a large ominous window hides the store’s angry shopkeeper and his angry, potentially possessed porcelain doll. With resentment for the insane shopkeeper and well-intentioned pity for her sister, Shelli brings the doll home for Paige’s amusement – but who will become the real plaything as the tale unfolds?

Although Porcelain follows the pattern of most other horror films and novels, it begins more like a family drama than anything else. Sisterly arguments and admonishments from the girls’ Aunt August make up the majority of the first several chapters, but the genre’s character types appear in true form. Paige is oddly clairvoyant, while her family remains completely oblivious. They lead normal lives where nothing extraordinary ever happens.

That being said, the piece also retains a sense of tension that creates an all-fearing, paranoid atmosphere for the reader. Phrases like, “Who could possibly be knocking at the front door?” and, “Paige froze, sensing someone behind her,” seem to gear up for the beginning of gore, but they turn out to be simply unexpected events and keep the reader guessing. This teasing continues for a tad too long, perhaps taking advantage of an inevitably expectant audience, but is not overwhelming or disturbing by any means.

Indeed, the real terror doesn’t start until about twenty pages in, when Mendelson skillfully inserts several obvious, earnest signs that the roller coaster ride will soon start. At this point, the sisters have arrived on the town’s main street, so to speak, which the author describes as “something like out of Stand By Me or Under the Dome,” finding the perfect comparisons to create the ominous small town in readers’ imaginations. The sisters happen upon the “decaying, white structure” that is the antique store; upon entering, Paige passes a monkey figurine that “clapped its cymbals together” as the lights flicker overhead. No more teasing or guessing; the suspense ends now. The press copy of the story ends soon after however, and readers must await the full release of Porcelain for just a little longer.

Short horror tales are usually full of unrealistic fanfare and choking suspense immediately upon introduction of the conflict, but readers be assured that Mendelson’s tale won’t drop you into the action cold turkey. With class and finesse, she spends time building her characters and increasing horrific tension in carefully measured increments to lay out a really fantastic reader experience.

As a rampant author of short stories, poetry, and fan fiction, Mendelson pays homage to Stephen King several times throughout the piece, with references to Stand By Me and Under the Dome as noted above, as well as the appearance of his famed killer-clown novel, IT. Paige loves all things scary apparently, movies, literature, and toys it would seem, which is perhaps where she garners her supernatural clairvoyance. The author is obviously a fan of King’s work, and it’s reasonable to assume that he provided inspiration for Porcelain.

She says the entire Notebook Stories series was written during her high school years, serving as a private means of creative expression in those angsty, grungy years before the turn of the century.

“Porcelain is the first [attempt] to blend my life into fiction,” she says of her work, although it’s unclear as to which character Mendelson parallels herself.

The story is as yet open-ended. A love story may be in the works, but probably not one to appear as a central plot element; characters may die and evil may continue to reign, but the forces of good won’t go down without a fight. It seems as if this tale will be firmly anchored in a love of pure horror; readers can safely assume that Mendelson’s dedication to and care for her work is complete and strong, and this will certainly shine through.

Associate Editor Candace Carter is a history major at the University of Virginia; when she’s not writing for The Cavalier Daily, she spends her time reading and watching German films. Her work with Gadfly is endlessly rewarding and enjoyable, and she wouldn’t trade it for the world.