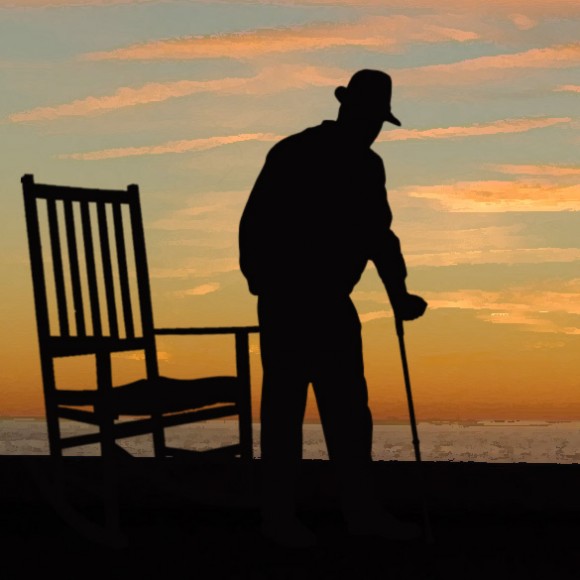 Time and life had left their mark on him; his hair had turned white; his once muscular body had grown fat and weakened from hard work and heart disease. His favorite past time was sitting and reminiscing about his childhood days.

He looks into the distance as he recounts living in Cardin, Oklahoma back in the late 1940s and 50s. Cardin was one of the over-night mining towns that sprang up in northeast Oklahoma. Rich deposits of lead and zinc were found, and the mining industry was booming. His mother, Marlene, worked in the sewing factory in the nearby town of Commerce, Oklahoma. The sewing factory made Glenn Berry’s uniforms and various other items for the military.

He had an older sister, Elaine, and a younger brother, Gene. It seemed they were always hungry, as growing children were known to be. Being the older brother and man-of-the-house, he was always trying to find ways of acquiring food for his family.

Beans and cornbread were the common meal on their table. He recalls his dad had been in the Army, and when he had mustered out of the service, he had changed. He knew his dad liked to hang around in the honky-tonks, which were on every corner in the small towns of Picher, Cardin and Quapaw, Oklahoma. Sometimes his dad would go out-of-state to work on jobs; he was relieved when that happened because that meant he would not have to sit in the car outside of the beer-joints, while dad was in talking with his cronies. This often happened when his dad decided to take his boy to town. One time it grew late and dark, and he was trying to be brave for a five-year-old boy; he remembers being so scared and hungry, yet knew he had to stay in the car.

His Aunt Louise and his mom finally came to get him; his aunt had a tight, closed look on her face, and his mom just looked embarrassed and worn out.

His paternal grandmother lived just two blocks away from his own tiny, frame house. He loved to go over to her house, hoping she might give him something to eat. She had two refrigerators that always had lots of food in them. She was of German heritage, a largely built woman with a personality that forbade any overtures of friendliness for neighbors or, any kindnesses for his mom. She ruled over his grandpa, who was labeled as hen-pecked, so he was not an ally. Grandma Schuster certainly did not like him or his siblings. Her son, Webster, his dad, was the apple-of-her eye. He could do no wrong in her eyes. Danny couldn’t understand why she would let him, his brother, and sister go hungry.

He smiles when he recalls how, when he was around seven-eight years old, he would sneak into her garage, when his dad was out-of-town working on jobs. His dad had all kinds of rods and reels, cane fishing poles and tackle stored in his mom’s garage to keep them hidden from his boys. There was all kind of strip-pit ponds around the area, and they were full of sun-fish, catfish and bass. He figured he was gonna’ “go fishin” to get some food for his mom and siblings. He borrowed a cane pole, a little packet of brass hooks and a stringer; he made sure the coast was clear then headed to the fishin’ pond.

He smiles again when he explains how he didn’t have any bait, which would have brought the bigger fish around; it seemed those hungry, little sun-fish didn’t care. The shiny brass hooks on the line were enticing enough bait. He caught a whole stringer full of those pretty, frisky fish. It didn’t matter that they had little flesh on them. He knew his mama would fry them up, and they would have something more than brown beans and cornbread for supper that night.

Sure enough his mom praised his catch, he remembers. She knew how hungry he always was and how determined he was to be the provider for his family. She really didn’t like cleaning fish or any wild game; however, she put those fish in the sink in a dented old wash-pan full of water; put a big old fryin’ pan on the stove with some lard in it, and, with a determined look on her face, she started cleaning those fish for her children. Now you gotta’ know, he looks at you and smiles, those fish had a lot of little bones and you sure had to work at it and be careful to get any meat off of them. Mom always had slices of bread ready in case we accidentally swallowed one of those tiny bones. Nodding his head, he says,” boy did those fish taste good.”

Phyllis Hallett, 69, lives in North Miami, Oklahoma. She is the mother of two sons and one daughter: Scott, Sheri, and Rory. She is currently working for the Experience Works Program as an employee counselor helping seniors 55+ learn new work skills. In addition to that, she is also working towards her associate degree at NEO A&M College after entering during the fall semester of 2012. With a 4.0 GPA, she has been named to the President’s Honor Roll at NEO A&M. Outside of NEO A&M, she is active in the United Methodist Women Conference and she is President elect of the Green Country District in the Oklahoma Conference. While she’s not participating in any of the above activities, she enjoys writing, reading, gardening, traveling, horseback riding, singing, and playing the guitar.