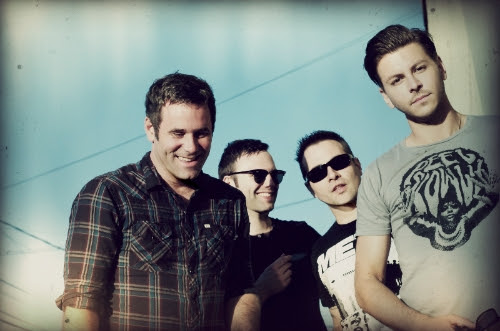 Meet Black Whales, a Seattle based, psych-pop band. This group is adding something new to the pop music scene: a layer of “brokenness.” These guys are walking alongside of the sugary, sweet pop scene and adding their own depth and darkness. The band continues to develop and mix up its sound, never settling on one specific genre but rather fusing several together. Black Whales has recently finished their LP “Through The Prism, Gently” which is set to release November 11, 2014. This LP features a variety of influences and production styles, creating a sound unlike their earlier projects. Find out more about the band in the interview below, and be sure to check out their latest single “Tiny Prisms.”

Black Whales: We’re from Seattle. We put the band together at the end of 2008 after other bands we were in at the time split up. The guys I was playing with wanted to keep playing and we already had a space, so we put some songs together and gave it a name. We were having such a good time and people started coming to shows, so we just kept going!

I grew up trying to play the piano, the violin, the clarinet… but got really tired of the lessons I had to take. My Mom had a classical guitar and she’d play “Blowin’ In The Wind” a lot and I would pick it up and try and play it when she’d leave the room. My dad bought me a drum kit when I was really young and that was the first time I really wanted to sit down and try and figure out an instrument. Sometime in my very early teens, I met a guy who had heard that I played drums and asked me to start a band with him. At some point, shortly after that I got a four track cassette recorder and it’s been nonstop, pretty much ever since.

BW: I think especially right now, we have a couple of different genres going at the same time, but it’s not a new genre, by any means. We are a pop band, with a focus on hooks and catchy melodies, and just kind of letting them be what they are. After we have the basics of a pop song, there’s a fair amount of time spent of trying to ruin it. The way I know we’re getting close to a finished track is if it’s catchy but sort of weird and busted up sounding! It’s funny to spend so much time trying to make pop music, then trying to fight back against that at the same time. I think that’s kind of how I feel we fit into the ‘psych-pop’ category. It’s pop, but kind of broken and odd.

GO: Who would you site as your musical influence?

BW: Personally, when writing and making Black Whales songs, I go to Velvet Underground, 13th Floor Elevators, and later The Beatles for inspiration. There are really too many to name, but I know that if I’m looking for ideas or direction, one of those three makes it happen pretty consistently. I can get really lost in time just listening to music from 40 or 50 years ago. Sometimes, if I’m feeling more of what’s happening now, I’ll listen to White Fence, Tame Impala and a bunch of the earlier Flaming Lips stuff. Between those six bands, you can find the answers to almost anything, I’m pretty sure.

GO: What project are you promoting now? How does this fit into your overall career arc?

BW: We’re releasing our second full-length LP called, “Through The Prism, Gently”. The songs are a little older since it took longer than expected to make the record, but it’s still very much where we want to be in terms of sound. We’ve messed around with pop, folk and garage sounds in the past, but this album is putting more focus on trying to write a create a good tune, then really mess around with it. There’s a lot more experimentation here in terms of arrangement and overall production styles and techniques. This is something we’d like to go deeper into, with future music. Career-wise, I guess it’s just what is going on now… we’ve never really had a plan of what we wanted to create. It’s where you’re at with everything in life that makes the music what it is I think.

GO: How do you communicate with listeners through music? What does music mean to you?

BW: That’s tough. Anybody who makes music is doing it for themselves. I guess with most Top 40 or more commercial music, the goal is to make a trillion dollars, obviously… but I think that smaller bands are doing it out of a compulsion of sorts. You take a lot of beatings being an independent artist. The cards are totally against you. I know personally, I continue to make music with this band because it fulfills something in me and when we make a record or play a show, I feel it working from time to time. People want to hear music and I want to make it for them. That’s about as simply as I can describe the whole thing. It can be really rewarding. It can also reduce you completely!

BW: Singles! I’d really like to release digital singles. I think traditional records are the best in terms of musicality and making a fully formed musical idea…but it’s a long process and it’s expensive. I think taking a break from the full album thinking frees up a lot, in terms of creativity. You get to write one song, do your thing with it, record it and put it on the internet. I think we could have a lot of fun with that and growing, song by song.

2 Responses to Get to Know the Artist: Black Whales