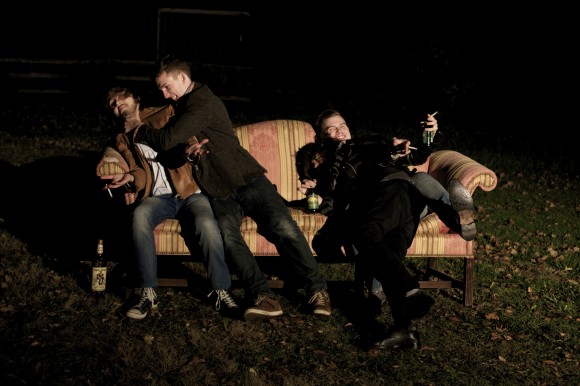 Gadfly Online: Can you provide us with some background? Where are you from? How did you guys meet? What made you pursue a career in music?

Michael Glendening: Oliver, Will, and I met in high school. There were no girls there, so rock music was a good way to relieve frustration. For some reason we decided to take it really seriously, and by the time we left high school, we realized it was pretty much the only interest we had.

MG: I hate genres. I don’t even know what most of them mean. We make Rock of all shapes and sizes.

MG: The Strokes and Muse are huge for us, as well as classics like Led Zeppelin, but whom hasn’t Led Zeppelin touched—musically not sexually. Maybe sexually. Probably sexually.

MG: All about Empires. We are ridiculously excited to have it out now and the feedback has been great. We’ve even got a music video for our song “Glamorous.” We’re trying really hard to get a bigger image and a bigger crowd so we can show everyone what we’re all about.

MG: Music is a super primal expression, and it seems like the only way to actually feel certain emotions—namely the rock n’ roll emotion centered in the pons area of the brain, so we want to touch people in the pons.

MG: I’m thinking shows at MSG. But in the near future, there are lots of new tracks being [recorded] right now so perhaps another album? Come to shows for previews.

MG: If you’re like us then you want music that just makes you lose it. Hopefully Empires appeals to lots of kinds of people because I want to attract people who aren’t really about defining themselves by their musical tastes but instead just want to hear exciting new music, so excitement is a big reason why.

GO: Can you tell us the story behind your name, “Swanky Tiger?”

MG: Swanky is defined as being stylishly luxurious and expensive. So when you picture a swanky tiger in the jungle, perhaps with a monocle, it just seems foolish not to celebrate such an image.