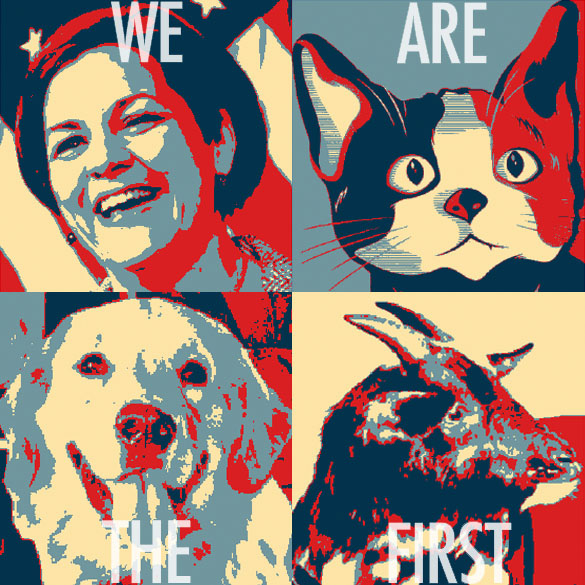 EDITOR’S NOTE: This article was written prior to the September 10, 2013, New York City Democratic mayoral primary.

This November New Yorkers will go to the polls to vote for a replacement for incumbent mayor Michael Bloomberg. Scandals and controversy have blighted the mayoral race so far but for the normal person on the outside looking in, the most interesting candidate is Christine Quinn.

If elected, the 47 year old Irish American Democrat will be the first ever woman to become mayor of New York City. Quinn would also be the first openly gay mayor of the city bursting with a population of over 8 million.

Thinking about the prospects of such a ‘first’ for  New York, I also began thinking of other great ‘firsts’ regarding the outcome of mayoral elections.

In 1868 America saw its first elected black mayor when Pierre Landry, a former slave, was voted in as mayor of the town of Donaldsonville, Louisiana.

The first openly gay mayor of an American city was Annise Danette Parker who became mayor of Houston in 2010.

The first ever (to date!) longest elected mayor in history can be located in Ontario, Canada. Hazel McCallion has been mayor of Mississauga, Ontario since 1978 and has been re-elected without much contest since then!

Mexico recently saw it’s first gay mayor elected in what would be otherwise known as the rather conservative Catholic city of Fresnillo. Benjamin Medrano Quezada, a former singer and nightclub owner, now presides over one of Mexico’s violent cities known for its gang warfare.

In 2007 Rotimi Adebari was elected as the first black mayor in Ireland when he took the chain of office in the town of Portlaoise. Adebari arrived in Ireland from Nigeria only seven years previously when he fled from religious persecution.

In 1880 New York City elected its first Irish mayor in the form of William Russell Grace. He waged a political war against Tammany Hall through his reforms on police and state government corruption and was also the mayor who would receive the statue of liberty from France.

Susanna ‘Dora’ Salter became the first woman elected as mayor in America when she became mayor of Argonia, Kansas in 1887. Apart from being elected mayor she is also the first ever woman elected to any political office in the United States.

The first ever mayor who never even ran a campaign can be found in a rural village in northern Italy. In 2012 50 year old Fabio Borsatti put his name forward on the mayoral ballot as a favour to his friend who was the only person running and who was worried that no one would come to the polls if it were just one candidate running unopposed. Fabio didn’t run a campaign or have any posters or even a manifesto but received 58% of the vote and today still serves as Mayor of the hilltop village of Cimolais.

Bosco Ramos became the first dog in America to become mayor when in 1981 he was elected mayor of Sunol, California. Bosco didn’t enter the race without contest, he had two humans to beat off before he won the election but Bosco’s time as mayor didn’t go without controversy. In 1989 The People’s Daily Newspaper which was the mouth organ of the Chinese Communist party declared that the election of Bosco the dog as mayor in a Californian town was all the proof they needed to show that democracy doesn’t work!

Up in Alaska they favoured the feline over the canine. Since 1997 Stubbs the cat has been mayor of Talkeetna, a town with a population of just under 1,000. Along with being the first cat in America elected to the role of a Mayor, Stubbs can also be considered one of the longest serving mayors in America!

In New Zealand the very thought of a dog or cat taking up the role of mayor seems completely mundane. In the small town of Whangamomona a goat by the name of Billy Gumboot was elected mayor in 1999. He died while still in office in 2001. The first goat mayor in New Zealand was soon replaced by the country’s first ever dog mayor. Tai the poodle served as mayor until an assassination attempt on his life saw the poor dog leave office in 2005. He has since been replaced by a human.

While two legged mayors and four legged mayors have been elected across the globe and heralded as historic ‘firsts’ in their own right, I think Ecuador needs to take the crown in the competition for the ultimate in historic mayoral ‘firsts’.

In 1967 the good people of Picoaza Ecuador voted for the deodorant foot powder Puluapies as their mayor, the first time a foot deodorant was voted mayor anywhere in the world! At the time of the election the company behind the foot powder came out with ad’s that cleverly tied in with the mayoral race with slogans such as ’Vote for any candidate but if you want well being and hygiene vote for Puluapies.’ The majority of the electorate saw it as much more than an advertising stunt and voted overwhelmingly for the deodorant.

Although no dog, cat, goat or even a brand of foot deodorant will be contesting the New York City mayoral election this November, it could still throw up some surprises and perhaps even yet another historic ‘first.’

Lily is 26 years old and from Cork city, Ireland. She is a History & Politics graduate from University College Cork and these days spends her time as a drinker with a writing problem!