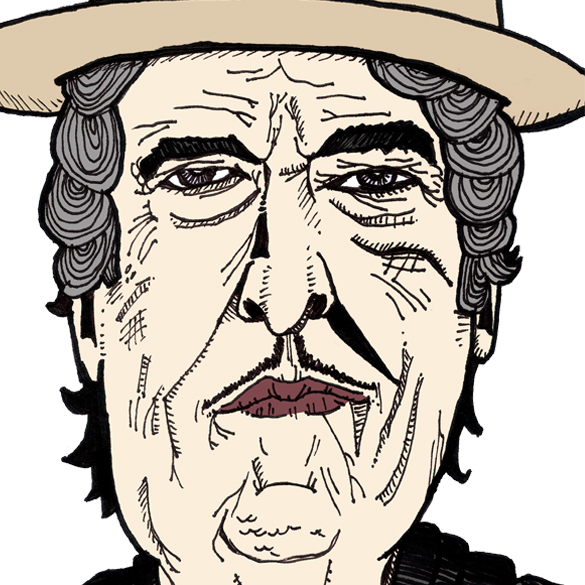 You burned so bright,

Old.  Irrelevant.  Washed up.  Out of touch.  Creatively dead.

Anyone who has followed Bob Dylan’s career over the past half-century has probably applied, or heard some version of these terms applied, to the past ten years—a period that will probably be remembered as the artist’s lost decade. And with some justification.

After all, since 2001, Dylan has given us Love and Theft, Modern Times and Together Through Life, three albums that range from the merely mediocre to the truly awful. Anyone who felt that he had lost his edge is entirely justified.

Well, we will have to admit that, at 71, he is old. But now, as if from nowhere, he’s produced Tempest—and all we can do is simply marvel at how vast is the gulf between Dylan and whoever is in second place among the best songwriters ever.

It’s well to remember that Bob Dylan has recorded over 500 songs. That alone would secure him a pretty lofty place in musical history. But the more remarkable thing is that anyone who grew up with him knows at least some of the words to at least a hundred of them. No one else comes close to matching that.

Tempest is Dylan’s 35th album, and it’s a masterpiece. If you’ve wondered whether he’d ever be able to return to writing with intensity, and passion, and sheer inimitable poetry—or even if you don’t give a damn, if you’ve merely written him off as a faded ’60s relic—you should listen.

It begins innocuously enough, with “Duquesne Whistle,” a jaunty little train song, in a kind of hybrid Dixieland/Hawaiian style, that wouldn’t have been out of place on any of his previous three albums. It’s fluff, but pretty decent fluff, littered as it is with typical Dylan word plays, clever turns of phrase, and allusions, including a line from Gram Parsons’s signature piece, “Hickory Wind.”

(This matter of allusions has caused some critics to label him an outright plagiarist. On Tempest’s “Narrow Way,” for example, he borrows the tag line directly from a 1934 blues tune by the Mississippi Sheiks. Dylan dismissed such criticism in a recent interview, saying:  “In folk and jazz, quotation is a rich and enriching tradition.”  But he’s clearly bothered by the charge, adding that, “It’s true for everybody, but me. There are different rules for me.”  And then he lashes out angrily, saying that “if you think it’s so easy to quote [someone else] and it can help your work, do it yourself and see how far you can get.”)

The light tone of “Duquesne Whistle” doesn’t last long. Almost immediately, we are sucked into a maelstrom of pain, fear, rage, betrayal, violence, blood, death … and, yes, love. Not since Blood on the Tracks, I thought at first. But then I went back and looked at the tracklist from that one, 20 albums ago, and most of it is sweetness and light in comparison.

Tempest’s second offering, “Soon After Midnight,” is a 1940s-style crooner tune about unrequited love.  Sort of.  Because no crooner tune ever had lines like this, delivered as sweetly as you please: “They chirp and they chatter/ What does it matter?/ They’re lyin’ and dyin’ in blood/ Two-timin’ Slim/ Who’s ever heard of him?/ I’ll drag his corpse through the mud.” ‘Nuff said.

“Narrow Way” is a driving rocker. Each verse ends with that line lifted from the Mississippi Sheiks:  “If I can’t work up to you/You’ll have to work down to me someday.”  Is he referring to a woman or to the Lord?  This is Dylan, so it’s hard to say.  And it doesn’t really matter.  But the dark imagery (or is it?) keeps coming: “I saw you buried, and I saw you dug up,” and “Your father left you, your mother, too/Even death has washed its hands of you.”

“Long and Wasted Years” is a ballad with a lovely recurring guitar figure.  Did he write it before or after Barack Obama bestowed the Medal of Freedom on him back in May?  He took a lot of flak after that occasion, because critics thought it was rude of him to keep his sunglasses on all through a ceremony involving the American president.  That he may have written it subsequently is suggested when he sings:  “I wear dark glasses to cover my eyes/There are secrets in ’em that I can’t disguise.”  He’s not alone.

Then we come to “Pay in Blood.” If Tempest had given us nothing else, it would be enough. With it, Dylan hands us his first overtly political song in what seems like forever. It’s unsparing, utterly savage, and one of his best—a blanket indictment of us all, including (perhaps especially including) himself. Not for nothing was Tempest released on 9/11.

In 1972, George McGovern was the Democratic candidate for president. George had a very simple platform, and he expressed it in words that echo mournfully down the past forty years: “I am sick and tired of old men in Washington, in air conditioned rooms, sitting around and dreaming up wars for young men to die in.” Whatever the rest of his political views, McGovern was one of the most decent human beings among major party candidates for president of the U.S. in our lifetime, perhaps the only one.  Yet Americans went out and voted instead, en masse, for one of the most despicable, Richard Nixon—and even more appalling is that for many, they voted for him only because their preferred candidate, George Wallace, an even viler man, had been knocked from the race by a wouldbe assassin’s bullet.

Dylan, presumably upon surveying these past four decades of insane, unrelenting, misbegotten warfare, writes words of disgust like: “Another politician, pumping out the piss,” and “I could stone you to death for the wrongs that you done.”  And each verse’s ultimate line brings the sentiment right back home:  “I pay in blood, but not my own.”  He doesn’t sing it, he snarls it, so tightly miked that it seems as if he’s pouring a cup of vitriol directly into your ear.  His anger is a physical thing, made even more palpable because you know he’s telling the truth. He’s never shed his own blood, or anyone else’s (as far as we know), but he understands there is still blood on his hands, and a lot of it.  And he makes clear that it’s on yours.  And yours.  And mine.

“Scarlet Town” is a banjo-accompanied, Appalachian-style song that references nursery rhymes, Childe ballads, and Ernest Tubb, altho Tubb would probably spin in his grave if he heard lines like this:  “Set ’em up Joe, play ‘Walkin’ the Floor’/Play it for my flat-chested junkie whore.”

“Early Roman Kings” takes one of the most venerable of rock riffs (think “Bad to the Bone,” among many others) and spins it into a tale of our modern equivalents, “sluggers and muggers wearin’ fancy gold rings” and “sharkskin suits.”

“Tin Angel” is a long, bizarre story of adultery—with a hypnotic, metronomic, all but monotonous beat—that would’ve been right at home in Shakespeare’s time and ends with a triple murder/suicide:  “All three lovers, together in a heap/Thrown into the grave, forever to sleep.”

The title cut is generally considered the album’s centerpiece.  “Tempest” is an epic, 45-verse, 14-minute telling of the sinking of the Titanic, set to a simple, fiddle-driven Irish tune.  So much happens in the song that it defies summary, but one notable aspect is Dylan’s homage to the way Hollywood and history now are inextricably entwined in our minds.  Thus, Leonardo di Caprio appears, as Leo (and not the character he played in the movie), right alongside real historical figures like John Jacob Astor.  Why Dylan chose this topic (other than our enduring fascination with the tragedy) is unknown, although a good guess might be because the doomed ship stands as a metaphor for the innate frailty of human life, where the rich and the poor, the good and the bad, the brave and the cowardly, the gambler and the clergyman—none is spared.  All of us, riding our own personal ship of fools, are “sinking/Into the deep blue sea.”

Finally, there is “Roll On, John,” the hauntingly beautiful elegy that closes Tempest.  John Lennon was murdered over thirty years ago, but Dylan has never before written about the loss of his old friend.  Now he lays John to rest with a style, grace, poetry, melody … and love … that are heartbreaking.

In the end, even his own words will not suffice, and he reaches back for William Blake and a child’s prayer:

I pray the Lord my soul to keep,

In the forests of the night,

Cover him over and let him sleep…

For many, Bob Dylan is a decidedly acquired taste. Many more cannot acquire it at all. Dylan is too dense, too abstruse, too arrogant, too difficult, too silly, too politically incorrect, too poor a singer, choose your favorite complaint. One reviewer actually called him senile and/or insane. Thus is genius always treated. Hold a mirror up to people’s faces and a lot of them aren’t going to like what they see.

But miss out on Tempest and you’ll miss an extraordinary experience that deepens with each listening. As the late Kurt Vonnegut would say, so it goes.