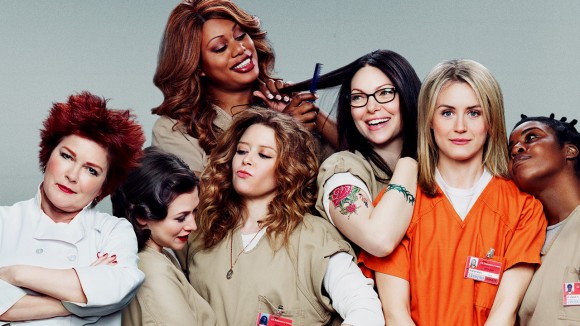 Last year, the critically acclaimed series Orange is the New Black premiered as a Netflix original show. For those who are not aware, the show follows the story of Piper Chapman as she navigates her new life in prison and encounters women from all types of backgrounds and cultures. The show is based on Piper Kerman’s memoir about her life in a woman’s prison, and though the show takes some leisure with Kerman’s life it nevertheless serves as an important marker in television history.

How? Well, I tried to answer this last weekend after I had binge-watched the second season and was asked by someone, why is Orange is the New Black such a great show?

#1: The show is dominated and completely run by female characters, their stories, interests and everyday activities. For once, the female characters outweigh the male characters and these women are not here to fill stereotypical roles at a male’s side. Instead they are fresh, realistic and represent women we encounter everyday. For instance, Lorna Morello could be considered a weak character owing to her infatuation with her fiancé, but that argument would deny the fact thatshe’s allowed to drive the inmate bus as a result of being trusted by figures of authority. Further in season 2, Piper comments to Morello that she was the first person to make her feel welcome and as if she could survive prison. And why is this so great? Because most female characters are either shoehorned into serving some need for the male protagonist, filling a stereotypical role or viciously hating their female counterparts. There is a glaring reality of female characters being killed, depowered or maimed as a plot device instead of helming their own story. Here, Lorna is in love with a man, but ultimately it’s not about him, it’s about her and her story, not his. The show also passes the Bechdel test with flying colors and offers female solidarity while not allowing any female characters to be “refrigerated” for the plot. For once, there is a large group of women who interact, have their own stories and hardly ever talk about a man or need one.

#2: The women on this show are not stick-thin, or perfectly manicured mannequins nor are they fluent in four languages or have completed a master’s degree before age 20. These alluring, dynamic characters are not created using the typical methods. The women on this show represent actual women with various body and skin types as well as many pastimes and occupations. Instead of Hollywood’s representation of a utopian reality, this show actually captures the type of women you would see walking down the street or encounter while shopping in a grocery store. Further, this show does not feature ethnic groups in conventional roles or create characters just to be “kinda” diverse. All these female characters are organic with aspirations and personalities, which are separate from the others. They’re also not created with the mind frame to attract men, but instead to survive prison in their own distinct way. The array of different women further allows women to see themselves on screen in their body types, sexual orientations or interests and find confidence in these portrayals. Because of this, both men and women are reminded of the “beauty myth” Hollywood perpetuates and fortifies the notion that a woman does not have to be beautiful to be desirable or charming.

#3: There is a rising interest in transgender culture, and Orange is the New Black has contributed to this advancement by portraying an authentic perspective. This show introduces perhaps the best-written male to female transgender, who is not polarized and is additionally played by Laverne Cox, an actual transgender. This is important as in view of what happened when Jared Leto won an Oscar for his performance in Dallas Buyers Club where there was a dispute over whether Leto’s role should have been portrayed by a true transgender. Leto’s role in Dallas Buyers Club was a step in the right direction, but Laverne Cox as Sophia proves that audiences are receptive towards actual representation. Sophia and Cox’s entrance into Hollywood has exposed how little people understand about being transgendered and what it entails. The scene I always associate with Sophia is when her wife finally realizes the man she loves wants to be a woman, and she accepts it. Acceptance is a huge theme in the show and furthermore has helped spread to this attitude towards transgenders and their community. Consequently, this show along with others has opened the roads for society to start accepting transgender as a norm and has proved to be successful when Cox became the first transgender to be featured on the cover of Time Magazine. If anything, Cox as Sophia illustrates to the world that being transgender is not a strange metamorphosis, which alienates them from society, but instead shows that they are human. In one scene, Sophia talks about how her son is finally coming to visit her and emphasizes this as a more defining characteristic of Sophia than aswhat gender she used to be.

So what do these three key points mean? These three points were meant to illustrate how Orange is the New Black is moving towards equal representation on TV, embracing women as more than just their body and receiving the transgender community. It shows women with an agenda while also showing the female bond at its strongest. Additionally, the show expresses a message to viewers, both male and female, that women come in all shapes and sizes, have different beliefs, goals, sexual orientations, and images of a successful life. Not a single one is the correct one, but all that matters is achieving what makes you happy.